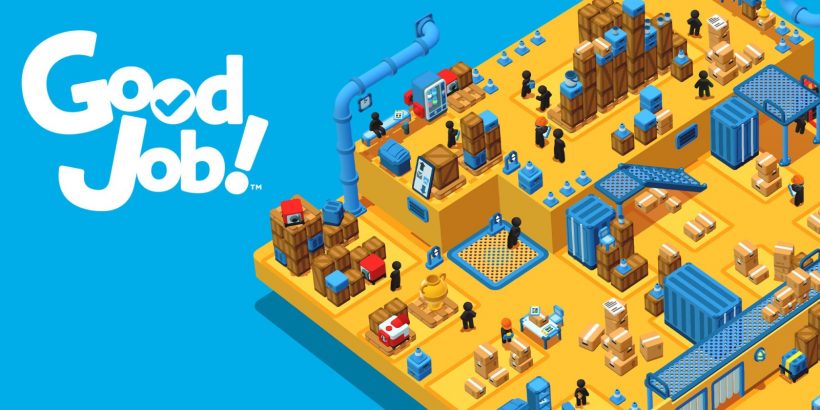 You can always rely on Nintendo to come up with novel concepts for experimental games which release to small fanfare but which then grow a dedicated following.

The Switch library, for instance, has been full of them. Snipperclips was the hidden gem of the system’s launch line-up, and while Flip Wars would later turn out to be a bit of a dud, the joy of the wacky world of The Stretchers still evokes some fond memories. Good Job! has players taking on bizarre workplace-based duties as you attempt to work your way up the corporate ladder, starting as the son of the company boss and working through the floors of the building, quite literally, until you’re at the top.

This is no ordinary workplace, however. It is a workplace filled with featureless black stickmen only characterised by the minimalist clothing which adorns them. Some might be doing manual labour, shifting boxes in the warehouse. Others might be sitting at their desks working hard on their computers. But what they all share in common is that you’re able to make their workplace an absolute demolition derby. Each floor of the workplace tower in Good Job! provides you with four different levels, each with one solitary objective. You might have to drag cables across the workplace floor, bending them around corners and ensuring they stretch far enough to reach. Elsewhere, you might be moving steel crates around using a forklift, spreading the range of the Wi-Fi connection around the office or generating energy to power the area by making clever use of mirrors.

This may sound pretty ordinary, but your way of going about these jobs certainly isn’t. You’re scored on all these levels for the time taken, and also for the amount of damage you cause. It’s not immediately explained that you’re not actually supposed to just smash every valuable item you see, so score ratings on the earlier levels were pretty low to start, but after figuring out that the game does encourage you to be delicate, this all changes. So you have two approaches – use cables as slingshots and lay waste to everything that comes before you, or do things the civilised way. You can guess which is more fun.

Much like in The Stretchers, if you have a sibling/friend/spouse/stranger at arm’s reach, you can recruit them to help with your bidding here through co-op action. The missions aren’t changed at all between the single player and co-op experiences, though this is one of the rare games (not like The Stretchers) where playing co-op actually makes things easier than they would be on your own. The two of you picking up packages or working on clearing walkways really does give credence to the adage that many hands make light work.

It’s not all smooth-sailing, though. Smashing up too much stuff holds a good chance of getting you stuck in spots – and it’s clear Nintendo was aware of this, as the pause menu has an option to reset your character to the starting point. That doesn’t help in all stages, however, as particularly levels involving a forklift were full of awkward, takes-ages-to-correct situations with setting down crates in the wrong place. They certainly soured the enjoyment. Fortunately, only a handful of the game’s 35-or-so levels featured the forklift, but others involve moving around thirty items one-by-one, and those become repetitive to the point of being dull.

Good Job! bears the hallmarks of being an undeniably wacky Nintendo one-off game, though – it’s worthy of a place nestled inside your Switch.

Good Job! is another left-field Nintendo idea which offers fun and charming puzzling action. It’s not flawless, with some irritating controls and things having a tendency to find themselves stuck. But it’s certainly worth having.