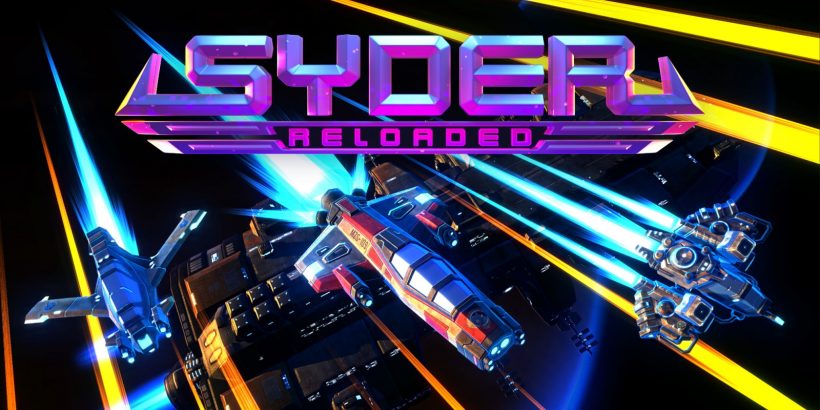 Outer space is a beautiful place. When your spacecraft in 2D scrolling shooter Syder Reloaded is surrounded by an onslaught of vibrantly coloured laser blasts and bullets from the enemies approaching you, the view is a sight to behold from the comfort of your cockpit. Except of course those lasers and bullets are quite deadly, and there are so many of them in this game.

In fact, there are moments when you could be forgiven for thinking that you are experiencing the video game equivalent of the Where’s Wally books, as you try to spot your own avatar amongst the kaleidoscope of bullet-hell action. There is no doubt that you are up against it in this game, but it’s a visual delight.

Syder Reloaded takes its inspiration from several generations of 2D space shooters, to the extent that the menu screen offers a selection of retro filters to tweak the graphics to your preferential style. You can swap the rather delicious modern look for a style that pays homage to the ZX Spectrum, the Apple II or Amiga HAM, amongst many others. Most of them make it trickier to focus on what’s happening on-screen, but nevertheless it’s a nice touch.

Aside from a basic Training mode, the game offers the choice of Survival and Campaign. Survival mode challenges you to last as long as possible, against the odds. Campaign provides a small number of set missions with various objectives, including the protection of a command ship as it navigates an asteroid filed, and another mission in which a damaged cruiser ship must be protected while it awaits aid. All the while, your radar at the top of the screen pings with red dots indicating the approach of enemy ships from both directions. Blasting the opposition results in some satisfying explosions and punchy audio effects; although many of the attacking craft take several shots to fall, it’s worth the wait.

Upgrades are available when you destroy certain enemy ships – including a side shot, rear shot, and homing missiles – and there are also repair modules and shields to collect. Your space craft’s health is represented by an energy bar that depletes with each hit, and an additional indicator keeps track of your Hyper Beam. When the bar is filled, you can unleash an extra blast of energy to help carve a path through the opposition.

Syder Reloaded is a gorgeous game to look at. The sprites are imaginatively designed and individually distinctive in action, and the background vistas set the scene commendably. Even the space craft selection screen is a joy to experience: as you choose from the available craft (more unlock as you play), the camera pans from ship to ship amongst the fleet. It’s a refreshing alternative to clicking an option on a static menu screen. Each vehicle also has its own stats and specific weapons, and so trial and error will help identify the one that most fits the player like a glove.

It’s a genre that is generously overflowing with potential rides, but Syder Reloaded manages to find itself in a strong position for consideration of your time. It’s not an easy ride if you opt for the harder difficulty settings, and there are many bullets to weave between in this galactic shooter. Perhaps the Campaign mode could have been a little more generous in its size, but the content on offer is a fun intergalactic ride.

Syder Reloaded is a polished and accessible 2D shooter with a satisfying punch to its plasmas. The inclusion of nineteen retro graphic filters is a clear indication that Studio Evil is attempting to charm gamers new and old.