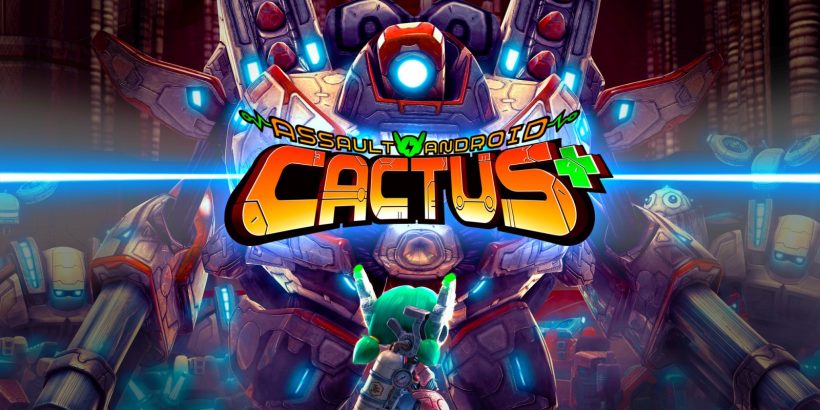 There are a lot of space and robot/android shooters out on the Switch, with three years having passed since the console’s launch.

As a result, games have to be pretty special to stand out amongst the saturated market. Assault Android Cactus+ first saw a release on the Switch eShop in March 2019, but recently got the physical treatment from Super Rare Games. It has you playing as Junior Constable Cactus, who responds to a distress call and finds herself faced with an onslaught of enemies of different shapes, sizes and characteristics, which must be gunned down to secure Cactus’s safety.

At its most basic, this is a twin-stick shooter where you have to strafe, duck and dive your way around enemy fire while eliminating everything in sight in order to complete each stage. Cactus has one main weapon which can be fired continuously, and hitting ZL allows her to switch to a secondary, considerably more powerful flamethrower. The stronger weapon must be used sparingly to avoid overheating, and comes in particularly useful when battling boss enemies, which make their appearance at the end of each of the game’s groups of stages. Several other androids are unlocked throughout the game, offering different styles of combat and their own unique weapons.

While the gameplay is basic, being successful involves a steady hand, great resolve and a ton of swears. Make no mistake about it: Assault Android Cactus+ is tough. There’s a heavy helping of bullet hell going on here, with loads of enemies on the screen at once. Enemies come at you in very rapid waves, and you won’t even have to clear the area to get more on the scene. The variation of enemies is good, with smaller pests being dispatched of simply by getting in the way of your bullet fire, and enormous ones taking a bunch of punishment before they’re eventually put away. More often than not, levels are set in enclosed areas where the action is compact, without much freedom to move around. However, levels eventually start becoming more complicated through things like conveyor belts and altering battlefields.

The difference from traditional space shooters is that this is a time-sensitive affair. Rather than health, the androids have a battery which is constantly depleting. Taking out a set number of enemies will result in a battery boost appearing, but you need to make it across the battlefield to it in order to collect it, which can be agonising and frustrating when you just fail to make it in time. Boss battles work with segmented health bars, and a battery boost is awarded for each segment. Further power-ups are dropped which can improve your firing power, up your speed, or freeze enemies to make them easy pickings. There’s a tactical element in when to collect them when they drop, though – they will rotate through the possible power-up options until they are collected, so if you want high firepower, you might have to wait a few moments before going to grab it.

While not long – the game has 25 stages, including boss battles – and it’s moreish while it lasts. Further modes – Boss Rush, Infinity Drive and Daily Drive – add more to the game’s lifespan, while leaderboards and local co-op for up to four players make this a standout option. If it had more personality through a longer campaign and less terrifyingly-designed characters, Assault Android Cactus+ would be even more special.

Assault Android Cactus+ is a tough but moreish space-set shooter. Infuriatingly difficult in places, it sure does feel satisfying to polish off the later bosses in particular. It left me wanting more, and provided the good kind of ‘game rage’.