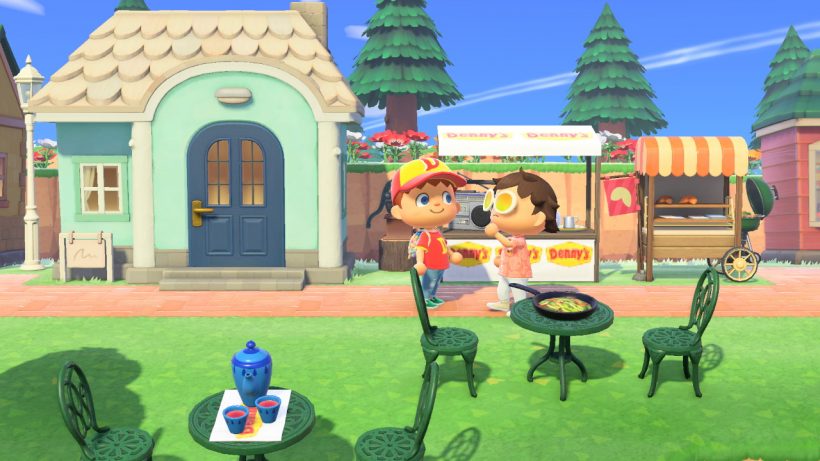 Fans of pancakes, burgers and Slamwiches who are missing their fix could now have the next-best thing: a Denny’s on their Animal Crossing: New Horizons island.

The American diner, which has UK locations in Swansea and Glasgow, is visiting players’ islands and giving out codes for in-game items to islands they approve, in order to establish a legitimate chain of Denny’s restaurants in the game.

With creativity strongly encouraged in New Horizons, players have designed a whole host of cafes, restaurants and bars in the game. Now, Denny’s appears to be the first major outlet to run with it.

“With COVID-19 keeping everyone indoors, gaming conversation on Twitter is up by 75%,” a Denny’s representative said.

“Denny’s, whose 2020 brand mission is to bring people together, wanted to do so in a new way – a way that would talk to its fans where they were playing and connecting with each other. New people were finding a love for gaming, and Denny’s just wanted to be right there with them, playing games with its fans and friends.

“Fast-forward to Animal Crossing EP+Co, Denny’s Agency of Record, saw that there’s a huge crossover with Denny’s social audience and the game; a game that allows people to role-play and make believe. Denny’s saw that fans were already creating their own “Denny’s” in Animal Crossing, using the props and décor provided. So, we decided to approve these make believe locations and create a network of digital Denny’s chains and franchise owners.”

Have you created any restaurants in your game? Get in touch with Denny’s on Twitter.

Ever wanted to own a Denny's franchise? Good news! We're now offering exciting new opportunities in the digital world of Animal Crossing. DM us for details… pic.twitter.com/i8L5VJ3P1X

Make sure you subscribe to Switch Player Magazine on Patreon! Issue 40 sees the team count down their top 40 Nintendo Switch games.