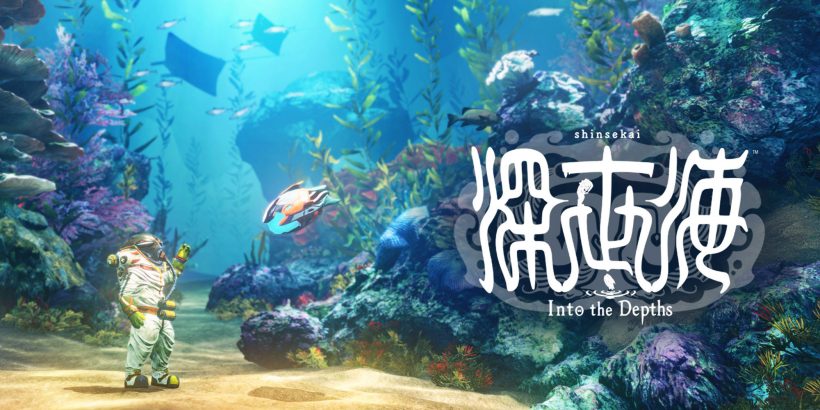 Originally an Apple Arcade exclusive title from Capcom, turning heads in the mobile space as one of the more extensive and, *ahem*, in-depth titles available in that lineup, Shinsekai: Into the Depths came to the Switch eShop at the end of March as part of the month’s Nintendo Direct Mini. It’s an interesting, alternative take on the Metroidvania formula, with an atmospheric vibe that captures the feeling of being deep underwater, not just in its ambience but also in its gameplay.

Get it? In-depth? Because of water? Pardon me, I’m a bit of a drip.

Fresh and different from the average apocalypse story, Into the Depths starts you as a lone survivor not burrowed in some fallout shelter somewhere, or in an abandoned cityscape, but rather deep below sea level. The game’s mysterious narrative throughline and motivations match the wonderment and uncertainty of the deep blue, spurring you on to delve deeper and find out more.

Remnants of a forgotten society, not unlike ours, are uncovered throughout, and an achievement system including from the start encourages you to push on alone and build a future for this lowly explorer. With headphones equipped and lights turned out, you’ll strangely feel a connection with the character, wanting to help them to safety, and to a situation better than what they’re currently in. It won’t necessarily be an easy journey, however, as there are plenty of obstacles and sea creatures to overcome (or avoid completely), and the game’s easy and standard difficulty modes perhaps warn you of the dangers of the deep when you begin.

With laboured movements, harpoons to fight off foes, and jet propulsion to help you traverse the water more freely,  this isn’t your average Metroidvania; zooming out of the map at the start truly makes you feel like a drop in the ocean. There are different specific areas to explore, each with secrets to uncover, treasure to collect, and materials that you can harness to help you upgrade your equipment and delve even deeper.

After a while, you’ll discover a small drone friend, who can help you collect materials and fauna in order to make your suit more resilient to pressure as you descend. You’ll certainly be needing this if you want to find out what’s at the bottom of this ocean. Other factors that you’ll need to keep on top of are your oxygen tanks, which can be found scattered throughout. These allow you to propel yourself, and can get damaged if you fall too quickly.

The Submarine – introduced at the end of the first part of the game – serves as a way of quickly traversing the vast depths of Shinsekai, allowing you to excavate new pathways using the built-in drill, and fast-travelling between points of interest. You can tether yourself too when you need to jump out, and it only adds to the sense of scope the game creates, making you feel even smaller within the vast blue expanse. It’s a cool addition, and resembles something out of Gerry Anderson’s Stingray, so you can’t go wrong.

The game’s textures at times can be a little muddy, but the setting and overall mood make up for it. The atmosphere that flows throughout is engrossing, and it’s nice to look at for the most part, so this portable-focused title (again only on Apple Arcade and Switch currently) can be forgiven if its visuals feel a little washed-out at times.

A different take on the Metroidvania formula,  Shinsekai: Into the Depths creates a suitably aquatic feel, both in its atmosphere and gameplay. At times visuals can look a little washed up, but if you fancy going below sea level, then it’s worth taking the plunge.