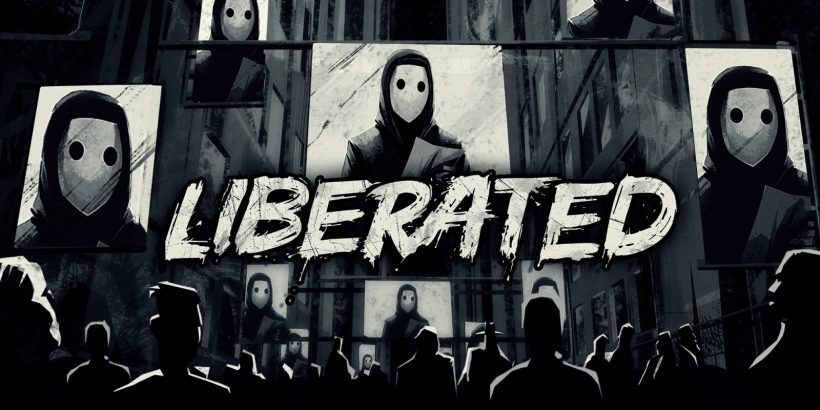 ‘Welcome to a brave new world.’ Or so it says…

Set in the near future in 2024, Liberated immerses players into a world of chaos and dismay. Due to a tragic high school bombing, the government have pretty much gone into ‘high alert’ and set in place a system that monitors everyone and everything. Imagine a world where every camera, every piece of social media is observed – if you’re not complying with every little rule set in place the police will come knocking down your door. This is the world of Liberated and this is the case with Barry, the first character we take control of.

The story of Liberated is set out across four comic book issues, each of them featuring various characters to control with each one blending into the others in some shape or form throughout. What’s more, each character is on a mission to stop this government, no matter the cost. The story itself seemed to start strong but tends to trail off the further I got through it, which was a shame.

The noir comic book aesthetic is a nice touch, and it’s one that makes a nice change from the majority of side-scrollers released now. At the start of the game, you will experience very little gameplay and a lot of narrative – which wasn’t a problem. The camera pans through each panel individually, allowing it to play out as it should, sound effects and all. It’s only after the first 30 minutes or so that the gameplay ignites.

The gameplay itself works well and is fun. Walking – or running – through a ‘rain-soaked’ city shooting enemies, hiding and stealth killing with the occasional quick-time event is what you can expect for the majority of it. The controls are simple, yet effective. Moving the RS aims your weapon with using ZR to fire, A is to crouch for the more stealthy approach and pressing X behind an enemy stealth kills them. Let me tell you, there is nothing more satisfying than having that ‘HEADSHOT’ wording pop up after shooting at an enemy. Liberated does seem to want the player to take a more stealthy approach to the combat, with various hiding places and being able to sneak; however, with unlimited ammo and not much in terms of punishment for dying, there just isn’t much point.

I felt as though the quick-time events were only included to help break up the gameplay from the side-scroller and visual novel elements, and due to this, as cool as they are, they seem a little unnecessary. Not to mention that they have an unreliable difficulty. One time they can be really easy, with plenty of time to press each button, and at other times it almost seems impossible to press the button within the allotted time.

In my experience, Liberated is best played whilst wearing headphones. I found it incredibly soothing and satisfying listening to the sounds of the rain pouring down even during the unprecedented times ahead. The soundtrack itself builds suspense and sets the tone of the story very well, making for a very pleasant experience.

Sadly, I encountered many bugs and glitches throughout my playthrough, which dampened the experience (pardon the pun). The character freezing at random intervals and shots not being registered as hitting an enemy are just a few that became very frustrating. The frame-rate also drops noticeably low at times, which can be disorientating.

Liberated is a game with a story more relevant now than ever, and an intriguing comic-book style aesthetic, it’s just a shame that this version comes with way too many bugs and frame-rate issues.