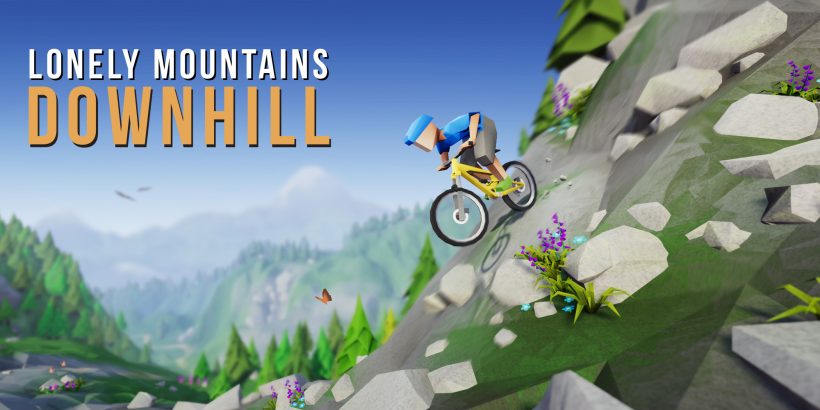 Lonely Mountains: Downhill is one of the best extreme sports video games in quite some time. It’s far from perfect, for reasons divulged later in this review, but the opportunity to manoeuvre through tight turns and over vast, unspoilt scenery is a personal highlight of 2020 so far.

From the beautiful simplicity of the polygonal graphics to the detailed environments that you are left to traverse, there is every reason to don your crash helmet and start peddling. When you do, the sense of speed and control makes for an addictive and enthralling racer that commits wholeheartedly to its vision: ride along quiet mountain lakes, majestic forests, and steep canyons in any way you wish. That’s the real beauty here. You can race downhill as quickly as possible to set the fastest lap or take a much more leisurely approach and just enjoy the sights and sounds.

A good thing too because there are so many sights and sounds to enjoy. The visuals are stunning, with a sense of depth that is only achieved through effective use of both the foreground and background. Objects and track routes outside of your vision are blurred and come into focus in a similar style to that of Octopath Traveller. As well as this, there are trees and the like which are situated at the front of the screen and create additional depth. For the most part, this works exceptionally well. There is the odd moment of frustration as your vision is restricted and a tense run is halted, but these occasions are few and far between.

On the note of the soundtrack, or lack of, this is yet another example of fine video game design. Whilst a set of melancholic piano instrumentals would have done the game justice, the peace and tranquillity associated with the sounds of nature are the pièce de résistance of Lonely Mountains: Downhill. The developers want and encourage you to appreciate it too. You can unlock every track without the need to race as quickly as you can. In most instances, you just need to avoid crashing a significant number of times to progress. It’s the perfect balance between speed and grace which makes this game so enjoyable.

For the speed freaks among us, the game delivers too. Each track has a number of objectives, starting with the completion of the course before then providing rather challenging trial times for you to beat. Doing so ultimately leads to new bikes and clothing options but doesn’t stunt the progress of others who would rather take it slow. Whatever your preference, the riding physics are there to be marvelled as you feel the impact of every twist, turn, and burst of acceleration.

Unfortunately, it isn’t all speed, style, and grace though. Frame-rate and texture pop-in disrupt an otherwise tranquil and serene journey from start to campsite finish. The performance issues can prove rather significant, and it definitely detracts from the overall experience. This proves to be quite disappointing, as Lonely Mountains: Downhill is reliant on smooth and slick gameplay to keep players fully immersed in it.

Clever course design, a subtle soundtrack, optional objectives, and almost picture-perfect polygonal visuals ensure that Lonely Mountains: Downhill has enough charm and challenge to forgive its failings on the Nintendo Switch. If a performance patch was forthcoming, we could well be looking at one of the best indie titles on the console to date.

Lonely Mountains: Downhill has so much going for it that you can’t help but love it. Vibrant, varied, and victorious. It’s an outstanding example of indie development and a delight from start to finish – performance issues aside.