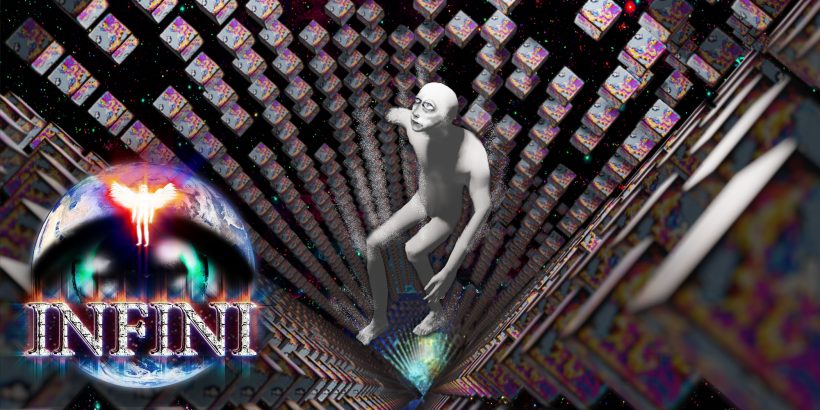 I’m rarely one to turn down an experimental indie game; after all, some of my most treasured gaming experiences have been those which have tried to challenge the status quo in some unique way. Infini is certainly experimental, as its abstract narrative and unconventional graphics will demonstrate, but the experience doesn’t really land in the way one might have wanted.

Infini is the story of Hope, a personified idea which gets trapped in the endless, confusing void of Infinity after getting tricked by War. The story follows Hope as they search all the reaches of Infinity looking for some way to escape, meeting along the way various other personified concepts such as Memory, Poetry, Technology, and Time.

While the characters embody aspects of their names – War is a villain; Time is all-seeing – everything else about the game is unconventional in some regard. The story is incredibly abstract, the art lies on the far end of the conventional-to-unorthodox spectrum, and the gameplay mechanics themselves are quite unusual. This lends the game a distinctively alternative feeling, but not always to its credit; the abstract story especially falls into the same trap that a number of narrative-driven puzzlers do, in that by alternating the story with long, challenging puzzle sections, it can be hard to pick up the narrative threads between the puzzles – particularly when the threads themselves are so offbeat. Similarly, while the art design is interesting, it’s a bit unnerving, and this feeling is echoed by awkward, stilted dialogue and discordant music. It’s not an aesthetic I’m personally fond of (and I suspect this may be felt across the board), but it does nevertheless contribute to the game’s eccentric atmosphere.

The gameplay, however, is where Infini shows somewhat more promise. The ability to fall off one edge of the screen and appear on the opposite, otherwise known as wraparound, forms the basis of the game’s many levels; once you introduce new features such as the ability to manipulate your zoom level, you’re truly in for some mind-bending gameplay that challenges you to think outside the screen. Some of the puzzles are devilishly hard, and certain levels require the most precise of movements in order to avoid the obstacles that will kill you in one hit. This isn’t a problem for the most part, although the fact that your hitbox isn’t the same length as it is wide is frustrating when it means you can accidentally rotate yourself too close to an obstacle and die.

It’s also a shame not to see some sort of skip function implemented; progress is essentially linear, and the one time I was able to check out a chapter in advance, I nevertheless couldn’t proceed until I’d gone back and completed those I’d skipped (which does make me wonder why I was able to skip ahead at all). When you get stuck, the game can start feeling like drudgery, and it doesn’t bode well when finding solutions starts eliciting relief rather than delight. A few collision glitches also contributed to my frustration, although the developers have indicated that a patch is on the way to address that issue.

Fundamentally, while I can commend Infini for its ambitious challenge to the status quo and innovative mechanics, the game itself often feels less fun than it does frustrating. On this basis it’s hard to recommend unless you’re desperate for something eccentric and offbeat.

Infini is an ambitious, unconventional puzzler. Its unusual yet conceptually simple mechanics will get you thinking laterally, but the game’s steep difficulty and unnerving atmosphere combine to make the experience somewhat grating at times.