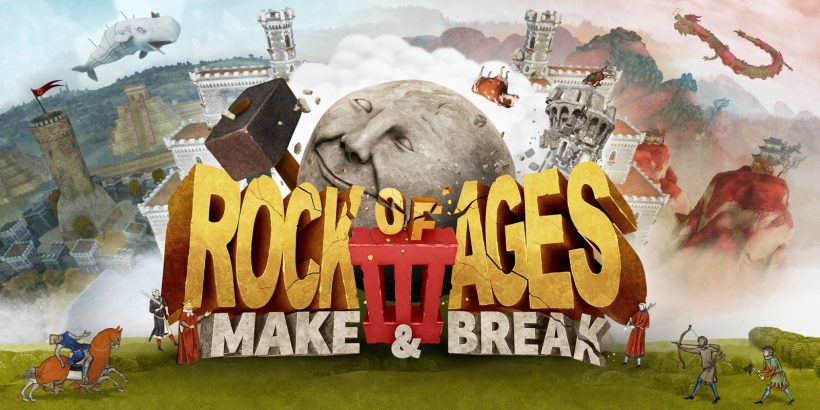 Games can be pretty good at delivering history lessons.

We’ve had a bunch of historical experiences on the Switch alone – Assassin’s Creed III took us back to the colonisation of North America; LA Noire had us playing as a detective in 1940s Los Angeles, and Wolfenstein II showed us an imagination of the 1960s if the Nazis had won the Second World War.

Rock of Ages 3: Make & Break does things a little differently. It’s a game which takes us through a whistle-stop tour of history’s greatest civilisations, via an activity which remained universally popular throughout all of them: rolling a ball down a hill, of course.

Variations of rocks hurtling down a hill laden with obstacles are what forms the core of everything you’ll see in action here. Levels will challenge players with a range of tasks, whether it be a time trial with a score recorded on an online leaderboard, a head-to-head race against another rock, or trying to sustain the minimal amount of damage and generate the maximum amount of force in a bit to demolish the doors of an enemy player’s castle at the foot of the course. Another option has you trying to smash easels to amass points before trying to land in differently-numbered holes for a multiplier at the end of the course in a head-to-head competition. Ultimately, every mode feels largely like the same experience.

While taking control of a ball as it canters downhill is by far the most enjoyable aspect of Rock of Ages 3, a significant percentage of the game is a tower defence, as you set up the obstacles for either the computer or other players in order to keep your castle intact from their onslaught. Avalanche mode will see waves of numerous rocks fall down the course, and you’ll need to have set up your defences astutely in order to sap their health bar before they manage to reach the end of the route.

There’s a whole host of wacky obstacles which you can place in your opponents’ path, from a Trojan Horse, to a herd of stick cows which attach themselves to incoming rocks and halt their momentum, to a Leonardo da Vinci-designed fighting machine which fires laser beams at the rocks that pass it. Yes, this is a game full of the wackiest of ideas, and even features cutscenes in the Story Mode with the humour to match. Expect to see Ancient Romans and Greeks, the Indian Empire and the Mongol Empire, as well as a particularly weird theme choice based around the yodellers of the Swiss Alps.

Fancy making your own levels? This time, you can – it’s the ‘Make’ part of the titular ‘Make or Break’. You can set up a course as you see fit – add turns, width and slope in order to create the meanest of challenges for others before uploading your creations online. The online experience doesn’t appear to be seamless, however – for the time trials, I had no problem hitting the top position on the leaderboard, but on closing and returning to the game later, the online leaderboard seemed to display no acknowledgement that I had done so.

Rock of Ages 3 is fun and amusing, and a good option for fans of Super Monkey Ball in particular. However, playing lots of levels in succession is a bit of a chore – levels all feel alike but for the themed setting. The rolling is better than the tower defence part, but it’s worth a look.

Rock of Ages 3 is great fun during the rolling bits, and not so much when designing your own courses – those sections are spent longing for the rolling to begin. The worlds are varied and wacky, but things can get a bit samey when played for too long.