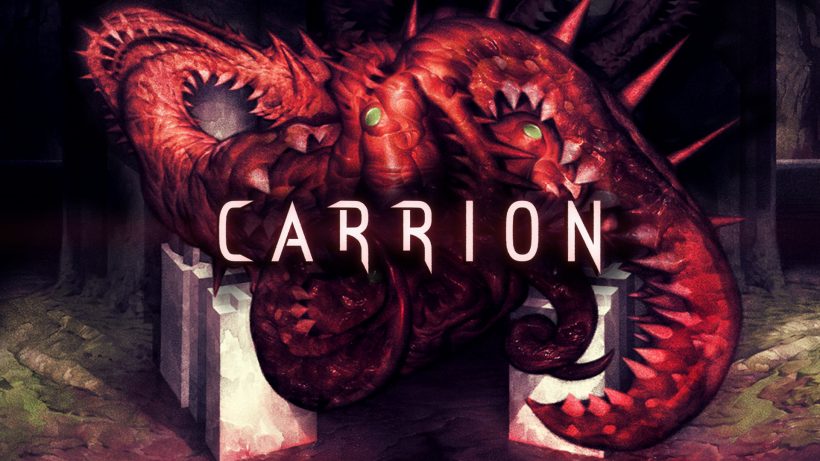 Carrion is a pixelated, single-player, 2D Metroidvania, reverse survival horror game. You step into the squishy tentacle-shoes of an insatiable, many-mouthed-monster who has escaped its containment unit and is ready for ALL THE FREEDOM! Carrion (as I will now also name our beloved monster) is also ready for tasty, squishy snacks in the form of ALL THE HUMANS! Yum yum! As Carrion, you will satisfyingly slip, slide and slosh your way around a complex maze of maps in order to spread your biomass throughout the entirety of the facility.

Like the Metroidvania games we know and love, you’ll discover powerups and abilities that will allow you not only to get bigger and stronger, but also to reach previously inaccessible areas as you explore and progress. Using the right joystick to move, you are unfettered as Carrion’s many tentacles allow you to zip up, down, and all around. Traverse vertical tunnels with ease (no screw attack upgrades required), and cling to the roofs of levels right from the get-go.

The game is easy to pick up, and your possible actions are displayed on-screen at all times. The controls are smooth and responsive, and the way Carrion moves around feels slick and satisfying. Carrion’s many tentacles lashing about, grabbing on to your squishy human snacks and dropping them into your maw, or grabbing the mechanical turret-drones and slamming them around until they break, feels marvellous.

Things your little monster can do are triggered by the ZL, L, X, and R buttons, and they’ll change as you collect various powerups or grow/shrink in size. For example, right off the top, you can press ZL to roar; roaring will not only alert (and spook) nearby humans, but it will also send return roars to guide you in the direction of the save points, or ‘biomass holes’, to give them their technical name.

There are always multiple ways to make it through each area: you can use your prehensile tentacle to grab baddies, sneak or slam your way through rooms, or use the parasitism technique – taking over a human host and getting them to do your dirty work. The choice is yours, and each one is entertaining. For not having any dialogue, the game also boasts a surprisingly engaging story. Periodically, Carrion will squeeze itself into a special hole that shifts your perspective to a human, and for a few brief scenes, you’ll walk around as this researcher exploring and investigating. The story is quite indirect, so it’s up to you to fill in the blanks.

The pixel-art aesthetics of this game really lend themselves to the overall atmosphere and feel. Carrion’s various shades of red drip and slosh, leaving a bloody trail wherever you scuttle. It’s gratifying when you enter a room, and after ingesting all humans, the area is covered in dripping spots of blood and gore. Even the tiny humans are constructed in such a way where despite lacking all facial features, you can still tell when their sprites are wetting themselves from fear.

The animated lighting design for the game is amazing; the way the containment units glow with soft light, the tiny lines and graphs on the research computers, the fact that a lightbulb hanging from a cord can be delicately pulled with your prehensile-tentacle and then RIPPED FROM THE ROOF, bathing the room in darkness. That last detail in particular forms the perfect way to sneak up on and devour pesky homosapiens. The music is lovely, but the sound effects are where the audio shines. The sloshing and slurping sounds as Carrion crawls, the sound of metal breaking as you force open vents (or break doors and drones), and of course, the pathetic whimpers and screams of Carrion’s multitude of snacks.

The horror elements in Carrion are flipped on their head – YOU are controlling and instilling the fear. You’re the hunter, rather than the hunted. Even when the pathetic humans tried to light me on fire, I wasn’t afraid. In fact, once I had dipped my biomass in some water, I only felt rage at the audacity of humanity; it merely increased my desire to destroy all humans!

Carrion is a wonderful experience. It has awesome sounds, graphics, controls, and a story that gets you thinking. The game is reasonably priced, so if you’re a fan of the genre it should be in your library already, and if you’re not a fan, it could make you one. In fact, my only complaint is that the game is too short, and I never wanted it to end. If holding an actual copy of a game is your jam, you should know that Carrion is also getting a physical release from Special Reserve Games and Limited Run Games. You can slip, slide, and then lend it to all your friends.

You won’t understand just how much you need a pixelated tentacle monster in your life until you play Carrion. The smooth controls, stellar soundtrack, and slick graphics will provide several hours of top-notch entertainment.