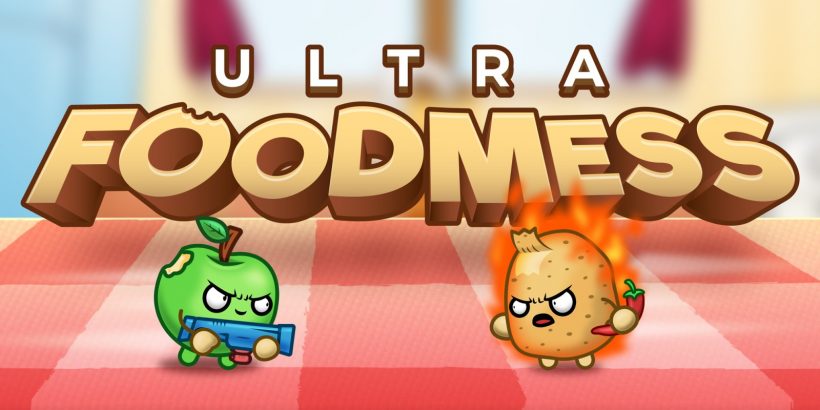 If you have ever been told not to play with your food, this is your chance to defy that instruction and play to your heart’s content. The theme of this party game is most definitely food. The playable characters are food items and the mini games all have food puns in their titles. Some of the puns are rather good too.

From the perspective of a shopper browsing the Nintendo eShop, Ultra Foodmess is unfortunately bestowed with a rather clunky title. If it is meant to be a pun, I don’t get it. But look beyond the title and this is a rather simple but effective party game for up to four players, with the option of bots to fill any gaps in the line-up.

Each mini game is viewed from above on a single screen resembling the surface of a chequered tablecloth. After each player has picked an avatar (Sandy the Sandwich, Tom the Tomato, Barry the er… Strawberry) the characters are dropped into the game, and the first player to win a chosen number of rounds wins. Players can either opt to play mini games chosen at random from the pool of eleven available or pick specifically from the selection. All the potential mini games are unlocked from the start, and so if there are modes that you enjoy more, these can be chosen right away.

Things soon get messy, and table manners are out the door. “Ketchin’ Up” places a slowly spinning bottle of ketchup on the table, spraying a deadly arc of red sauce for the players to avoid for as long as possible. “Organic Disposal” features deadly saws to the left of the screen, and various food items (significantly larger than the characters under player control) begin sweeping across the screen from the right; the trick being to avoid being nudged towards the saws by the obstacles coming towards you. “Shot Dog” gives each player a gun that fires hot dogs (I told you some of the puns were good), and effectively becomes a food-based gun fight.

In most cases, the winner of a round is the last food standing. There are some exceptions: “Juice It Up” for example allows each player to leave a trail of colour across the table, with the winner being the one who has painted the most in sixty seconds. Yes, there is more than a hint of Splatoon in that particular recipe.

If it all sounds like simple playground fun so far, that is because, well, it is. The mini games are extremely easy to learn, and a burst of multiplayer laughter is near-instantaneous once the action begins. Visually, Ultra Foodmess is bright and efficient, and a jauntily inoffensive tune plays throughout the game.

My main criticism of this meal is that it is rather lean. While the eleven play modes on offer are – overall – good fun, you are going to experience more repetition than a game of Mario Party. Succeeding in Achievements adds more playable characters, but it will not take too long for the average player to gain these. There is no option for online play, although party games like are always best when played together in person.

It is evident that Ultra Foodmess has been cooked up with accessibility and quick-fix fun in mind. Each party game requires only the use of a Joy-Con thumb-stick with no additional buttons, and it is this ease of enjoyment that means anyone can tuck in.

Ultra Foodmess is a very accessible party game offering a limited amount of simple but addictive mini games to serve up laughs for up to four players. At this price, it is a dish worth tasting.