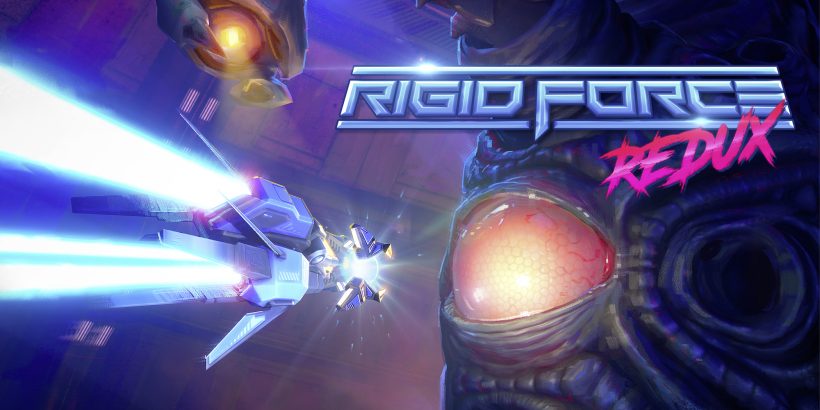 I have come to the conclusion that flying through outer space is just too dangerous to warrant the sightseeing, unless your ship is heavily armed. The good news with Rigid Force Redux is that your spacecraft has plenty of firepower, with the meatiest armament of weapons since R-Type.

The game is a remake of Rigid Force Alpha, a 2018 PC release. The influence of early arcade shooters is evident, with dazzling visuals to bring the genre bang up to date. Waves of enemy craft are ready to be carved up by your arsenal of ammo, and practically every button on your right Joy-Con fires a weapon of some sort.

Using the L and R triggers, your bullets can be redirected to fire wide or narrowly focused, or alternatively spread out behind you (essential when enemies flood the screen in both directions). It’s an extremely satisfying control mechanic to use, with the ability to redirect shots fluidly where required. Pressing Y exhales a powerful burst of fire, and each enemy destroyed drops little blue energy orbs which can be pulled towards you using Attract mode (holding down ZR). These orbs are crucial to powering some of your weapons.

The developers com8com1 have done everything they can to make the game accessible for players of all experience levels. There’s a tutorial to demonstrate the basics of the different weapons available, and three difficulty levels allow you to find the right challenge. Play on Easy for example, and you will have the opportunity to grab any power-ups that you’ve collected when you lose a life, rather than saying goodbye to the precious upgrades you have amassed.

Your spacecraft is designed for interstellar and planetary combat operations, which allows for a rich variety of locations throughout the six levels of the game. An experienced pilot may complete them in a relatively short space of time, but the diversity of scenarios and enemy types make it a journey worth taking. Besides the panorama of open space, subsequent levels take you through the chambers of a large spacecraft, across a desert world, and into the depths of a cave.

Alongside the Main Mission mode, an Arcade mode encourages additional challenges such as increasing your score multiplier, rescuing astronauts left floating helplessly, and destroying orb canisters. A Boss Rush mode also unlocks later. Although there are only six levels in the game, the design is such that those levels are explored to their full potential. There are even in-game trophies to acquire.

The visuals are dazzling, with colourful laser blasts, epic explosions and enemy craft that are rich in their diverse appearance. Opponents small and large are hurled in your direction, with some impressive scaling effects and masterful perspectives to add dynamism to the 2.5D plane. There’s a satisfying assortment of sound effects representing your different weapons and a pulsing synthwave soundtrack. You have an AI companion named Psye imparting useful information throughout; she is pitched at just the right tone, with conviction rather than cliché. These attributes combine to form a polished, attractive shooter that works effectively, docked or in handheld mode.

The Switch has a generous fleet of side-scrolling space shooters available, but Rigid Force Redux is towards the top of the pile. It offers a polished arcade experience that not only appeals for the temptation to chase a high score, but also to see what the next level has to offer.

Rigid Force Redux is a charming addition to the side-scrolling shooter genre. The journey may be over too soon, but it’s very scenic and worth it for those weapons. Strap yourself in — you’ll have a blast!