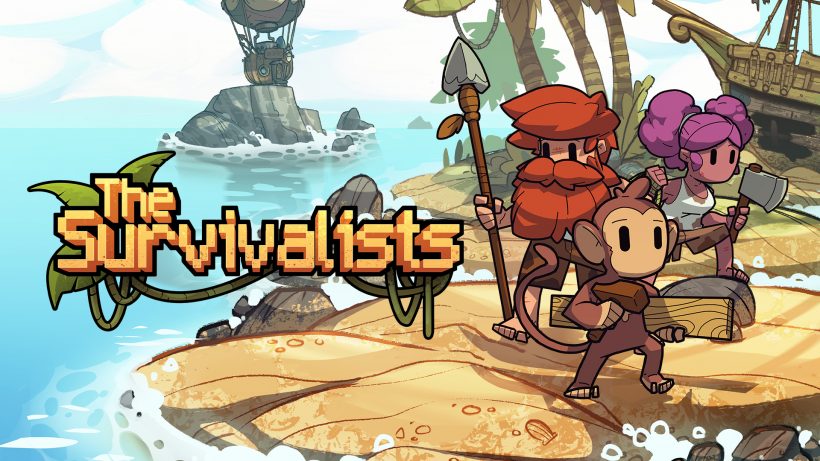 Nobody ever said “If you want a job doing, forget about doing it yourself, enlist a bunch of mischievous monkeys to do it for you”. Still, it seems that proverbs offer neither sound management advice, nor blueprints for good game design, so here we find ourselves in the world of The Survivalists, attempting to herd monkeys for fun and profit.

All the familiar elements of the genre are present, including most of what you’d want from a survival management sim: wood-chopping, fire-building, crafting, eating, sleeping, the whole shebang. The setting has you shipwrecked on an island, and it soon becomes apparent that more islands lie nearby, ripe for exploring once you build a raft.

It’s good that the creators have kept the framework utterly familiar — if not downright derivative — because when they mix it up, they really go to town, with a monkey-based mechanic that turns everything on its head. As you meet and befriend monkeys wandering the landscape, they can then be put to work carrying out all the tasks you’re too lazy or important to deal with yourself. Outsourcing involves calling a monkey to attention, then performing whatever action you want it to copy, then handing over any tool it might require. With a lot of practice, you’ll have a squad of monkey mimics tearing around basecamp, working in a harmonious and highly satisfying production line.

Unfortunately, it’s rarely as simple as it should be. Changing a monkey’s role requires re-training it each time, and selecting individual apes isn’t always easy, even though you can customise their colours in whatever way might help. With a controller, things can get pretty awkward — especially in a hurry — and on too many occasions it’s just easier to do the hard work yourself rather than taking the time to set everything up.

Aside from some confusing icons representing simian specialities, the graphics are functional, decidedly cute, and attractively pixelated. Some of the hostile creatures and terrains are a bit rough around the edges, but the music picks up when you set sail, and the customisation and crafting options provide a good set of tools for base-builders and lovers of sandbox games to find plenty of enjoyment.

There’s less immediate peril in The Survivalists than in a title such as Don’t Starve — although you can ‘die’, you’ll just respawn with barely a penalty. This is beneficial when you’re getting to grips with the game in its early stages, because fierce creatures are out to get you and there’s a regular threat of goblin raids on your base. However, it doesn’t take much to build a defence for these — either with a small monkey army, or spike traps. Combat doesn’t offer much in the way of difficulty either.

Multiplayer is an enjoyable affair, with yet more layers of depth offered by the various settings to control the action. The defaults have guests unable to open the host’s chests, which renders them pretty useless, but that option can be changed if you hunt around a bit.

This sums up The Survivalists for me: there’s plenty to it, but possibly too much, and you really have to go looking for it. If you can persevere, this is the kind of game that can provide endless hours of addictive entertainment, but the early game is a struggle and will certainly put off some less committed players. There’s a quality of life patch in the works and a future update promises farming, animal taming, and extra items — this will no doubt add polish to a stable, if occasionally clumsy, base game.

The Survivalists is a classic endurance adventure with tried and tested elements, accompanied by a defining mechanic that, sadly, could be better implemented. But it’s still great fun and fans of management sandbox games are well catered for.