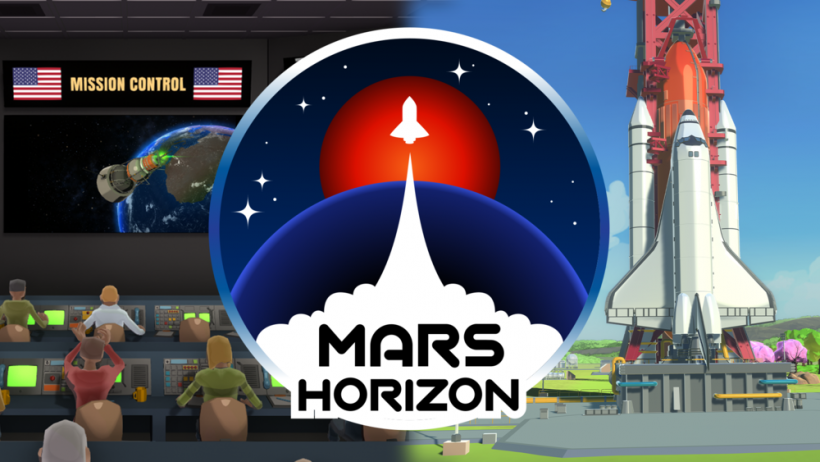 Let’s enter the space race with this strategy simulator from Auroch Digital. If you are a space nut and want to take your place in the history of galactic exploration, you have reached the right destination with Mars Horizon. Authenticity is the order of the day and the European Space Agency (ESA) supported the development of this game, so don your helmet, grab your space suit and head out on your mission to Mars!

In Mars Horizon you can build your own space agency, and your success is all dependent on the choices that you make. You are in control of absolutely everything, from setting up your base to launching rockets into space. The initial tutorial can be turned on or off, but I found it useful as an aid to getting started and gaining a feel for where everything is located.

You have a control panel to the left of the screen where you can check on any missions you have in progress, as well as the progress of your competitors such as the Russians, Americans, and Chinese. Your first task is to build your base, but you shouldn’t just dump your launchpad anywhere. You must think about which buildings go well together. For example, having the PR building near the launchpad makes little sense but having the rocket testing facility nearby does, and getting these things right will earn you additional funding for research.

There are three main areas of research: Buildings, Vehicles and Missions. Each area is set out in a tree formation and you move down the tree as you complete each task. Everything you do is turn-based which allows you time to check your decisions before moving on. Whilst this reduces the chance of errors it does, at times, also feel a little like you are having your hand held a little too much.

You can move time forward month by month by using the X button which is a handy little trick to know and it keeps the game rolling forward at a decent pace rather than waiting ages for your research to be completed.

Although the competitive side of me wanted to complete everything before other Countries’ space agencies did, diplomacy can be useful too. Not that I want to encourage getting in bed with the Russians of course, but entering into partnerships for missions earns extra funding, and it is an element of the game that demonstrates risk and reward. You can chance going it alone throughout, but that occasional partnership can help progress your research quicker.

The game’s biggest strength lies in its accessibility, with the user interface being well designed without trying to be too clever. There is no need to be a science boffin to understand what you need to do to get your rocket into space.

There is a cool educational element too, and as you complete research, this gets added to a ‘Spacepedia’ where historical exploration and your own story nicely intertwine.

There is little to highlight when it comes to sound; just a melancholy background tune and the occasional response sound to pressing a button. I didn’t find that this detracted from the gameplay at all, however. Graphically, the solar system is simple and clean and one enjoyable aspect is that you can see the other agencies’ satellites moving around planets and across the Universe in front of your very eyes.

Space and strategy fans will really enjoy this game, but where it falls down is in its lack of replay value. Some of the missions can feel disappointingly repetitive, but this shouldn’t discourage strategy and space exploration fans from reaching for the stars with Mars Horizon.

Mars Horizon is a simple yet addictive strategy sim that takes you to the very heart of space exploration itself. Take charge of your own space agency but be careful as one mistake can end in disaster!