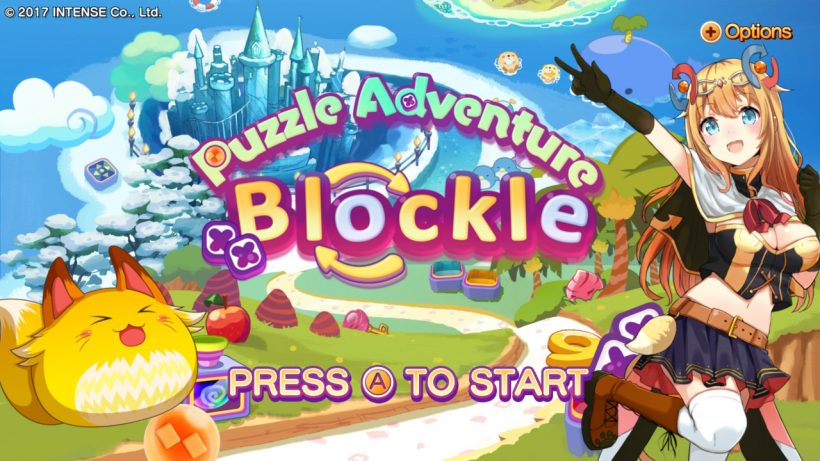 People enjoy video games for different reasons; some like to be able to escape from the real world by diving into a fantasy experience offering quests full of wonder and detail, while others like to pass the time by playing smaller, simple games such as puzzles to test and distract the mind. Puzzle Adventure Blockle is the latter (as you might expect), yet it uses up so much unnecessary energy trying to be the former at the same time. If you look past this fact however, some enjoyment can be found in the puzzles themselves. Let me explain further…

The game starts with a rather lengthy dialogue sequence, introducing main protagonist; Kulu – a “Kat” who resembles an adorable cross between Studio Ghibli’s Totoro and Chansey from the Pokémon series. We join Kulu as he meets up with the mayor, the authority figure explaining that he wishes to take over the world by any means necessary. He states that he needs Kulu to travel through various worlds to collect ‘World Stones’ for some reason, before demanding that he take a girl called Arika along for the ride too. Arika appears, wearing practically a flannel to cover her chest (which is zoomed in-on during her first cutscene for good measure). The mayor calls her a “goddess,” and it’s established that she has no recollection of how she got here or who she is. Right… 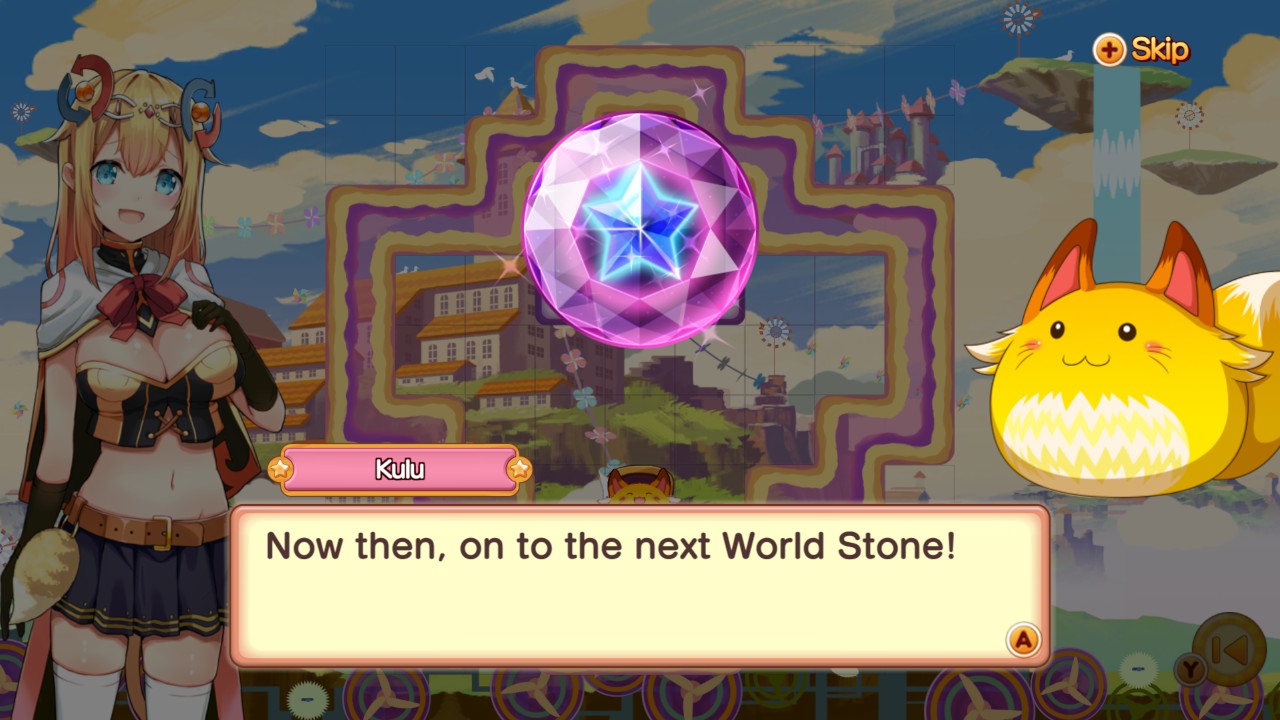 Even though both Kulu and Arika state that they don’t trust the mayor or his decisions, they decide to go along with his plans anyway, and set off to find the first World Stone. After what feels like several ages have passed, the action begins. That said, many levels are interspersed with this back and forth dialogue about the quest, the characters’ back stories (or lack thereof), and ramblings from new characters too. As you may be able to tell, the story is pretty pointless and gets in the way. The content of it is also horribly cringy at times, with an odd sexual tension between Akira and her cat companion that sometimes develops into actual, sexualised flirting. To me, it felt completely unnecessary, utterly bizarre, and hugely off-putting. Despite its colourful and cuddly artwork and appearance, the game is rated ‘Teen’ (with a 12 being given in the UK) which is perhaps worth noting for any parents who might have assumed it to be a more innocent title.

Luckily, there is an option to skip most of these dialogue sections, so let’s do the same here and move on to the actual gameplay on offer. To collect the World Stones, you travel through several worlds solving puzzles. Each world contains ten levels, and these worlds have their own individual themes. One has to be completed before you are allowed to move on to the next. The basic idea of each level is to get Kulu to the door; a simple enough idea in theory (and in reality in the early stages), but one that does get slightly tricky at times in the later worlds.

To get to the door you’ll need a combination of walking and stage-rotation – Kulu is able to walk across any flat surface and can jump up or down by one block, whilst Arika can use her special powers to rotate the stage (dropping Kulu to the floor in the process) by pressing [L] or [R]. Other controls come in to play in later levels too, introduced as the puzzles grow in their complexity. Eventually you’ll be using the right analogue stick to change between different objects to interact with, whilst a press of the (A) button will perform said interaction.

This growth of complexity is a consistent theme throughout – puzzles advancing at a satisfying rate, and a whole host of other objects and conditions being introduced as the game progresses. Soon you’ll be needing to collect a key before arriving at the door, dealing with things such as warps and spikes, and even working out how to manipulate the use of different block types (both static and movable). These blocks – as well as the environment itself occasionally – change even further depending on which theme your current world is based on. There are elemental blocks such as “shock blocks” and “ice blocks,” and locations such as ‘Icicle Palace’ which provide an icy floor to affect Kulu’s walking. It moves at a decent enough pace, so whilst the basic structure and goal of each puzzle is identical, it just about survives by not being too repetitive.

Completing each world will present you with one of the World Stones, as well as unlocking the next world to play through. The early puzzles can be completed within a few seconds, with the later (harder) ones naturally taking quite a while longer to work out. To add a bit of longevity, each level has three optional requirements to meet. If met successfully, a crown will be provided to you for that level – and if you so wish you can also backtrack to any level you have previously played to try to obtain all crowns. 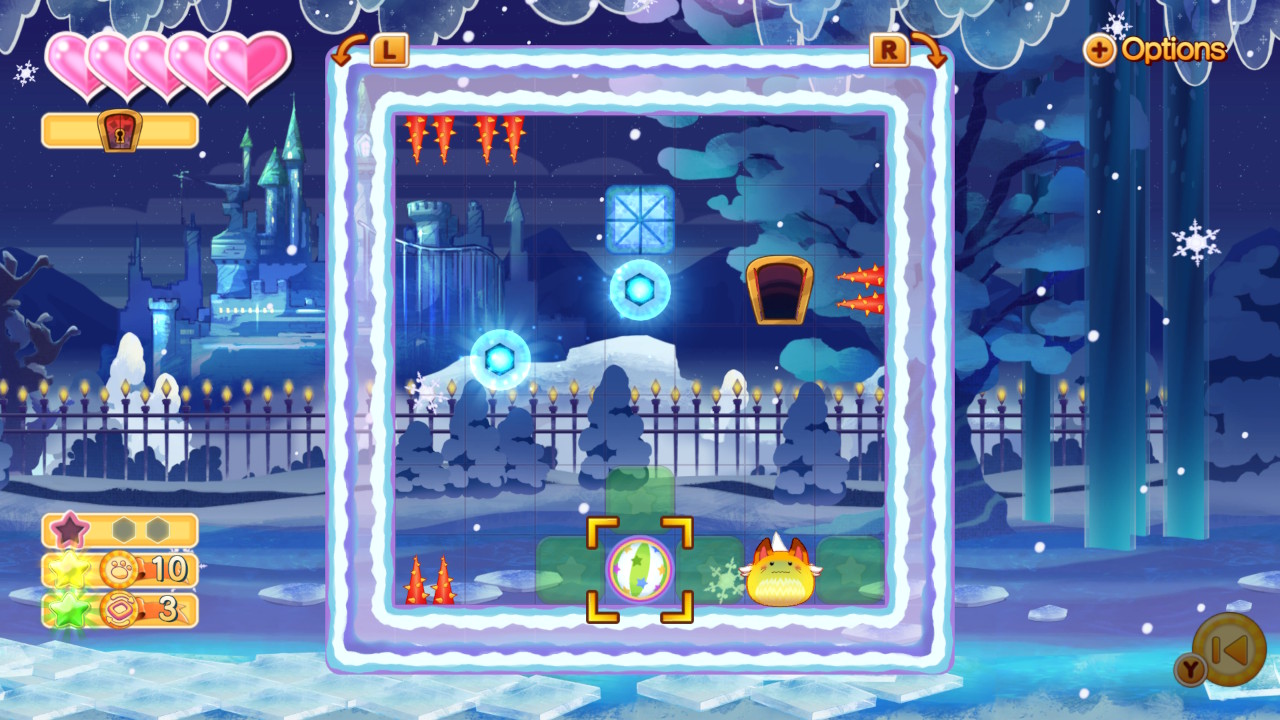 Overall, the game is rather hit and miss. The puzzling action is enjoyable for the most part, and the mechanic of rotating the stage combined with Kulu’s rather limited movement help to provide an interesting style of puzzle. The visuals are extremely pretty across all play modes that the Nintendo Switch has to offer; bright colours, cute character design, and clear, vibrant puzzles are all present. The soundtrack boasts the odd catchy tune too, making the overall aesthetic very pleasing on the senses.

It is a shame therefore that it is all let down by some odd decisions. There’s a heart-system for example, whereby you fail if you lose all five hearts by taking damage. With the puzzles only taking around five to ten moves on average, this is rather pointless as you don’t lose any progress anyway. It is even more of a shame that the dialogue is so out-of-place and it – along with Arika’s presentation – is so vulgar. Naturally, all players have different tastes and this may not bother some people at all, but my personal view is that this game seems to throw it in for the sake of it – and in a title that presents itself as something for children no less. It is absolutely fine to have sexual content within any form of media or entertainment when appropriate, but not in something disguised as an innocent puzzle adventure for kids.

For all these reasons, it’s hard for me to recommend this game to anyone. The content doesn’t seem to fit within any particular target audience, and it is hard to imagine the gameplay pleasing players enough to justify a purchase. Unless you absolutely need all these awkwardly combined elements I’ve described, it might be best just to stay away.

With some decent puzzle-based levels, Puzzle Adventure Blockle will provide players with a few hours of entertainment to pass the time, but will likely be forgotten after a few bursts of play or completion. With some strange and out-of-place decisions regarding the direction of this game’s narrative, it’s hard to recommend this to a younger audience, yet somehow it doesn’t feel like it would satisfy the majority of older gamers either. Puzzle Adventure Blockle is an odd release, and one which should be thought about twice before you make a purchase.