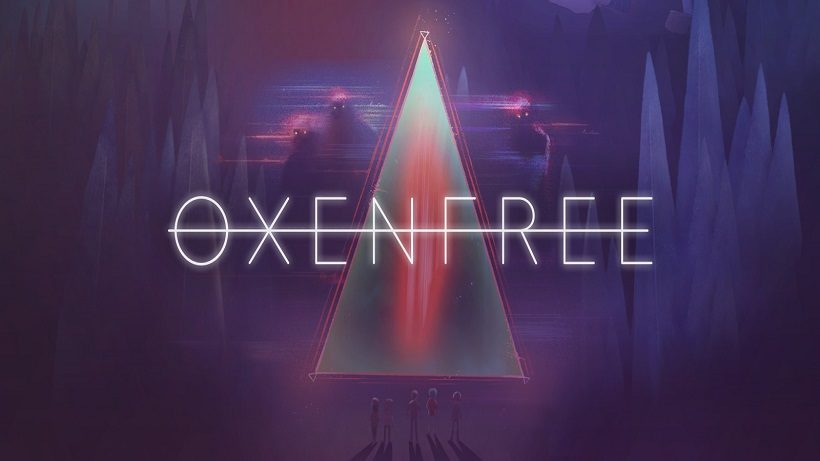 It took Night School Studio’s Oxenfree a matter of minutes to have me hooked. The game, a supernatural, kinda scary story about a group of teenagers who uncover something mysterious and ancient on a remote island, has the tropes of many horror films – but replaces the clichés with a clever tale about relationships and growing up that is certain to leave a lasting impression on those that experience this title.

The game starts on a ferry, and playing as blue-haired teenager Alex, you discuss with your friends what lies ahead when you arrive at Edwards Island. As expected from a group of teenagers travelling to a remote beach, the itinerary involves hanging out, playing truth or dare and drinking beer. There is an urban myth about the island that is discussed, whereby that if you tune a radio into certain frequencies whilst on the island you will hear ghostly messages – and so Alex and co. decide to investigate. After accidentally unleashing a paranormal force on the island, the group must figure out what the force is and how to stop it.

The gameplay in Oxenfree will be instantly recognisable to anyone who has played either a point and click adventure or a Telltale game before. The conversations flow freely between all of the characters in the game and you are given multiple choices over which response you want Alex to join in with. The decisions and responses that you choose influence how the rest of the game will play out, meaning that there are many narrative paths for you to see and a variety of different endings that can be achieved.

It is testament to how great the storytelling is in this game that you will want to play through multiple times to discover the different possibilities and get a fuller understanding of what is going on in Oxenfree‘s story. As soon as I finished my first playthrough I was loading the game back up to start a second run through so I could understand more about what I experienced the first time round and cleverly, the game’s New Game Plus mode acknowledges choices you’ve previously made and characters also have a sense of déjà vu and the paranormal beings will mess and taunt the characters even more – which I thought was a really neat addition!

Accompanying the engrossing story is a soundtrack that is something truly special. Composed by scntfc, the soundtrack is full of synth tracks and combined with the paranormal tale made me draw comparisons between Oxenfree and the Netflix series Stranger Things. Tuning the radio that Alex carries around would also produce static crackling until you’d pick up a station – where you’d hear old time music, news reports and the like to further build the game’s atmosphere. Oxenfree‘s 2.5D art style is also particularly pleasing, with the dark elements of the game’s landscape combining with the bright colours of the supernatural elements to give a real sense of worlds colliding.

The only criticism I can throw at the Switch version of Oxenfree is that the loading times were a little lengthy. Other than that this is one of the best stories I have had the pleasure of playing through. The fact that I can experience this both on a big screen with Pro Controller in hand or under the duvet using the touch controls on the Switch to navigate around this wondrous world certainly made it easier for me to get drawn into this beautifully told story – switching between modes as often as the game switches between planes.

As hard as it has been trying to write this review without giving away too much of the story, this has also been one of the easiest reviews I have ever written. I cannot recommend this game enough, so sit down and let Oxenfree take you on a journey – you won’t regret it!

Oxenfree mixes a spooky story, superb soundtrack and vivid visuals to create an experience that is truly memorable. I cannot recommend this game enough to anyone who enjoys getting lost in an atmospheric adventure.