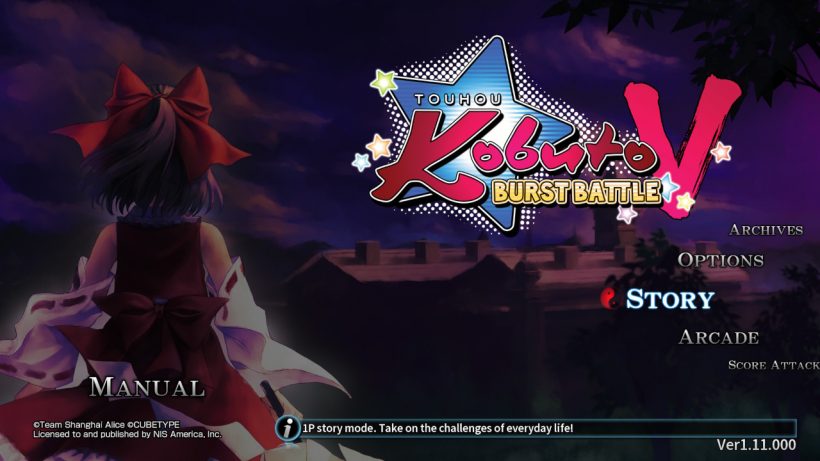 The characters, settings and references in this game come from Touhou 6, and if you’re coming in fresh to the series, the content of this title will go over your head and the sequencing of events in the Story will feel very alienating. All 9 playable characters go through a similar series of events, consisting of 5 fights between AI opponents and a boss in the form of a giant head. Though it hardly feels like a story, since all of the fights feel forced and nothing is ever contextualised or justified. Insignificant things lead to ‘I guess I’ll have to force you’ in almost every section of dialogue, proceeded by chucking you into a ‘danmaku’ battle. You get an incredibly lacking story which gets repetitive after the first few run-throughs, which is an atrocious absence of content for a retail release. 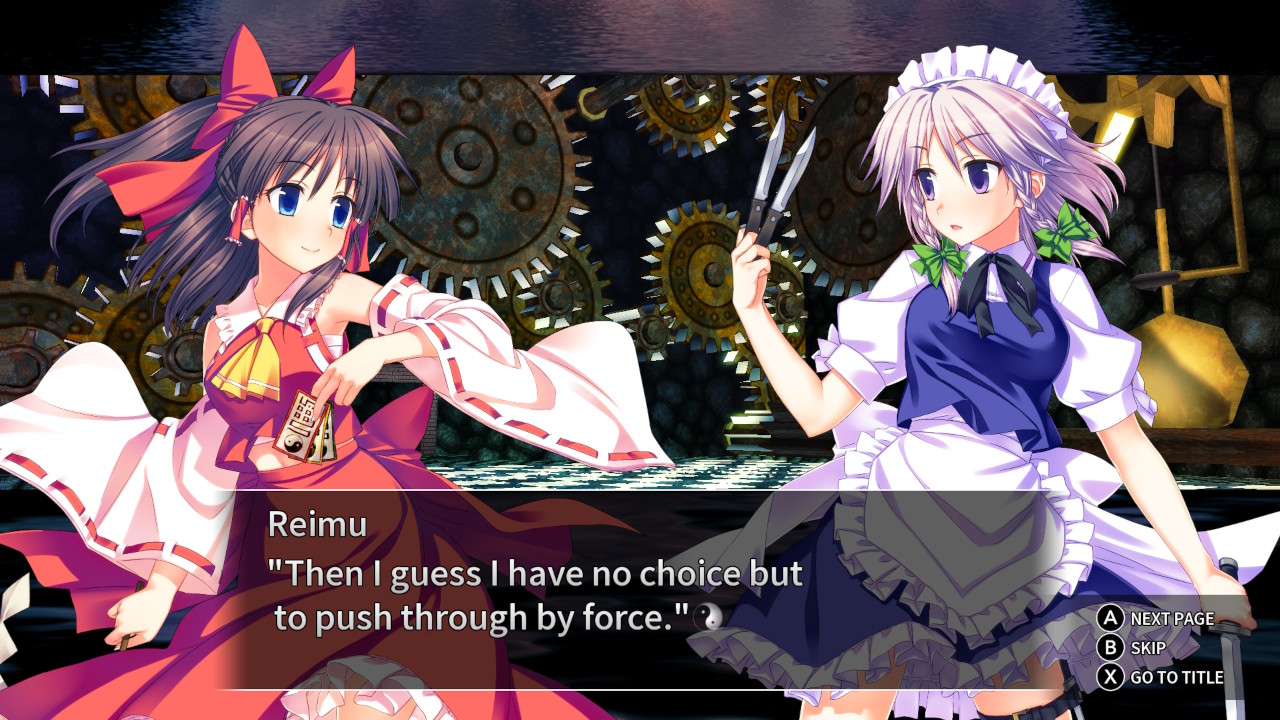 Moving on from the worst aspect of the game, you’ve also got an Arcade mode (seeing how many opponents you can defeat consecutively), Score Attack (defeating endless opponents to aim at a high score), Vs Com (Training or AI battle), Vs Human (split-screen multiplayer) and Vs Online (online play, and for some reason local wireless is categorised in here too). Considering the awful Story, painfully easy AI and (almost) non-existent online lobbies, the best mode of the game has to be local multiplayer. It supports single Joy-Con play, though oddly all other modes don’t, and will force you into using 2 Joy-Con or a Pro Controller. A lot of small things like this make the game feel unfinished, such as no tutorial, noticeable audio crackle, a dodgy camera and obviously the scarce amount of content. Though the music remixes are really nice!

Despite the questionable legitimacy of the cause of combat, it is undoubtedly the best aspect of the game. Armed with 3 types of attacks which can be modified depending on how you’re moving and which other buttons you combine with them. Some modifications drastically change the properties of the move, while most just alter the trajectory or path of your projectiles (of which make up the majority of your arsenal). You only have a few melee attacks but in most cases you’ll be fighting from a distance, dodging and dishing out hell storms of magical bullets. Dashing and flying at high speed when your Action Gauge is full is so fun to do, but overusing these actions will make you Fatigued and unable to move. Manoeuvrability and fluidity between using different attacks and techniques gives the game a solid combat system and it is a joy to play between more skilled players. 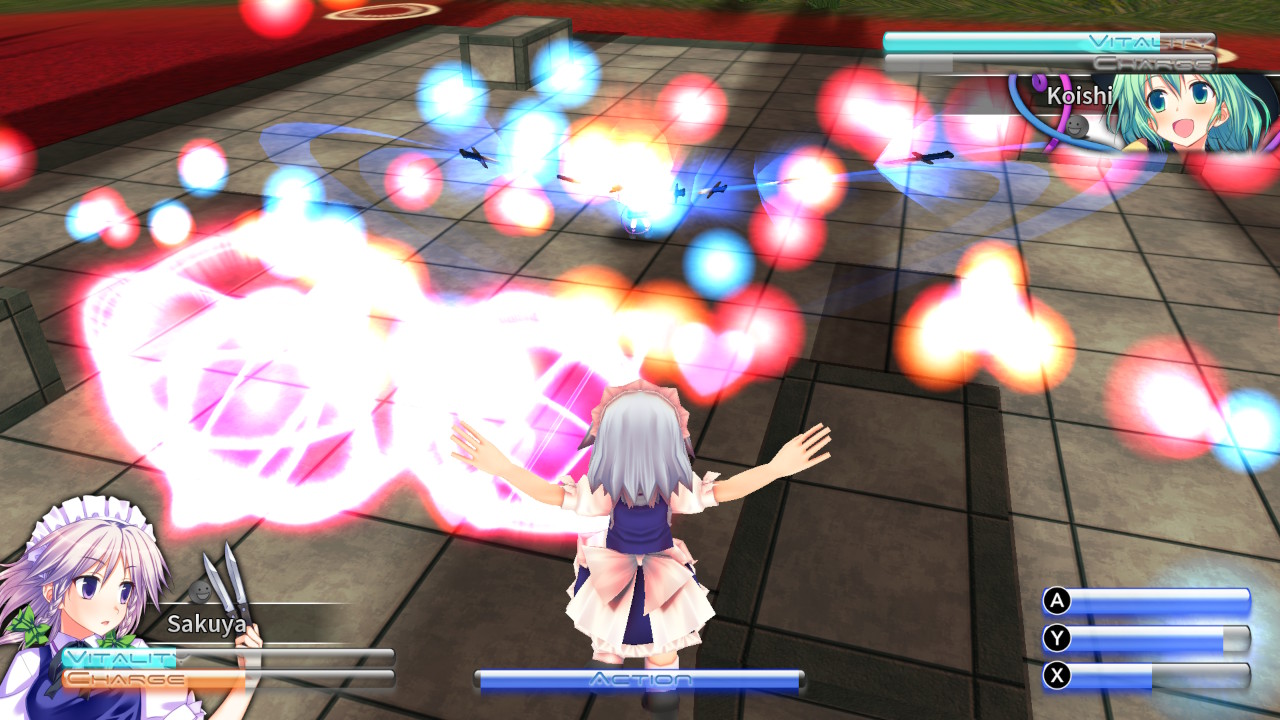 That being said, for a franchise that’s notorious for being difficult this game is far too easy and unbalanced. Some characters can nearly destroy others in a single hit of a regular attack, whereas your Spell Card (your most powerful move that has to be charged) may only do a scratch whilst an even more overpowered character is available as paid DLC – which I feel is incredibly cheeky, given the limited roster. The highest-level AI can’t perform basic things like Quick Fall and can be punished just as easily as a low-level AI. On top of this, the only boss in the game has barely any collision, so you can actually hide and attack it from the inside!

Overall, this game feels unfinished and is missing key elements and content that could have developed it into at least a decent title worthy of its price. Even my friend who is a die-hard Touhou fan (who helped me test multiplayer) told me how he got the impression it was more of a demo or beta build, and pales in comparison to the 2D fighters in the series. I have no idea how it got through Quality Assurance, unless they were only looking for accurate Touhou references and decent combat, because that’s all that the game delivers.

Despite accurately interpreting a respected franchise and having solid foundations for a fighting game, Touhou Kobuto V: Burst Battle delivers a slither of content that is not only disappointingly lacklustre. but also unwelcoming for newcomers and littered with inconsistencies and glitches that further hinder the quality of the experience. Local multiplayer is where this may redeem itself, but even that’s stretching it for a retail game. For the price, it’s not something I’d recommend.