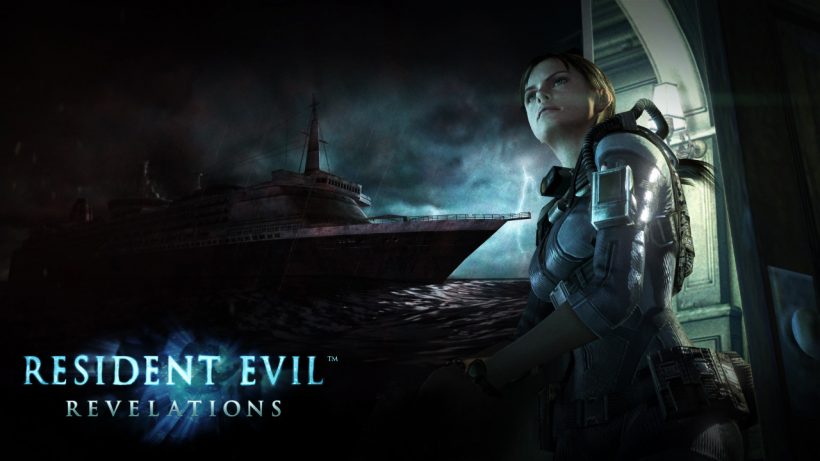 Revel without a cure…

Originally released as a Nintendo 3DS exclusive back in 2012, Resident Evil Revelations is resurrected once more to make its third appearance on a Nintendo console. Taking the form of a more bite-sized (see what I did there) adventure, Revelations puts you in the shoes of Resi stalwarts Jill Valentine and Chris Redfield – who are tasked with investigating the mysterious goings-on onboard the Queen Zenobia cruise ship.

The game delivers the story in an episodic structure and sees the story told from the perspectives of both of these characters – with you switching between the two in during chapters within each episode. Both Jill and Chris have partners to accompany them during their adventure, with the well-built Parker accompanying Jill and the rather under-dressed, overly flirtatious Jessica at Chris’ side. These side characters seem to function mainly as a way to help drive the action along, hinting at the next objective and nudging back on track if you are going in the opposite direction of said objective – which happened to me frequently! They do also offer a helping hand during combat but are about as much use as a chocolate fireguard, so I resorted to hiding behind them and using them as human shields.

Obviously, a Resident Evil game isn’t complete without the monsters that are trying to eat you alive. Here we see the cruise ship infested with the infected, and it is your job to defeat them on your way to finding out how this luxury liner came to be in this state and how to save the world from being overridden with this virus. There are a wide variety of nasties on display here and, as with most games in the survival-horror genre, never enough bullets to stop them! That being said, there is a distinct difference between playing as Jill and playing as Chris in Revelations – in that the Chris sections are a lot more gung-ho when it comes to the action. This breaks up the gameplay nicely and means that you are not always feeling underpowered and overwhelmed. Although I do feel that the difficulty balancing between the two characters is a little off. When playing as Jill I found myself struggling at times due to running out of ammo and getting a little swamped, whereas with Chris you seem to have stacks of bullets and can just mow down all foes that cross your path – this made some of the Jill sections seem rather difficult whilst Chris’ seemed rather easy. 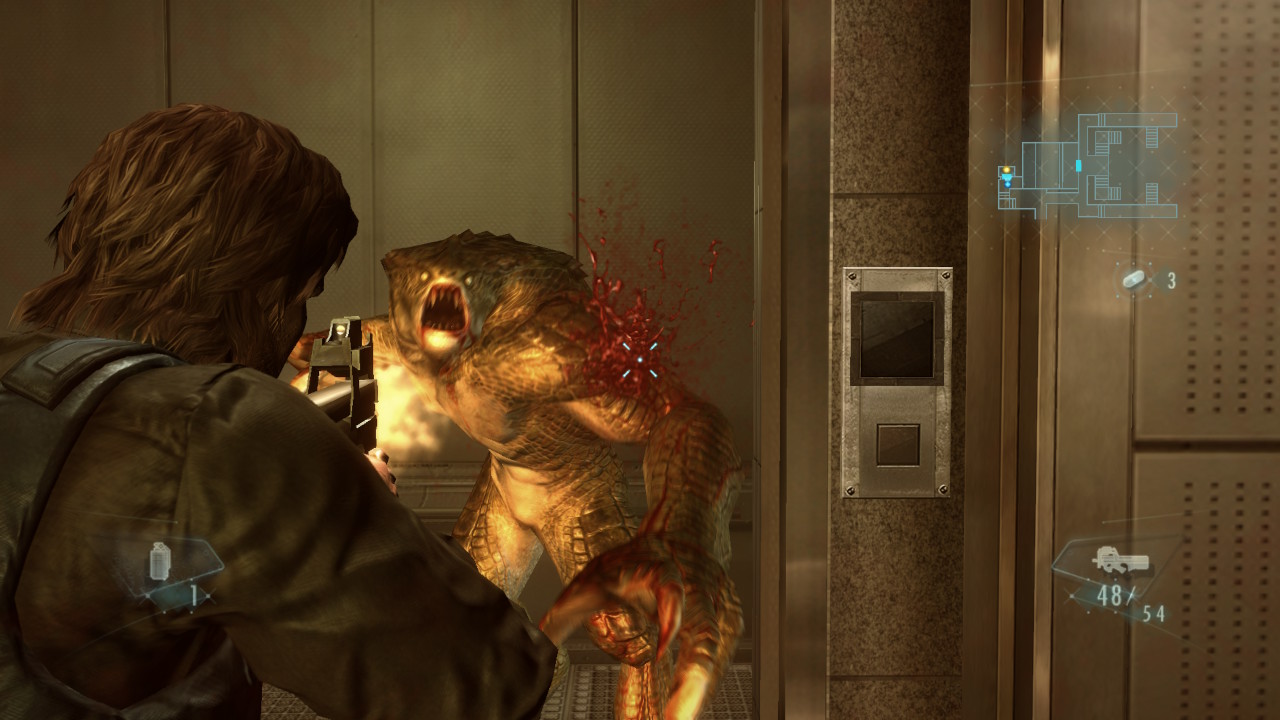 One of the new additions does help here, and that is the game’s motion controls that have been added specially for the Nintendo Switch version. As you are moving about the ship, you will use the right analogue stick to move the camera about like you would in most games. However, when holding the Joy-Con in each hand, pressing ZL to bring up your weapon to aim will allow you to use the Joy-Con to aim. I found that once I’d gotten used to this method of aiming, I was able to hit headshots with relative ease. Obviously, the only way to really use these motion controls is to play the game docked – as the Pro Controller has not been given the same motion treatment by Capcom.

Another use for the motion aiming is to control the Genesis. This item is a scanner that all characters have available to them that is used to (believe it or not) scan the environment. The importance of this item isn’t explained as well as it could have been, but it is an item that proved invaluable during my playthrough. Pressing L to equip it and then using either the right analogue stick or the motion controls to aim, you use this to search the environment and scan any points of interest. Doing this will reveal hidden items and also allow for you to scan enemies (either before or after you defeat them). It is beneficial to do this, as you will find hidden ammo dotted around the areas you explore, as well as collecting a green herb after every half dozen enemy scans – providing you with invaluable resources as you fight your way through this floating hell.

However, if you want to use the motion controls you will need to play the game docked, and it is here where the cracks start to show in this five-year old game. Don’t get me wrong, it does look good – and its performance is silky smooth! But when played in docked mode on a big screen you can tell it is a few years old when compared to newer titles. In handheld mode, you won’t really be able to notice this due to it being on a smaller screen. 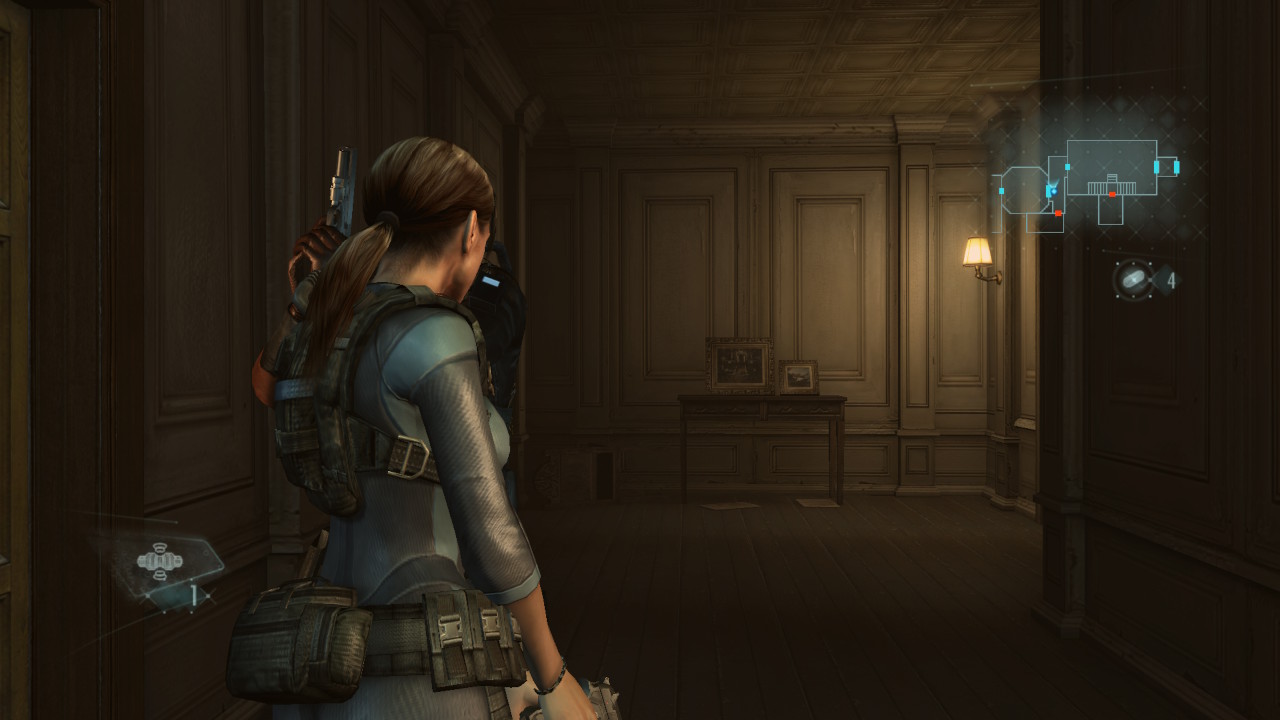 Once you are done with the eight-hour campaign, there is a Raid mode that you can tackle solo or with a friend. This mode sees you fight your way through a selection of maps from the main story, with differing enemy layouts for you to encounter. I wasn’t too keen on this mode, as I mainly play Resident Evil titles for their survival-horror stories – but I can certainly see this appealing to fans who want to add longevity to the title.

In all, Resident Evil Revelations is a great fit for the Switch, and if you haven’t already played the 3DS or Wii U version, you will be in for a treat if you are a fan of the survival horror series. The cruise ship setting is fantastic, and arguably the series’ best since the mansion found in the original. My only complaints are that the campaign felt a little short and the series has lost some of its puzzle/survival elements since the earlier titles. Those niggles aside though, I’d encourage you to jump onboard – you’ll have a whale of a time!

Resident Evil Revelations is a great entry in the legendary survival-horror series and a great fit for the Nintendo Switch. The bite-sized chapters make short bursts of play in handheld mode ideal, whilst also translating well to the big screen. Just make sure you don’t book any cruise holidays in the near future – it’s certainly put me off!