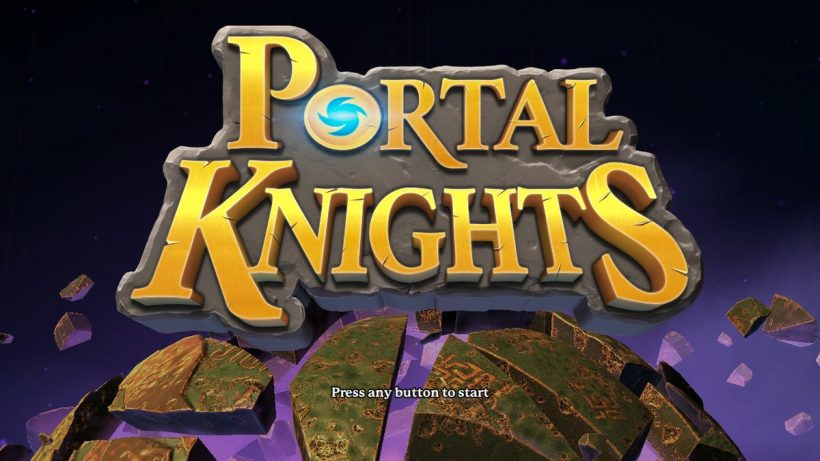 Before we get started, I have a confession to make. Unlike the vast majority of the human race, I have never managed to get myself stuck into Minecraft. My status as a Nintendo collector made me pick up Minecraft on Wii U when it was on offer, and the same applied to the Story Mode which was also released on the console. I haven’t picked up either of the Switch editions yet, but I will, and I’m going to get the New 3DS version too. But collecting something isn’t the same as playing it.

I have had a few minutes of pittering around with Minecraft on Wii U, though, and was a bit put off by the way that game chucks you straight in without a major handholding tutorial. The same thing happens here in Portal Knights; you’re straight into level one, and while it could be considered a tutorial of sorts, there’s a lot of things to be managing at once. Your initial objectives pop up on the screen and you get the imperative “craft all of these things to progress” missions to start you off. There are combat opportunities right away too, and these can take away all your health before you even know it if you’re a novice.

The one bit of crafting which is most crucial to progression is the portal stones. In levels, you’ll find a spot which needs to be filled with these stones, and when you explore around you’ll find the pieces you need to put extra bits of these portals to complete the construction of a door to another area. Practically every bit of the stage can be hacked apart for materials, and can then be reconstructed in whatever way you like until you run out of blocks.

But before you start taking them all apart for materials, some of the environments are quite beautiful. Level design is one of the things which is done really well here, and some of the stages have that Zelda-esque feel to them, making you want to explore. It’s a shame that all this exploring is slowed down by the crafting, which can become tedious. Need clothes? Craft them. Bricks? Craft again. Weapons, anything else, you know the score.  It must be noted though that the game isn’t perfect in terms of its visuals; there are certain spots in the world which are too dark to see properly, particularly when the game clock switches to night. Meanwhile, there are other situations where the camera becomes a nuisance.

It’s all quite tough to take charge of when you’re on your own and you haven’t got a background in games of this genre. Fortunately, you can choose an online mode, where a friend can help you as you both set about collecting materials and defeating enemies. Levelling up will help you take on bigger boss characters as per any RPG, and this does get a bit more gripping as you progress.

If you want this game, you’re going to want to get the Switch version for portability. The crafting and construction elements are better suited to long car journeys than a short burst in front of the TV, and the Switch version makes barely any sacrifices compared to its brothers on other formats. Just try having a Minecraft expert friend to help you out if you’re starting from scratch.

If you’re looking to entertain a kid who’s into Minecraft, get onto Portal Knights, because it offers a lot of the same. It’s better for youngsters who have a lot of time on their hands, of course – adults will have a tough time getting a satisfactory experience when playing in short bursts. At £24.99 on the eShop, it’s overpriced – hopefully the pricing isn’t too silly by the time the physical release arrives.

One thought on “Portal Knights Review”