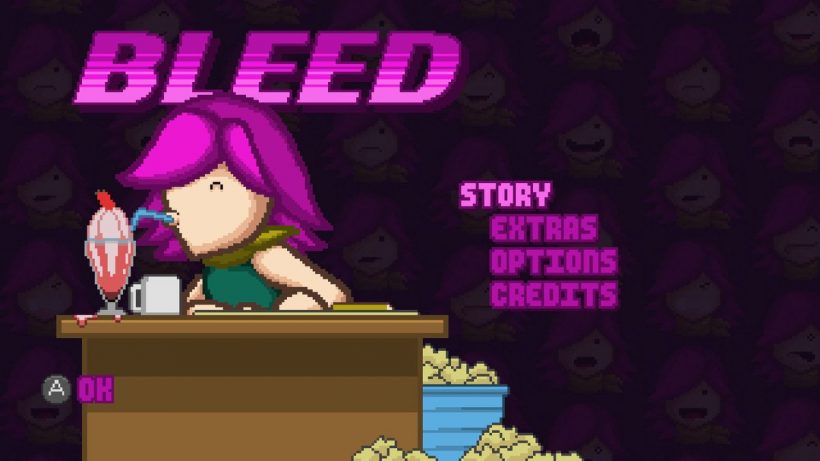 There are times in your gaming life where you yearn to go back to the roots of your hobby and pick up a simplistic platformer where the emphasis is on skill. Of course, not all platformers are equal, however, so how does Bleed stack up?

This is a twin-stick shooting platformer where you are able to fire off an unlimited stream of bullets at enemies using the right stick while dodging all incoming attacks with the left. Your standard weapons are dual pistols and a rocket launcher, with the latter obviously causing the most damage but the former having the better fire rate. You can progress through the entire game with just these two weapons alone, but you can purchase extras including a shotgun in the in-game shop.

You have to keep on the move constantly; any dithering about will render you at the mercy of all the bullets raining down on you, and the skill is in being able to jump out of the way while you’re aiming on the move. The levels are quite short, but they do present a decent challenge – certain stages will have you competing against the clock as the viewpoint shifts quickly and regularly – make sure you’re in the right spot when the camera moves or it’s curtains for you.

The pretty unique part as far as the controls go is the jump dash – jump with the right trigger, then jump up to three times more to negotiate gaps or change direction. Some jumps can’t be made without it. This is a little too fiddly and doesn’t often let you land in the spot you want, and usually has you smack into an enemy during your flight too.

Boss battles happen quickly, and they happen often. There’s a great level of variation in what they offer, too, which is always a good thing. Some, of course, are more challenging than the rest, and particularly this is the case when they’re unleashing attacks throughout the battle and their health doesn’t go down quite as quickly as you hoped it might. Luckily you can slow down time to work on your aiming, but only for as long as a meter allows you.

Despite its name, Bleed isn’t quite the gorefest you might expect. Yes, some enemies explode into pieces in a rather grisly way, but for the most part they’ll just pop out of existence or disappear in an explosion. The target audience, though, given the retro presentation, was always likely to be those aged eighteen and above, so perhaps it would have been better to see a bit more violence befitting of the game’s moniker.

The audio is the music that you’d come to expect with indie releases such as this, with a retro theming to match the visual presentation. You know what you’re getting – it’s a left to right platformer, with not too much expense spent on environments and backgrounds. There’s no slowdown at all though, which is always very welcome in a Switch port.

All in all, Bleed handles well, but it’s let down in places, particularly later on in the game, by bosses who dish out unavoidable attacks. With such limited health unless you purchase expansions (fortunately using in-game currency), it’s an overly tough ask to do even if you’re playing on the normal difficulty setting. I love a challenge, but make it a reasonable one.

Bleed is a good, solid platformer which offers a good chunk of replayability, and there’s a lot of challenge on offer in the higher difficulties. It won’t last you long though – its seven levels will take just over an hour.