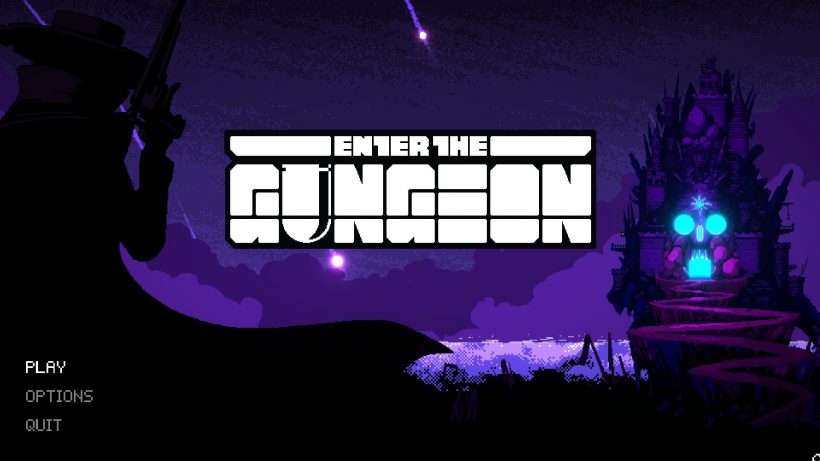 In its first year on the market, the Switch has seen an almost overwhelming amount of support from indie developers, with dozens of new releases hitting the eShop every month. A lot of these are reasonably serviceable ports that understandably get lost in the relentless release schedule. Occasionally though, a port will come along that genuinely feels like it was made precisely with the Switch in mind, and Dodge Roll’s Enter the Gungeon is exactly that game. Originally released in 2016, the title already came highly recommended and – thanks to the Switch’s portability – is elevated to even greater heights, becoming an absolutely essential addition to your library.

Enter the Gungeon is a roguelike dungeon-crawler in which you take control of one of four gun-toting misfits within a procedurally generating ‘gungeon’. It’s your job to explore each level of the gungeon, clear out the rooms of all enemies and discover its many buried secrets, with each level culminating in a boss fight. 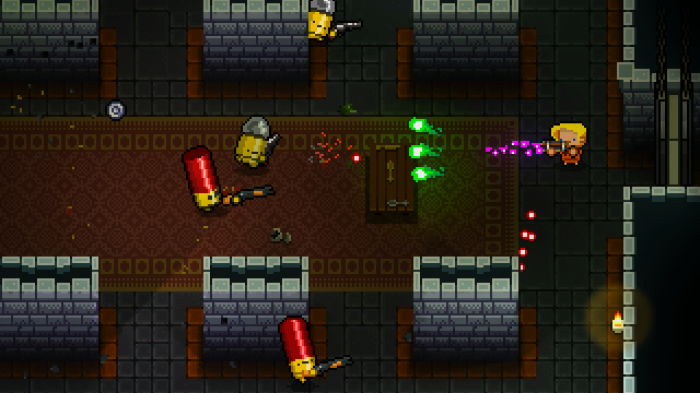 Of course, thanks to the gungeon’s completely random nature, it’s entirely possible to stumble across the boss room almost immediately. To proceed however, would be incredibly unwise – your chosen character starts off with pretty basic weaponry, which is reliable for the most part, but next to useless against the bosses. Throughout each level, you’ll obtain new guns either through pure discovery or via the game’s merchant. This is Enter the Gungeon’s bread and butter – it is packed to the rafters with all sorts of weird and wonderful guns, and discovering their function is an absolute joy. You may find something as useless as a Pea Shooter or as formidable as the Crown of Guns – again, it’s completely random.

The core gameplay itself in Enter the Gungeon is as close to perfection as you can get. Moving and shooting is utilized with standard twin-stick controls, and whilst this mechanic has been somewhat overused recently, Enter the Gungeon is one of the strongest examples of it – it just works. It also borrows elements from bullet-hell ‘shmup’ titles, with enemies frequently throwing overwhelming amounts of bullets in your direction. Here, you’ll need to make use of the game’s other core mechanic – the dodge roll. A quick tap of the L button will allow your character to leap out of harms way, allowing you to get into a stronger position to take out your opponents. Timing is crucial though, as you’ll be open to attack the moment you land – you’ll die a lot in Enter the Gungeon, but the game remarkably never feels unfair. If you die, it’s more than likely your fault. 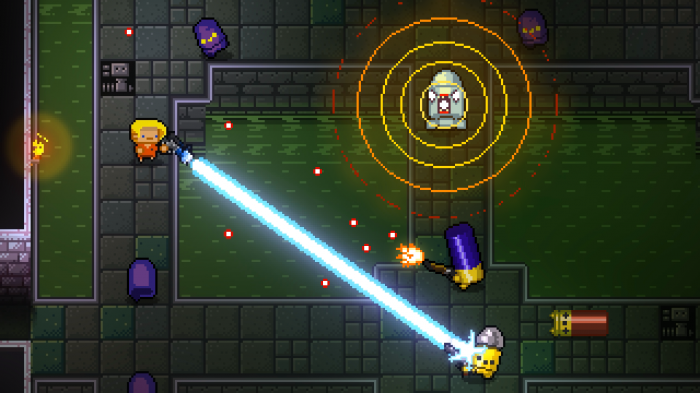 Visually, Dodge Roll has done a wonderful job with Enter the Gungeon. Whilst a lot of the characters and environments utilise frequently repeated assets, it consistently looks both charming and atmospheric. The enemies themselves play directly on the main theme of gunplay and take the form of anthropomorphised bullets. Not only is this ridiculously adorable, it is also a great way of triangulating what kind of threat they may present – the standard bullet enemies most likely wield basic handguns, whist the shotgun shell enemies blast out waves of bullets, much like a shotgun (shocking!). Through practice and trial and error, you’ll eventually be able to recognise exactly what each enemy can do, and this is absolutely paramount to your survival.

The guns also look spectacular. Some of the more powerful weapons fill the screen with light and colour as you rain down justice on your enemies. This is taken to new heights during the boss battles where you not only have a behemoth of a weapon yourself, but you’ll also need to weave in and out of a barrage of bullets from the boss. It can often look and feel overwhelming, but it never looks bland. 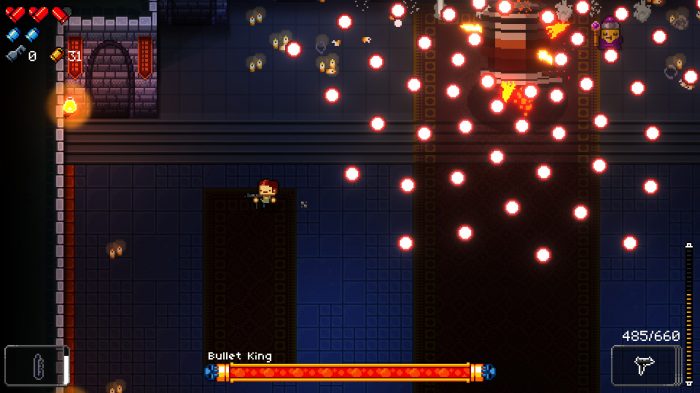 Of course, the core gameplay is supported by a generous helping of extra treats. Throughout the levels, you’ll also come across various items granting perks to your character. You might pick up something that will increase your overall life gauge, or something that grants your weapon a helpful laser aiming device. Again, you can also pick up items from the game’s merchant, but his prices ensure that you’ll never be able to clear out his stock. There is also a selection of supporting NPCs to chat to in your journey, and many of these will aid you in some form or other, with one granting you the ability to skip entire floors should you provide him with the necessary items.

Enter the Gungeon is one of the most accessible, beautiful and downright fun games currently available on the Switch eShop. Not everyone will get on with it – if the thought of procedurally generated environments fills you with dread, then perhaps this is not the game for you. For everyone else though, this is a game that keeps on giving, and the more you put into it, the more you’ll get back. The gameplay is second to none, and you’ll have a riot with some of the game’s more outrageous weaponry. Enter the Gungeon is a shining example of how to make a dense, addictive experience, and you’d be doing yourself a disservice if you don’t pick it up.

No game is perfect, but Enter the Gungeon is currently the pinnacle of Switch indie titles. It displays beautiful pixelated visuals, addictive twin-stick gameplay and outrageous rewards around every corner. A must buy!