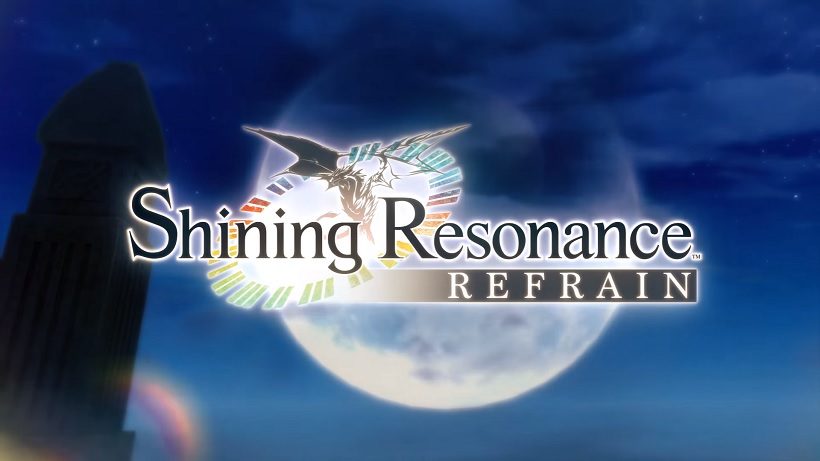 Release your inner dragon in this remaster of the Japanese PS3 classic Shining Resonance, coming to Nintendo Switch in Summer 2018.

Shining Resonance: Refrain will be available for Nintendo Switch, PlayStation 4, Xbox One and PC (via Steam), and tells the story of the young sword-wielder Yuma and his friends as they attempt to fight against the Empire. Yuma, who has the soul of the Shining Dragon within him and can transform into it at will by unleashing the power conducted through his sword, has become a target for the Empire after his unity with the Shining Dragon reveals the long-presumed extinction of Dragons to be false. Together with your friends, you must – as the game’s Steam page nicely puts it – realize your destiny, save Astoria, and unleash the strength you’ve always had locked away!

Shining Resonance: Refrain will include, in addition to all of the game’s previous DLC packs (included as part of Refrain‘s base ‘Original Mode’), a new mode titled ‘Refrain Mode’, which will unlock the Imperial Princess Excella and Dragonslayer Jinas as party members for an entirely new and innovative gameplay experience. It is advised that you refrain (not even sorry for the pun there) from playing this mode until you’ve beaten the game once on Original Mode if you have never played the game before, as it could involve unwanted spoilers if you dive right in.

With these new team members at your disposal, it will be important more than ever to play to their unique strengths and abilities whilst also deepening the relationships you hold with them. Through events, dates and other in-game features, you will be able to bond with your teammates and unlock their full potential on the battlefield; you might even trigger ‘Resonances’ with them which can lead to entirely new level of support! Additionally, Shining Resonance: Refrain will have both English and Japanese voiceovers available for players to select, and will adhere to the series’ recent trend of placing emphasis on music-based mechanics by introducing a new music-based system called ‘B.A.N.D.’, which will allow you and your team members – all of whom use weapons called ‘Armonics’ which double as instruments – to indulge in various beneficial effects depending on what song they play in that particular session. In an interview with Jacob Nahin, the Senior PR Manager of SEGA of America, Localization Producer James Kuroki explained more about the system:

Dragons share power with mankind, and mankind provides power to the dragons through the use of music. All of the party members use weapons that double as instruments and you can perform sessions during battle, providing various benefits such as increasing the party’s speed or making the enemy more vulnerable to certain attacks. There are several songs in featured in the game, done by Elements Garden, a music production group that has created many hit songs for various artists, video games, and anime. And the songs are sung by the Japanese voice actresses, including Saori Hayami, Asami Seto, and Nana Mizuki. [source] 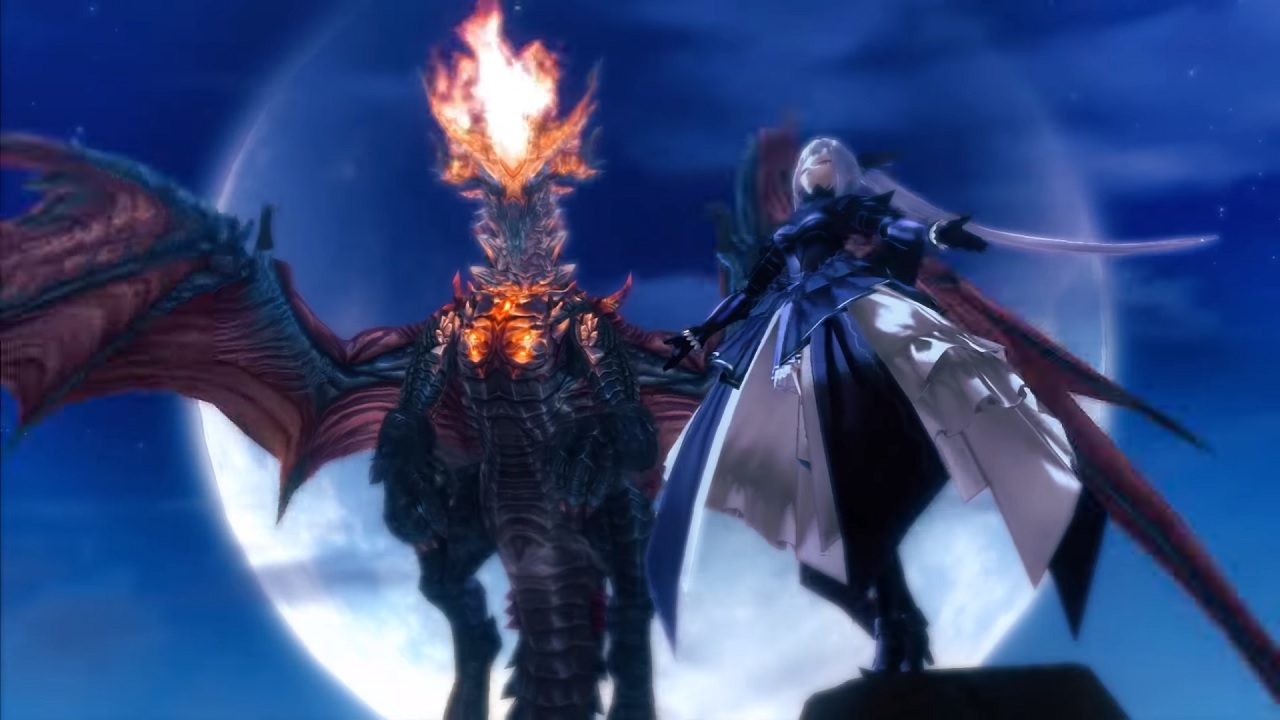 As if the above new features weren’t enough, there is also a special ‘Draconic Launch Edition’ of the game planned for those who pre-order the game on all platforms – though from the promotional artwork provided on Shining Resonance: Refrain‘s official website, it looks as if PC is sadly excluded from the party. This special edition will include a collectible metal clipcase featuring character artwork of Excella, Sonia and Kirika, and will come at no extra cost to the consumer than the standard day one edition.

Shining Resonance: Refrain will be officially available to pre-order from the official website soon, though it appears to be appearing for pre-order on some sites (such as VGP.CA) already for an estimated retail price of $64.99 CDN. 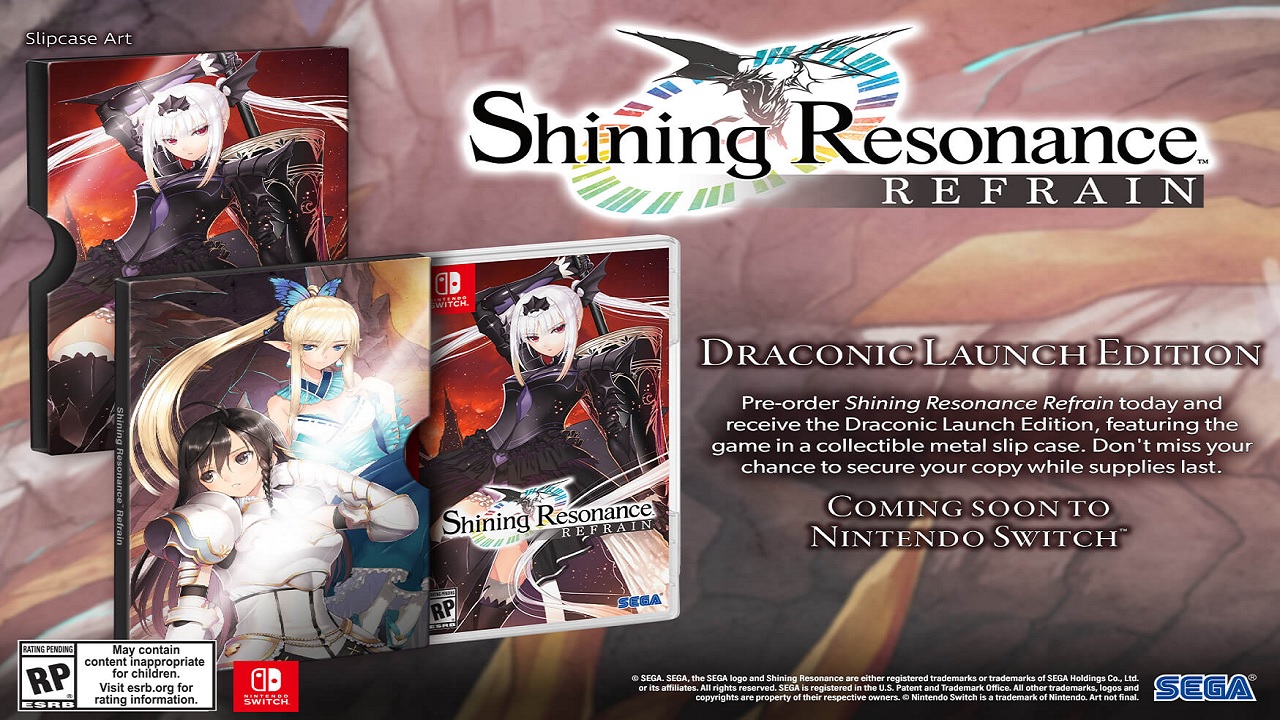 If you’re interested in Shining Resonance: Refrain or are questioning whether it will be worth picking up, tune into SEGA’s official Twitch channel at 12pm (noon) PST this Friday to catch a first glimpse of some of the gameplay of this localized remaster of the Japanese PS3 classic.

What do you think? Will you be picking up Shining Resonance: Refrain on Nintendo Switch when it releases in the summer? Be sure to let us know down in the comments, and stick with us here at Switch Player for all the latest news about the game.

One thought on “Shining Resonance: Refrain Heading to Nintendo Switch in Summer 2018”