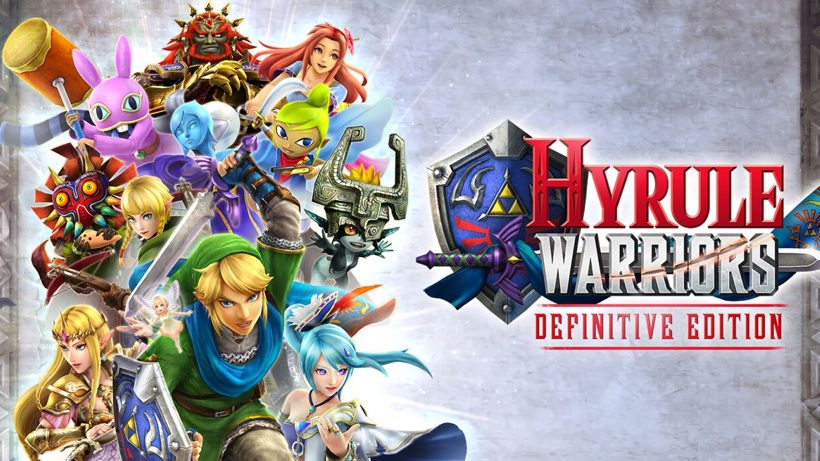 Hyrule Warriors Definitive Edition brings together all the previous released content from the Wii U and Nintendo 3DS versions of the title, plus all the downloadable content, and even throws in a number of new features and costumes and makes it playable on the Nintendo Switch. Unlike a traditional Legend of Zelda title this one blends the characters fans have come to love with the gameplay of the Dynasty Warriors series to create an action packed hack ‘n’ slash.

This story for this title is that a dark wizard by the name of Cia is causing all sorts of trouble in an attempt to gain the Triforce, which ultimately leaves the land of Hyrule in utter chaos. It is here that all the different characters and locations from across the Zelda series come together thanks to some portals which open up doors that break the space time continuum. It is then up to the player and 29 playable characters to put a stop to this madness and save all of Hyrule, multiple times over.

The combat in Hyrule Warriors Definitive Edition is as enjoyable as you would hope. The fluid motion of chaining attacks together is simple to execute and satisfying to watch unfold. Combos are easy to learn and become second nature in no time, with each one feeling unique in battle. This ties into the use of items which is seamless offering a range of creative applications. For example, you might find using a bomb will trigger an enemy’s weak point, offering a chance to unleash a long combo. A player can then also throw a well-timed boomerang and keep the attack going longer than intended, juggling their enemy in a stylist fashion. The options for creative freedom within the core combat system ensure that Hyrule Warriors Definitive Edition is a continuously fresh experience even after countless hours. 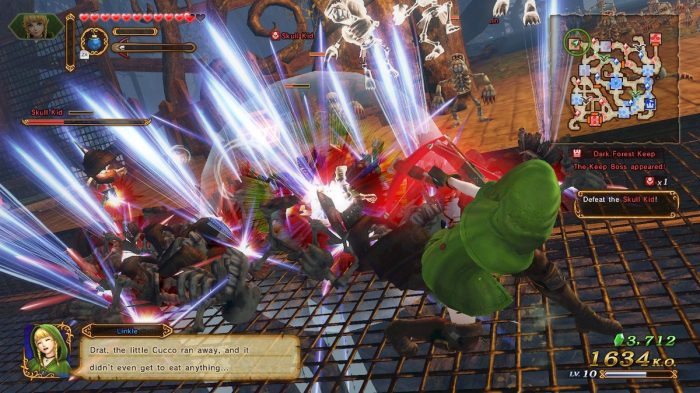 Thankfully, the title is also forgiving in the time players have to push buttons to continue their combos, making it more accessible than most would expect. Yet even if a player is unable to pull off some of the more complex combos they will still be rewarded with a visual spectacle as their character attacks, no matter the complexity of the combo. The attention to detail and craft that has gone into every characters animation shines on the Switch, with no two characters feeling like a carbon copy of each other. Sure, there are the odd similar detail but they are so small that it never takes away from the enjoyment of a single character and their fighting style.

Of course no title such as Hyrule Warriors Definitive Edition would not be complete without the inclusion of some rather epic boss fights and trust me, there are plenty. In fact throughout the main mode of the title you will fight a number of memorable characters from the Zelda games, both small and large, as they try to stop you on your mission. Most of the larger monsters will require you to find their weakness before you can even deal any damage to them which is a nice change of pace to fights. Should you get some of your teammates to join you in the fight, your special meter will recharge faster, offering more chances to unleash powerful attacks. It is therefore fair to say that every aspect of the gameplay within Hyrule Warriors Definitive Edition is designed to empower you as a player and offer new opportunities to ruthlessly destroy your enemy.

One of the most impressive elements of Hyrule Warriors Definitive Edition is the performance of the title. Hands down, the Switch release is the most stable of all with some impressive performance and a continuously stable and high framerate with next to noticeable drops no matter how intense the action on screen got. Loading times are fairly short, even offering a chance to play an Ocarina while you wait, with the boot time for the title still impressively short even now. 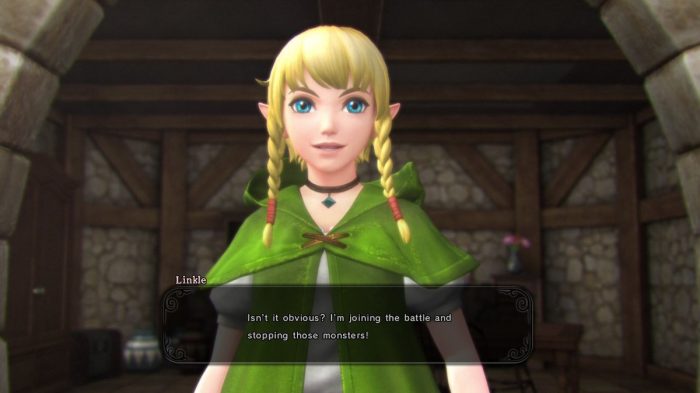 The only real complaints in performance comes in the form of sound effects and draw distance. The latter is the noticeable flicking of terrain and objects in a number of the stage intro videos and the odd cutscene. Though at times elements would pop into existence during gameplay it was so few and far between that more would never notice. Once or twice sound effects such as foot steps would loop even when standing still, but beyond the odd instance it was not a real problem.

In handheld and tabletop mode, the performance continues to be impressive with no real noticeable slowdown during gameplay. The only real issue is the size of the text on screen which, in these modes, becomes a bit too small to read at times often leading to missed narrative. As these dialog boxes are fairly quick to disappear as they appear, the issue is more problematic than you would think. When playing on a TV it is easier to read them but the speed is still an issue. Still, you can always check your mission objectives on the pause screen should you miss anything.

The title also has an odd choice when it comes to the controller selection. When you boot up the title you will be prompt to select a controller, regardless of which is already connected to the Switch. I opted for the Pro Controller but soon found that I could not control the title in any way with the attached Joy-Cons. This means that for someone using a Pro Controller, picking up the Switch and moving to handheld mode requires you re-configure the controller scheme. Not a deal breaker but somewhat odd given other Switch titles prompt you to make the change in game. Thankfully, the controls of the title are easy to master, accessible and not taxing on the hands. 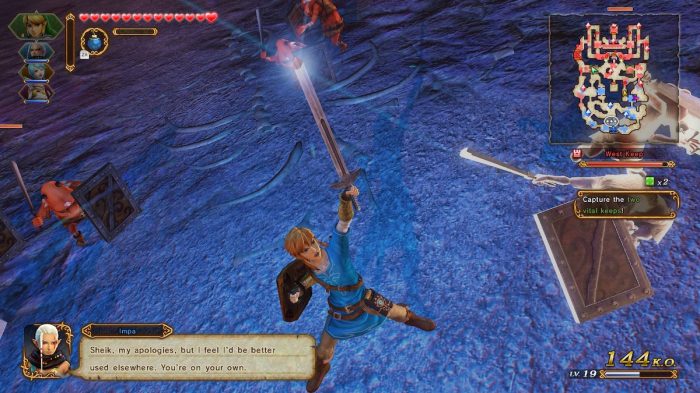 So with 29 playable characters, over 30 stages, the main Legend Mode including a side story for Linkle, Cia, and Wind Waker, countless unlockable weapons, items, costumes, Challenge Mode, Adventure Mode and even split screen coop, Hyrule Warriors Definitive Edition is a stunning value for money package. With so much content, superb performance and phenomenal gameplay, Hyrule Warriors Definitive Edition is one of the best entries in the Zelda and Warriors series making it a must have title for Switch owners.

Hyrule Warriors Definitive Edition is a fantastic hack ‘n’ slash title that brings together the best of the Legend of Zelda series and the Dynasty Warriors games. With plenty of content, superb performance and phenomenal gameplay, this is a must have title.