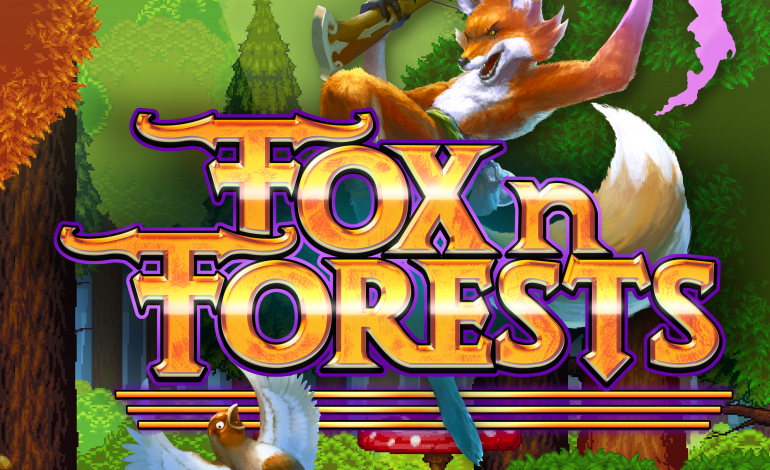 It’s hard to avoid the feeling that you’ve blown into a cartridge, slammed it into the slot, and pressed the SNES’ on button when initially loading up Fox n Forests. A retro-style 2D action platformer that harkens back to the days of Ghosts n Goblins, ActRaiser 2, and other 16-bit classics, this sly fox’s journey to restore the titular forest’s magic tree certainly looks the part, but sadly falters in its all-too authentic approach to difficulty and control.

As already mentioned, Fox n Forests absolutely nails its presentation. The pixelated graphics are vibrant, beautiful, and offer a level of detail that wouldn’t typically be possible on the hardware it thinks it’s running on. All of this rather successfully helps the nostalgic feels to set in. A weird sensation to have for a recently released title, but a welcome one. Each of the game’s lengthy levels offer a feast for the eyes the farther you get, and Rick the fox’s core ability to flick between seasons cements this even more so. 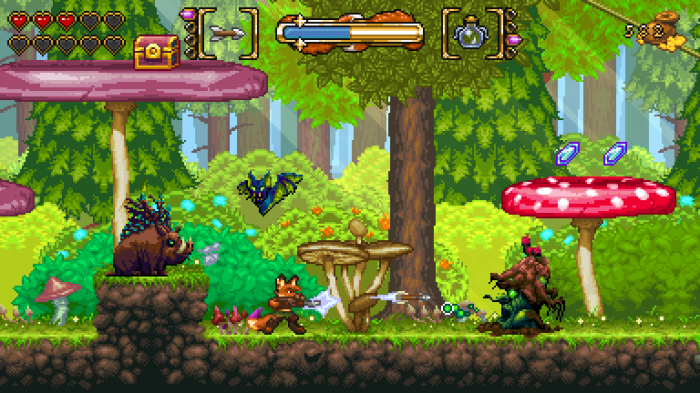 Fox n Forests’ gameplay plays out as your typical 2D side-scrolling fair, requiring you to guide Rick in dodging traps, thwarting enemies, as well as overcoming the many various platforming sections standing in your way. What could’ve been fairly basic, however, is elevated thanks to the game’s aforementioned season-swapping feature, which can see you perform such feats as tricking jumping electric eels to slam back down into their river only to find it frozen. While not as fleshed out as it could’ve been, I certainly had fun looking for other smart ways to capitalize this mechanic.

Changing time between winter and autumn, summer and spring, or any mixture of these also proves useful for revealing hidden areas within levels, of which you may find yourself doing a lot due to how short Fox n Forests actually is. There are six core levels overall. This might be disappointing to some, but when understanding that its levels are designed to be replayed (you acquire more powers and arrow types as you go), the pill is a much easier one to swallow. 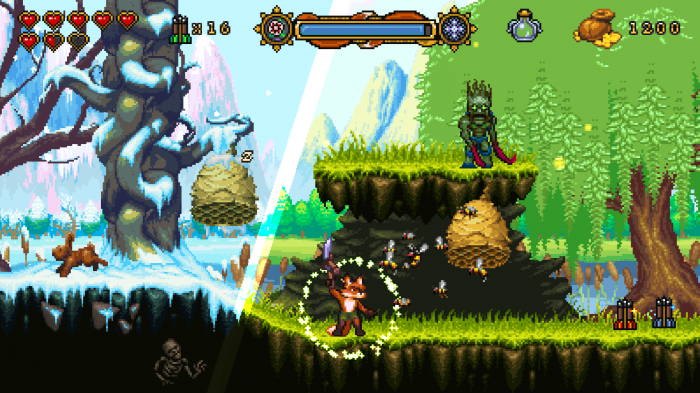 Less so is how Fox n Forests handles. You see, in addition to your main ranged crossbow attack, Rick also has a series of melee moves he can perform. The problem comes from the fact that both are mapped to the same button. This makes it extremely difficult to do such things as duck an enemy’s attack and shoot them from a distance. Rather, Fox n Forests forces you to put yourself at risk rather than use your cunning as all foxes should, with many enemy encounters boiling down to a fight and flight back and forth. The more I played, I couldn’t help but feel that this was a strange tactic to stretch out Fox n Forests’ length.

This sentiment is also echoed in the game’s harsh checkpoint system which forces you to pay or, once again, take a risk. It seems overly punishing for no good reason other than to frustrate more than is necessary. Why make death so likely when control is so limited? Alas, Fox n Forests’ slightly dated approaches to difficulty and control didn’t ruin my whole experience, but others might not be as patient. 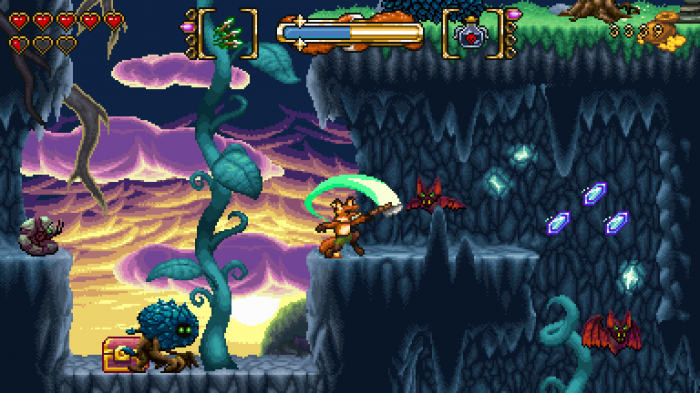 Fox n Forests ultimately ends up disappointing in some ways, but ultimately accomplishes its goal in feeling like a long lost 16-bit gem plucked from the SNES catalogue. It’s not game-changing by any means. However, what’s here is a fun retro style 2D platformer with plenty of original ideas. I only wish most of them were developed further.

Playing Fox n Forests feels like dusting off your SNES and jumping into a new title. Just don’t be surprised when the retro visuals are matched by retro difficulty and control.