Strawberries and Cream or a Centre Court wash-out?

I do love a good game of Tennis and, as it would seem, so do developer Camelot, as Mario Tennis Aces is their sixth entry in the long-time series, spanning multiple Nintendo systems. Could this be their best effort yet?

Well, for starters it does boast a sizeable roster of characters – with more to come by way of DLC – and it introduces so many new mechanics, different ways to play and adds in an adventure mode; the first such Mario Tennis title to feature a campaign since Power Tour on the GBA back in 2005. The elephant in the room, though, is whether they should have, but I’ll come back to that. 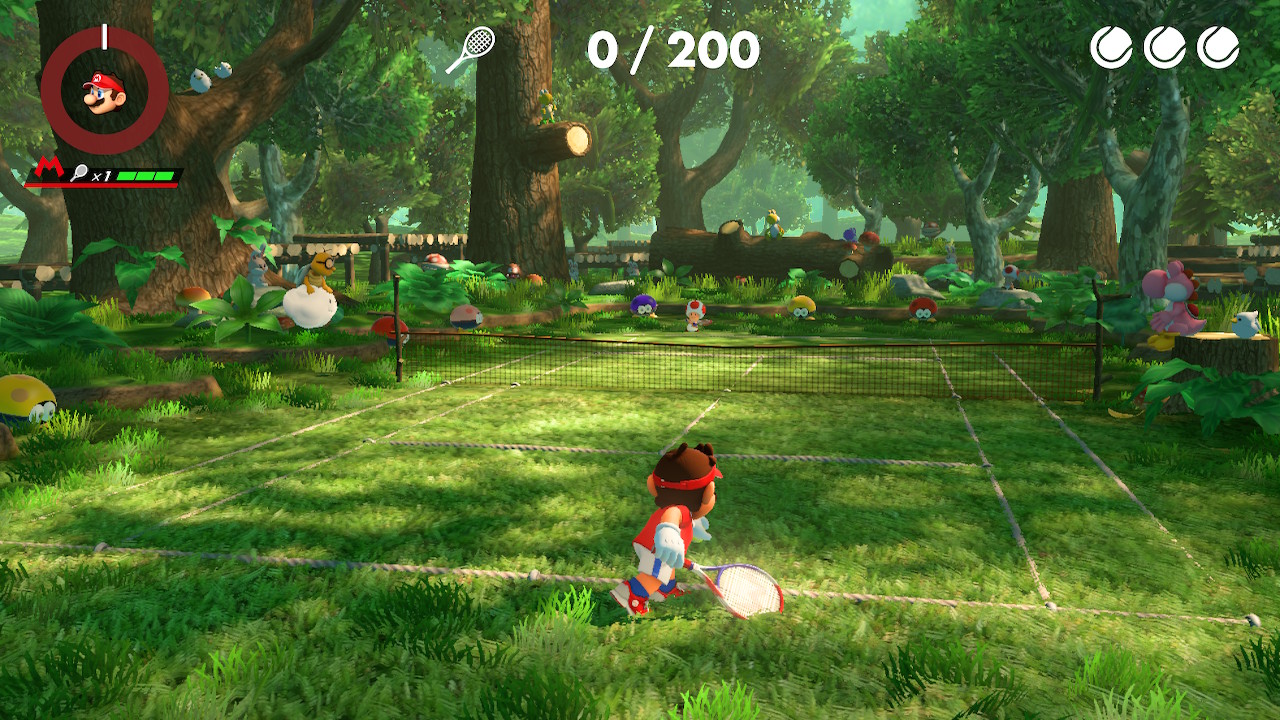 So, Mario Tennis Aces. After a somewhat lukewarm reception to the last game on the Wii U, Camelot and Nintendo return with a raft of new ideas for this one, and the most obvious is the energy meter. Successfully rallying and charging shots will power-up your meter and, in a manner similar to a fighting game, once full you can then unleash a variety of special shots. One of these is the “Zone Shot” which enables the successful player to enter a first-person mode to target a specific place to fire a shot (under the pressure of a time limit) into the opposition’s half of the court. You could be forgiven for thinking that something like that would be a bit overpowered, but these moves can be successfully blocked if your timing is right – and if not it’ll damage your racket. Your rackets can’t take too much punishment, though, and will eventually break…

Using your energy meter, you can also slow down time, which can help you reach an otherwise un-returnable effort, or engage in fast trick shots! The most devastating effect of a fully charged meter is your special shot, which all of the fifteen characters possess. Outside of these fancy moves, there’s also the standard tennis repertoire of shots and as you’d expect you’ll be top-spinning, lobbing, slicing, back-handing or throwing in a cheeky drop-shot here and there and loads of other Tennis terms that I’ll pretend I’m familiar with. Well, I do watch Wimbledon every year…

You can play in tournaments with three different cups against the CPU (although this was over very quickly) and in Freeplay mode, which is where you can also take on friends either online or offline with a variety of rule settings should you see fit. You can also turn all of the newfangled shenanigans off as well in simple mode, and play tennis, well, simply, if you see fit. It might make a welcome change from power-shotting your friends’ rackets all the time, which my 13-year-old said wasn’t fun. Or fair. I disagreed.

Also present in the game is Swing Mode, and Wii Sports aficionados may well find a lot to enjoy here, with the Joy-Con swung around like actual rackets. You’ll need to leave plenty of space, obviously and this mode was a huge amount of fun, although I seem to remember enjoying Wii Sports Tennis more. You’ll need to play the shots accurately – none of this random aiming stuff and you may find you’ll need a bit of practice finding your range. What was pretty cool in Swing Mode was the ability to challenge (in certain situations) the line calls, just like in real tennis. You get three challenges per game as you would in a Hawkeye situation and when prompted can see the replay, and occasionally see that a mistake was made. 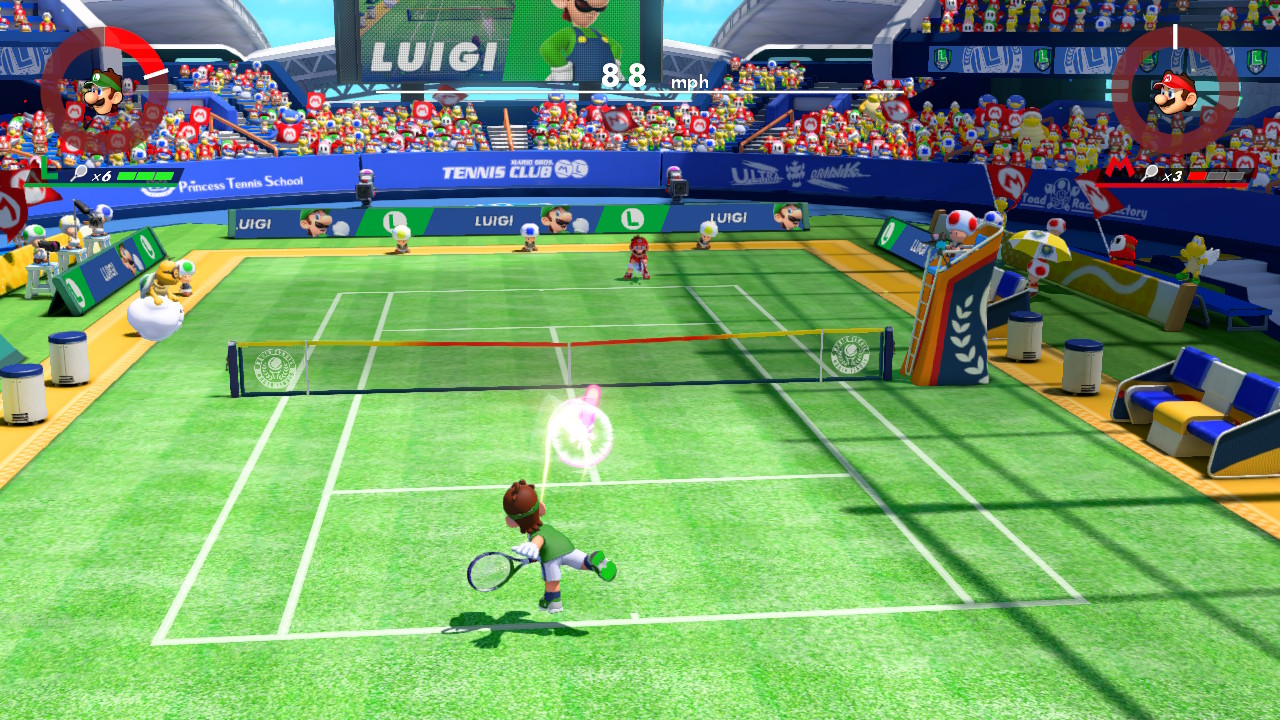 Mario Tennis Aces looks incredible, especially on the bigger screen. You start off with a few courses to play on, unlocking more through successfully completing the campaign, and some just look luscious – the forest ones in particular. Speaking of courses, many that you’ll unlock will bring about hazards and challenges; a ship has a mast which provides an obstacle for returning shots, the sand court really affects the ball’s movement and the forest has Piranha plants which swallow the ball and fire it off in random directions, which can be annoying if it aims where you aren’t…

So far, so good right? Well, yes and no. What’s here is actually rather light, despite being enjoyable and playing with friends will probably take a long time to get old – with a decent roster of differing character abilities you are bound to have a blast with friends and online for some time, but for single players what else is there? Ah yes, that Adventure mode.

Now, I’ve spent the last week playing Mario Tennis Aces, and this mode is easily one of the most frustrating and disappointing aspects of the game. You are tasked with completing a series of missions across a wide variety of environments, and the aim is to collect a set of magical stones, as seems to be popular these days. In order to do so, you’ll (naturally) have to engage in a few tennis matches against the games’ roster, as well as partaking in some challenges too. 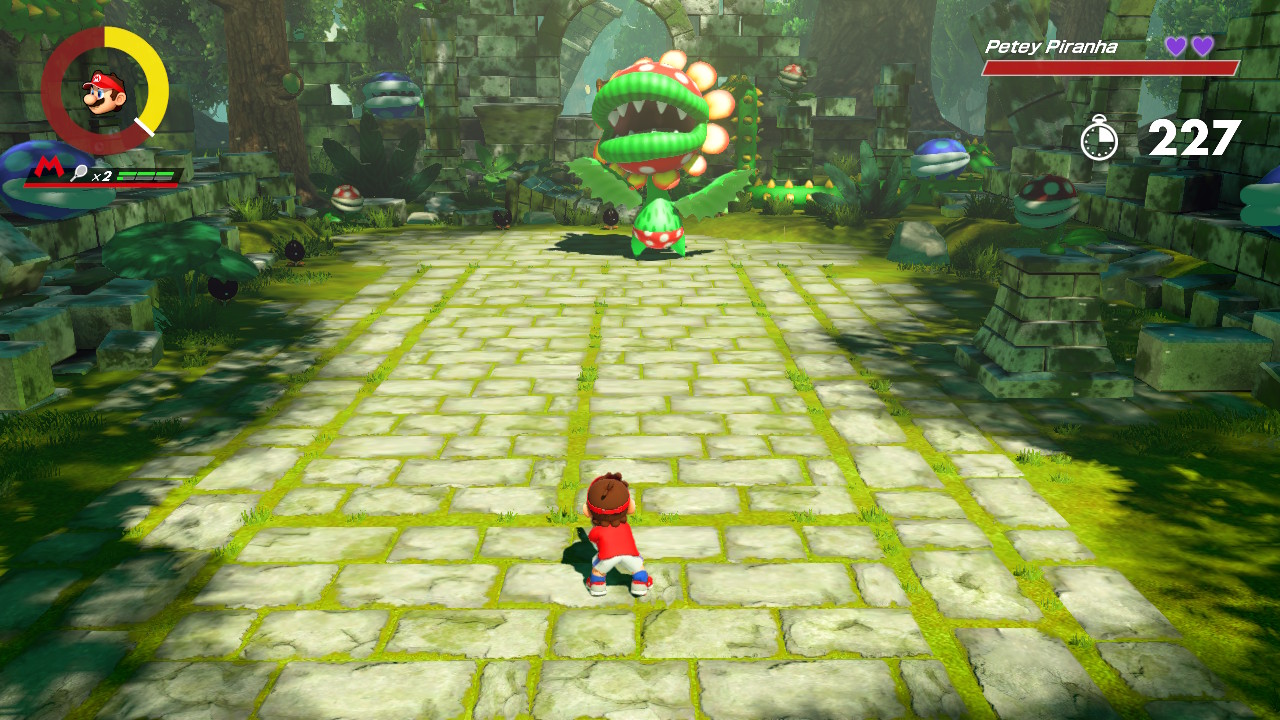 Whilst the tennis mechanics themselves are spot-on in the game, the Adventure mode itself was incredibly challenging, but not “get good” challenging. I honestly felt that it was, at times, infuriatingly difficult. Remember that energy meter? The opposition meter seems to charge much quicker than yours, enabling far more zone and star shots (not to mention specials) coming your way and whilst mastery of the block is a skill, it isn’t something that I could repeat on a regular basis. Ergo I lost. A lot. When I did win, I wasn’t exactly too sure why, especially in the challenges. And don’t get me started on characters who can swerve the ball inexplicably and randomly to the point where I couldn’t even return the shots. In the end, I gave up on it because it was resulting in me vocalising a few swear words and just ultimately wasn’t much fun. I love a challenge, and I love a game that develops and encourages me to get better. I don’t like something that just isn’t enjoyable and, despite a “sort-of” RPG style levelling system upgrading my stats (apparently), it just wasn’t rewarding as an experience to make me want to keep playing. Plus when you fail, you cannot easily restart the failed mission…

It’s a shame that Adventure mode’s much-touted return to the series is so disappointing, because it takes the gloss off of what is an otherwise polished and enjoyable tennis title, and something that the Switch was in much need of. It’s another typical party game that will probably see plenty of play, and with a bunch of friends and online you’ll certainly have a blast. Just don’t blame me if you throw your Joy-Con, either accidentally via Swing Mode or deliberately because of Adventure.

It plays a cracking game of tennis, both with simple mechanics or the enhanced ones and you’ll certainly have fun with friends. For the solo player, you’ll breeze through the tournaments with ease, though, and that Adventure mode is one of THE most infuriating gaming experiences I’ve ever encountered, which is a shame.