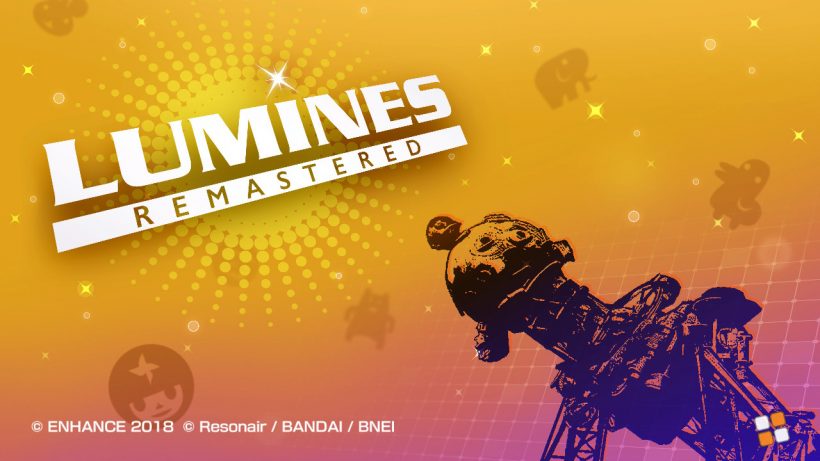 There may be a lot of choice when it comes to music games and puzzle games on the Switch, but how about the two combined? Well, that’s where this blast from the past comes in!

Lumines was originally a launch title for Playstation Portable, eventually spawning a number of sequels and ports. But considering creator Tetsuya Mizuguchi (the visionary behind classics like Rez and Space Channel 5) envisioned the game for the PSP, which he described as an ‘interactive Walkman’, it makes sense that the HD remaster for current-gen consoles is best suited for the Switch to play anytime, anywhere. 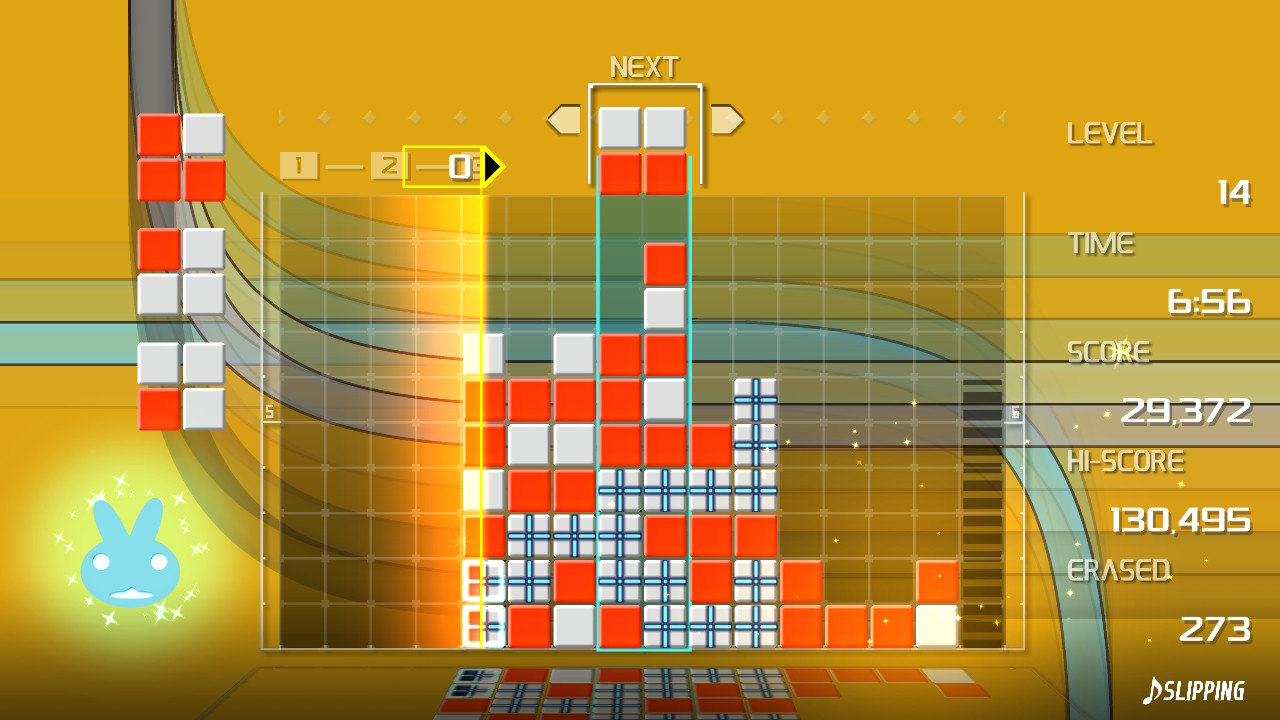 If you’re new to Lumines, it’s essentially a falling block puzzler in the vein of Tetris where you have to clear blocks with the game ending if it piles to the top of the screen. It’s much different in practice, not simply because you have a much wider screen to play with. You want to be grouping your colours into at least a 2×2 square but it actually takes a vertical line that’s constantly moving across the screen – almost like a metronome – to clear any coloured squares it passes. It’s not always about dropping blocks quickly but timing it so that you can group enough coloured squares before the line comes back, in the hopes of the blocks that cascade down also group together into a neat combo.

There’s something particularly rigid about only being able to use 2×2 blocks that makes building feel less tactical than say Tetris or Puyo Puyo but its depth gradually reveals itself once you get into the flow of it. Quite literally so as the music does affect gameplay. You don’t have levels but rather ‘skins’, a combination of both a track and the unique visuals you get. Tracks also have different tempos affecting the speed of the Time Line, a fast tempo giving you less time to build a combo whereas a slower tempo can be problematic when you’re stacked too high and impatiently waiting for your coloured blocks to clear. 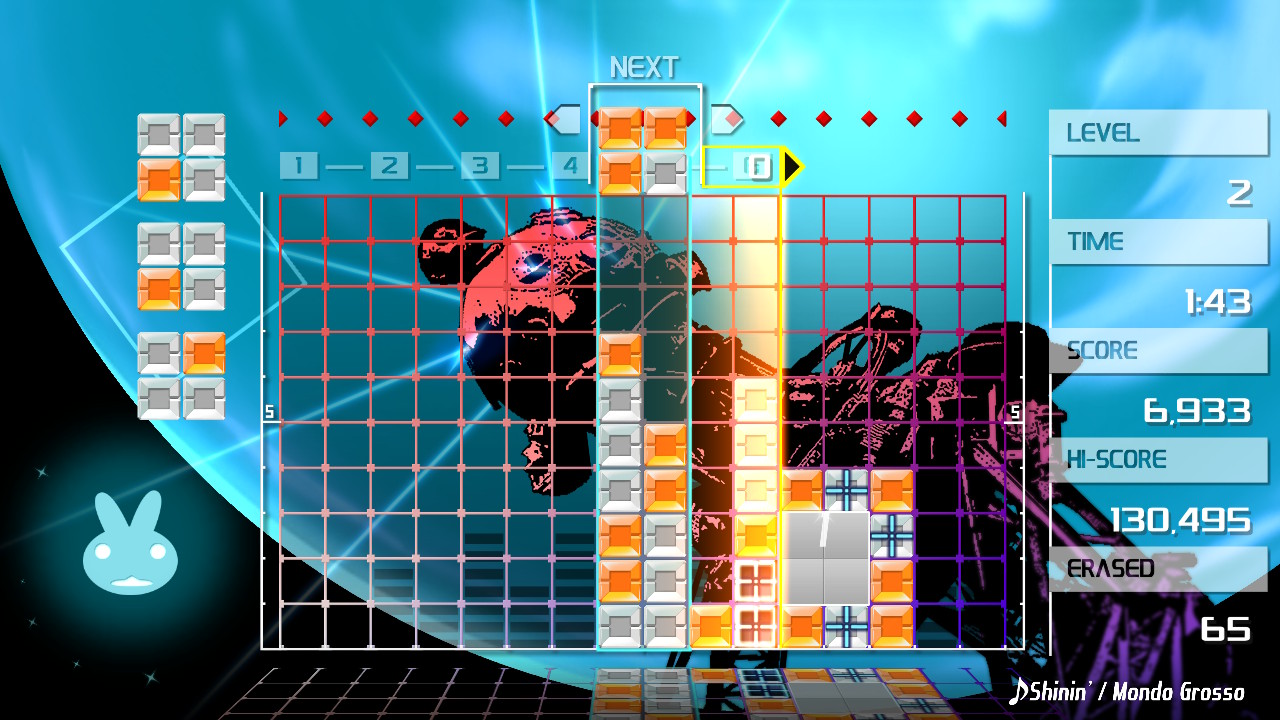 For longtime Lumines fans however, this is simply an HD remaster of the original game with no new skins or any of licensed tracks from subsequent games. But even if there’s sadly no tracks from The Chemical Brothers of Aphex Twin (the less said about Black Eyed Peas, the better) the original soundtrack created especially for the game remains a joy, including Mondo Grosso’s Shinin’. Other modes like puzzles, missions and even a competitive mode you can play against the AI or a friend feel too piecemeal, especially as the latter is only available in local multiplayer, with no online play planned. Ultimately, Lumines is meant as a solo experience where you can easily lose yourself in the puzzle and the music for as long as you can.

But the real reason to buy Lumines Remastered isn’t so much for the HD graphics but HD rumble. Mizuguchi has always wanted players to ‘feel the music’ and so a handheld console with haptic feedback finally achieves this. Not only that but the game also has a ‘Trance Vibration’ option letting you sync up to 8 Joy-Con to your Switch, which you can then place anywhere on your body to let you ‘feel’ the music as you play. Just be wary of hygiene depending where you decide to put them! 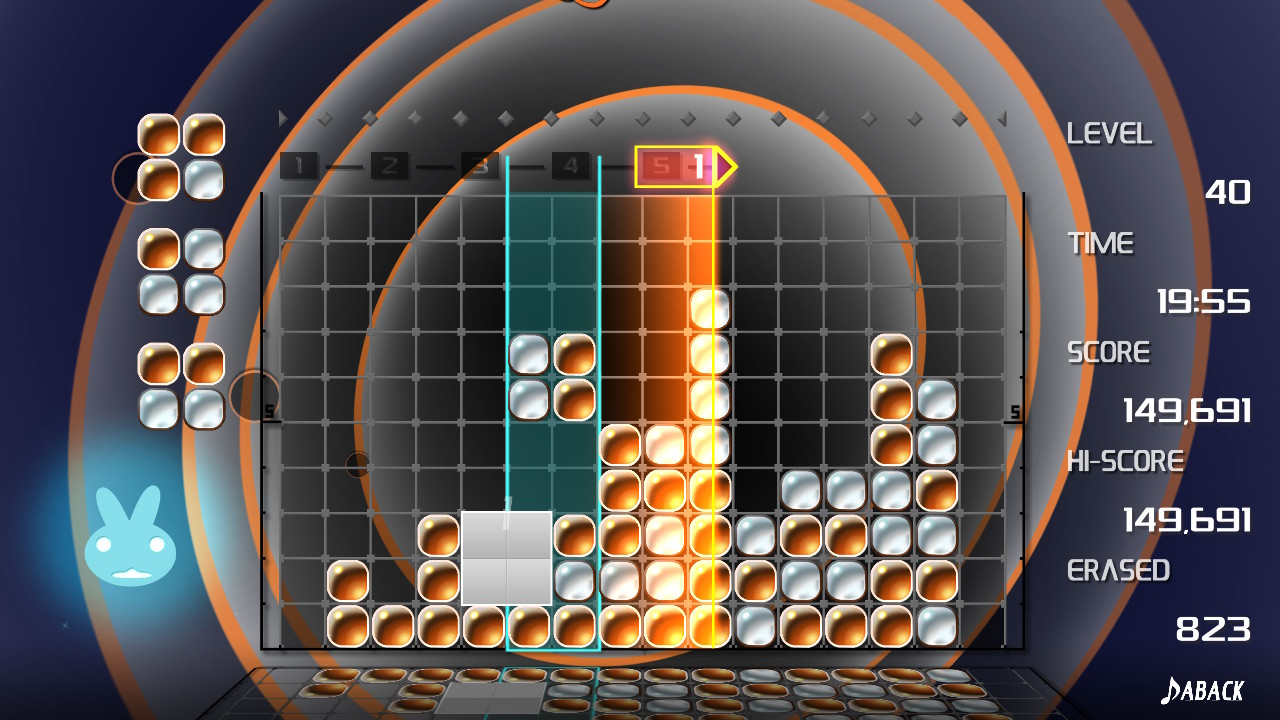 While it won’t scratch the itch for anyone looking for a competitive puzzler, there isn’t a music-based puzzler quite like Lumines Remastered so beautifully executed, and at an affordable price. The Trance Vibration gimmick you can take it or leave it, but you’ll still be able to bliss out regardless.