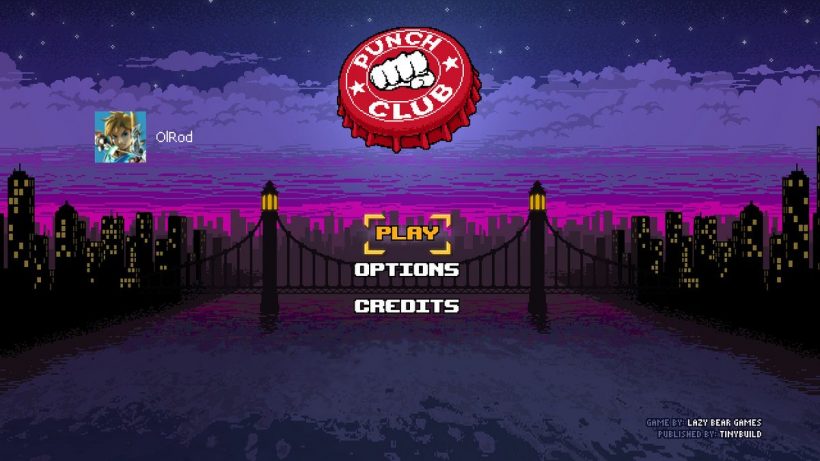 Go from dingy gyms to bright lights in this rags-to-riches sim.

With a name like this, Punch Club has got to be an all-guns-blazing beat-em-up, right? Actually, it’s not – it’s quite a way away from that.

This fighter management sim has you control a novice fighter with aspirations of becoming king of the brawling scene. There are a lot of sim elements at play here – you’ll mainly be carrying out tasks to boost your ring performance, like heading to the gym, for example, but you’ll also have to stay on top of your character’s happiness, hunger and tiredness. You’ll also need to go to work to generate the money to buy food, enter competitions and to get into the gym, but the great game-slower comes in the fact that your energy depletes while at work, and you sometimes won’t be able to complete work to the point where you get paid due to your energy meter running out.

That is an irritation. When things start to show a genuine threat of possibly picking up the pace, that’s stopped in its tracks by having to return home to eat or sleep, then finding you’ve not actually got the money to purchase any more food. These are the sort of problems I find myself having in my real life, but when I play games for joy and escapism, this really isn’t what I’m looking for. I do acknowledge that there are some out there who take great player in the micro-management of this kind, however.

The actual fighting element, though, isn’t what you probably think it will be. From the moment the fight starts, you’re no longer in control – it’s all about training up your stats ahead of the fight and then adding the correct booster cards at the start of the fight, then it’s entirely carried out automatically as a sim. It’s quite an unusual way for things to be done, especially in a game named Punch Club.

And you can’t fight on any given day, either. The game works on a day-by-day basis (not in real-time), and on only some of those will tournaments and underground MMA club meets take place. You’ll need to remember to visit the menu to register your attendance for these events in the days leading up to them, and that again can be a frustration when you’re just hoping the excitement will go up a notch.

All the while, though, there’s a separate story element going on, where you act as a crimefighter and take on the weird and wacky criminals of the underworld. There are crocodile-men to fight in the sewers, men in animal masks robbing convenience stores and all sorts of other things you’ll need to intervene in for big stats and monetary boosts, and these activate as you rank up and build up your performance level in the fighting competitions.

It depends how much time you have in your life to dedicate to a title such as this. The game is a constant balancing act between all of the attributes of your character, and you can feel like every action you perform is like stamping down with two feet on one side of the weighing scales, requiring days of recovery work in order to atone for. I’d have just liked to have felt a little more excited.

Punch Club is one which you need to be committed to in order to get enjoyment out of it. It’s slow and plodding and lacking of the desired amount of excitement, but there is satisfaction in figuring out the system and making your way up the ranks.