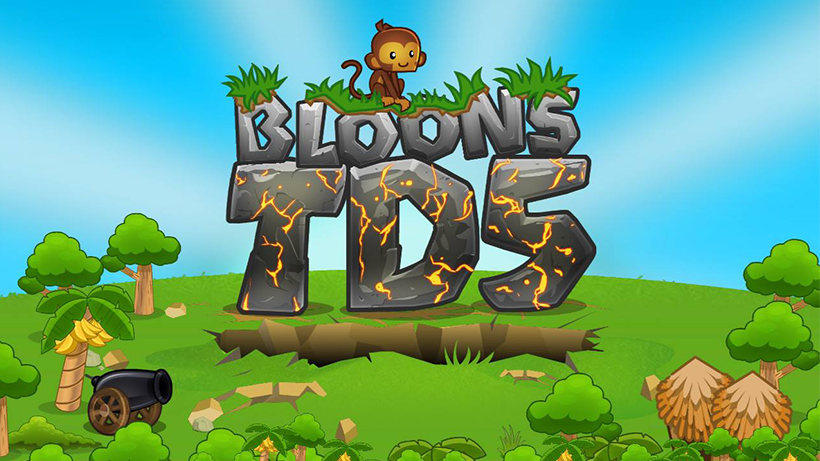 Bloons TD 5 throws you into the age old war between monkeys and bloons (see: balloons) and no, I did not make any of that up. In this game you’ll organise your own monkey army, from ninjas to super powered monkeys, you’ll utilise your monkeys to defeat an incoming horde of floating bloons. It plays like a tower defence game, wave after wave of deadly bloons will follow a set path and you can place your monkeys (towers) along the track to defeat them and save the day. With such a simple idea it is truly amazing how much depth and nuance Ninja Kiwi have managed to squeeze out, this has evolved far beyond its flash game roots and is genuinely a fantastic strategic experience at home on the Switch. 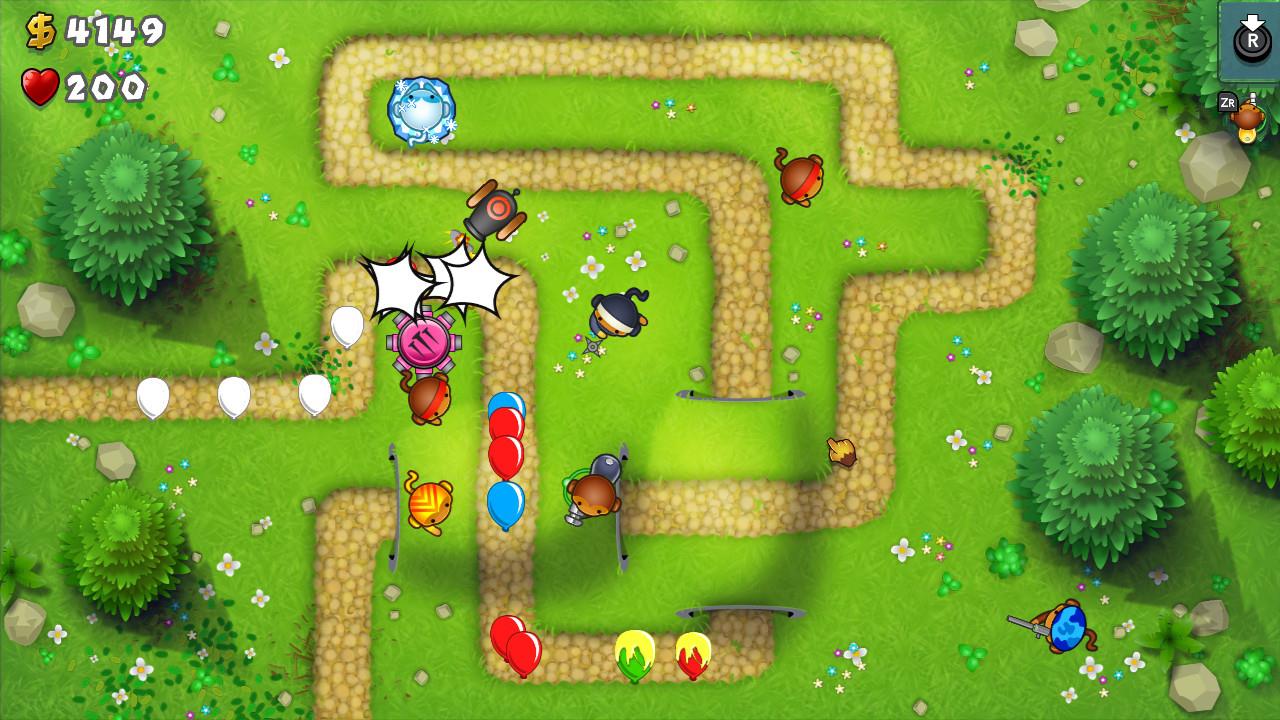 You’ll start the game with a small amount of cash to start building your army and as you slowly pop bloons you’ll gain more cash to splash on even more powerful monkeys and upgrades. Tower defence games can live and die by their arsenal, the towers need to be interesting and fun but also strategically important, a player should know what is useful and when to use it. Thankfully Bloons TD 5 has this in spades, there are dozens of monkeys to choose from, each with their own strengths and weaknesses – for example the ninja monkey can target camouflaged bloons where as the cannon tower can take down the armoured lead bloons. There’s plenty of choice but as you keep playing you’ll find some towers are just more useful than others, it’s not until you dive into the challenges that you’ll really be pushed to utilise every upgrade on every tower. 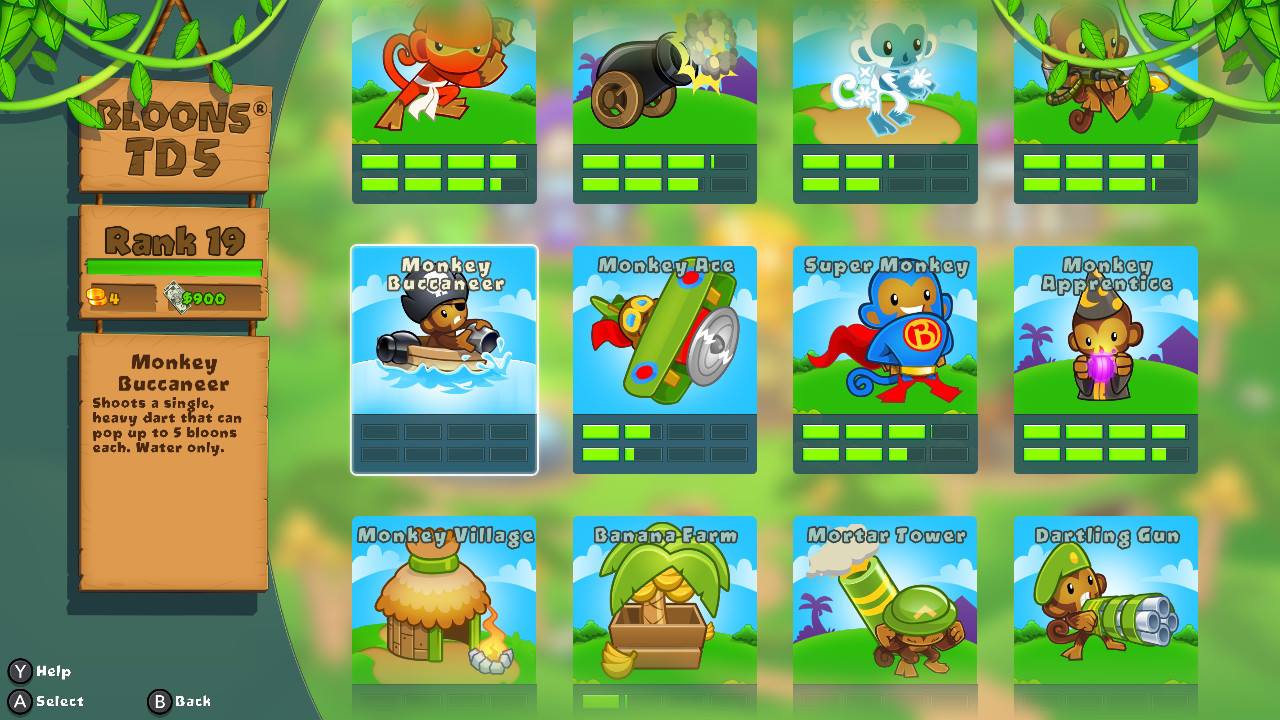 Each tower even has its own upgrade tree allowing it to gain new abilities and turn into bloon massacring demi-gods. Learning these upgrades is key to mastering the game, knowing when you need a new monkey versus upgrading one of your current lot to be a more efficient popper is a great deal of fun to figure out. On top of all this, the game layers on a higher level of upgrades, you can purchase buildings that’ll bestow additional passive upgrades for a certain tower type. Having the boomerang dojo lets your boomerang monkeys throw an additional boomerang, doubling the firepower. It’s all these small nuances that add up to a surprisingly deep experience. The other core pillar of any tower defence game are the maps – again this game delivers a vast amount of choice and all of them provide their own kind of challenge. The easier maps will often given you plenty of winding paths giving you the maximum time to take down the bloons but as you progress things get more complex with multiple routes to defend at once or maps with too much water requiring the use of the sea worthy pirate ships. There’s more than enough diversity to keep it interesting and the tracks ramp up in difficulty sensibly, you’ll have more than enough time to test out various towers on the beginner tracks before working your way up to the extreme maps later on. 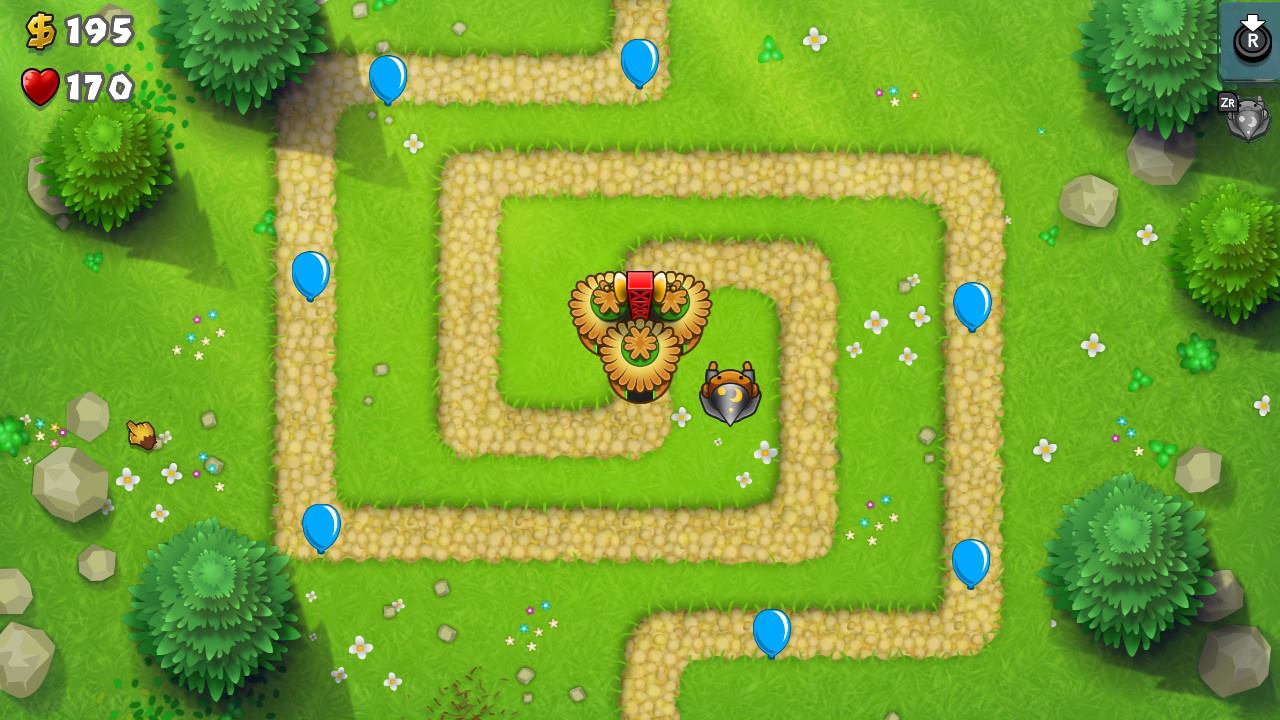 On top of the dozens of stages and army of monkeys to upgrade there’s also a plethora of modes to try out, from the fun challenge maps with special restrictions to the endurance style odyssey mode requiring you to beat several stages with one set of lives. There’s something for every mood and plenty of variance in how to challenge the player, the challenge maps especially get the player to think out of the box by forcing you to use towers you’re not familiar with. Every time you feel like you’ve got a grasp on the game, it finds new ways to challenge you. If you wanted to take on the bloons with a friend then the game also has you covered on that front too, the game features both local and online co-op where the map is divided in half and you need to work together to get through the fight.

The cartoony visuals really lean into the crazy monkey vs bloon premise, the bright coloured bloons highlight the strengths of any given bloon at a quick glance. As the rounds progress though things can get hectic onscreen and it all just becomes a really colourful blur. The towers themselves bring just as much fun style to the table, they gradually change as you level them up, the humble dart monkey goes from pub darts player to badass with a catapult. It’s fun to see all the different towers and as the game goes on you gradually build up from a lone monkey to a wall of defences with impressive firepower. 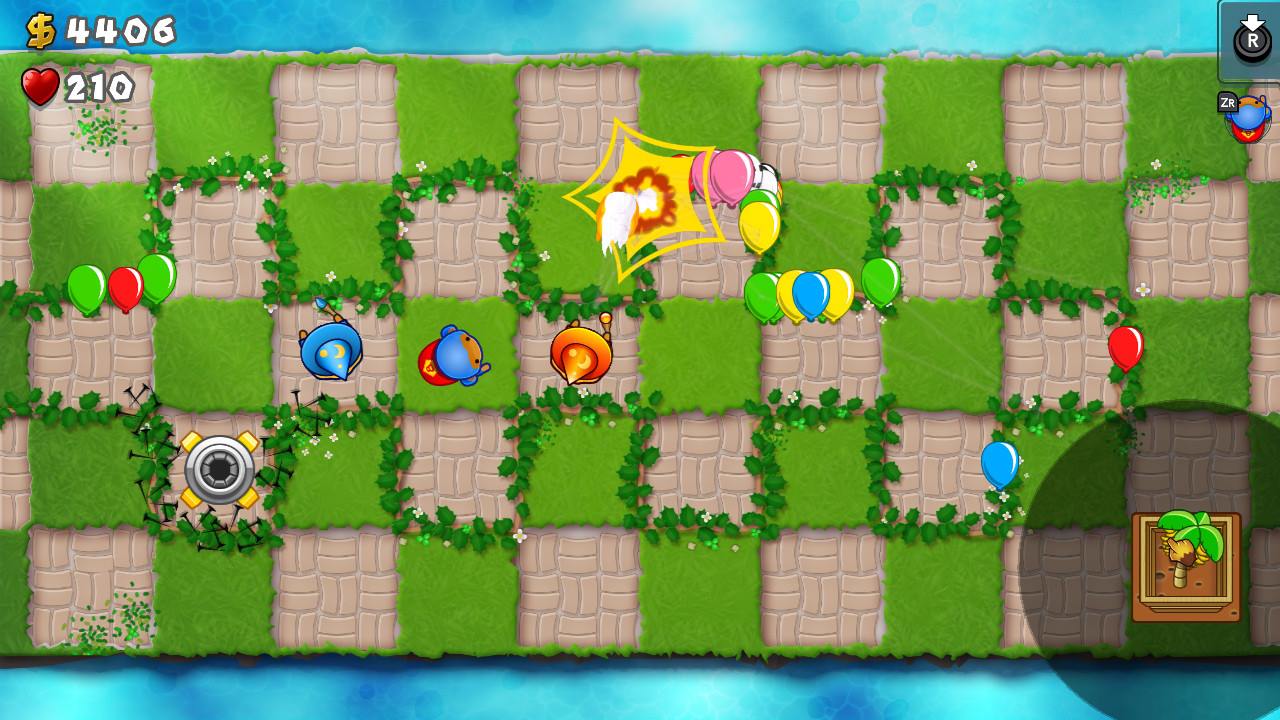 All this isn’t to say the game is not without fault. The controls can be a little awkward, the cursor often flies across the screen and the option to slow it down grinds things to a halt, there doesn’t seem to be a happy medium, it’s mostly only a problem if things get a little sketchy and you need to place down tacks or bombs in a rush. Perhaps the bigger oversight though is the lack of touch screen controls, given the games presence on mobile it seems strange that touch controls weren’t translated over to the Switch.

Bloons TD 5 is the culmination of many years spent refining the tower defence genre and the results speak for themselves. This game offers a tonne of content, deep strategic gameplay and all wrapped in a fun monkey vs bloon war setting. It’s crazy but it somehow works. For those wanting something to get the brain juices flowing then this game offers plenty to dig into, whether you’re a master tactician or you still struggle with tic-tac-toe the game has something to offer you.

Bloons TD 5 is possibly the pinnacle of what tower defence games can offer, with tonnes of content, deep gameplay and more ways to play than you’ll ever get through, there’s something here for anyone even remotely interested in the tower defence genre.