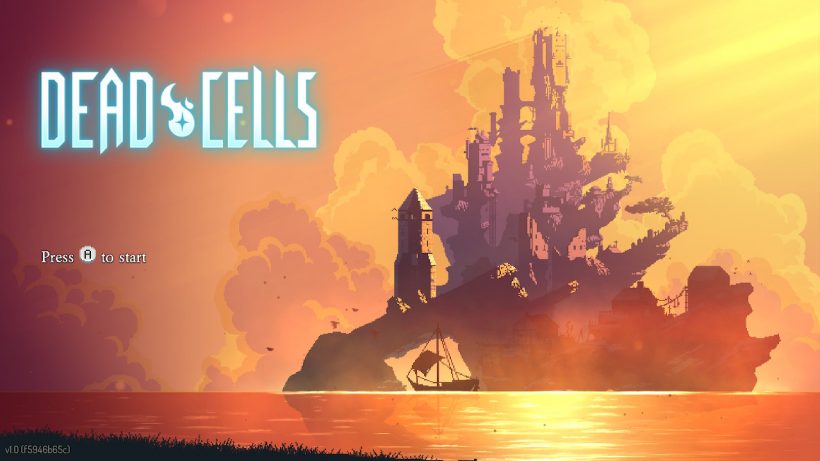 We’ve come to a point where the word ‘roguelike’ in a game’s description doesn’t give the same good impressions anymore. Due to the huge amount of indie games that are build with roguelike elements nowadays – some with very dubious quality, I’d say – people tend to turn away from the subgenre. On a whole different spectrum, though, metroidvania games have a much better public appreciation. They’re often praised for their handcrafted map layout, with many secrets and power ups to be found – a clear contrast from roguelike’s procedural generated levels. Enters Dead Cells, a game that proposes to mix elements from these two genres in a cohesive and entertaining way. Surprisingly, one that excels in that. 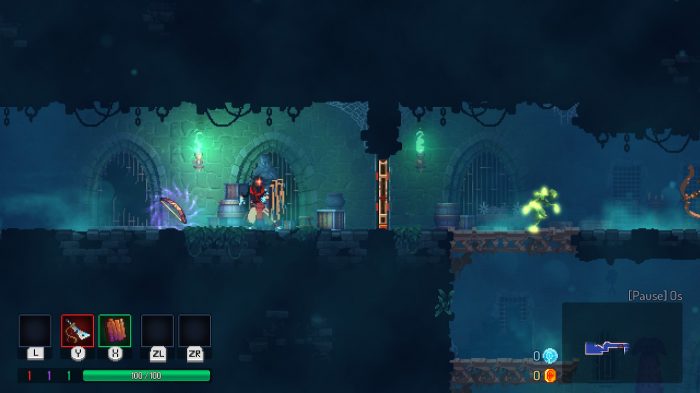 The game’s basic premise is equally odd and simple. The first impression is that you control a ninja-like humanoid during the whole game. However, you learn by the starting animation at each run that you are, in fact, a kind of sentient blob that possesses dead bodies. Odd. What exactly you are (and what is happening to the island you’re in) is a mystery at first, but every time you die, you go back to the first area, ready to explore again. Simple. In a similar manner to Dark Souls – one of the many Dead Cells influences, as we’ll see –, more detailed information about the world’s past is told by environmental elements. You see a big imposing statue, or find a hidden secret room, and a new piece of lore is unveiled. It is up to the player to find its deeper meaning.

This die-and-repeat loop is where most of Dead Cells’ roguelike elements are present. A full playthrough will take up to an hour, but you’ll spend a long, long time before being able to fulfill that (unless you’re a much more skilled player than I am). The campaign is formed by many different named levels, some of which you can access in different order, depending on how much time you spend exploring, and which skills you current own. While you’re able to expect what to find at each level – there are certain enemies unique to some areas, for example – the entire layout of the map, including weapons, upgrades and enemy disposition, is entirely random. 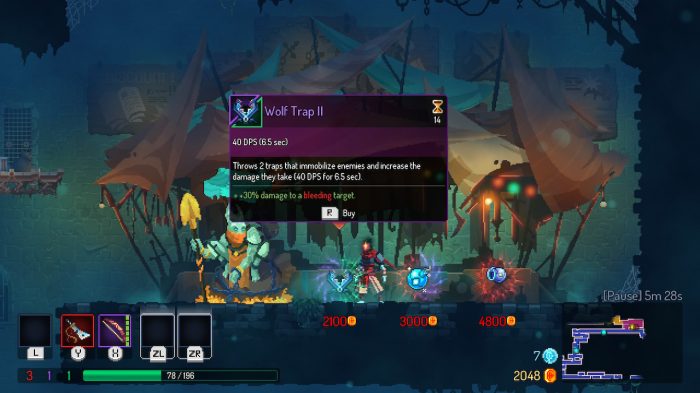 Dead Cells isn’t a ‘full roguelike’, though. Despite featuring a permadeath system, there are many things that you can keep between your runs. There are two distinct currencies in the game: gold and the titular dead cells. Every single enemy you kill drops gold, and you can use it on stores to buy better weapons or health items. If you die, though, you lose it all. The dead cells, on other hand, are used to buy permanent unlockables from a special vendor. The catch is that you only find these guys on a special area you cross between levels. In order to unlock even more options to buy, you also need to find equipment blueprints to bring them to these vendors. So, you’re constantly measuring the risks of keeping exploring for more dead cells, at the expense of losing all your current progress.

In addition to these purchasable permanent upgrades, Dead Cells also features some Metroidvania elements, thanks to its rune system. At the very beginning, your character already has quite the array of movement options. You’re fast, you can dodge and double jump. However, certain paths are locked behind certain skills, such as wall-jumping. In order to unlock these skills, you must explore certain levels and defeat their sub-bosses. Regardless of not having the same number of movement upgrades of a standard Metroidvania, it is still impressive how much your way of exploring each level changes when you acquire each new rune. 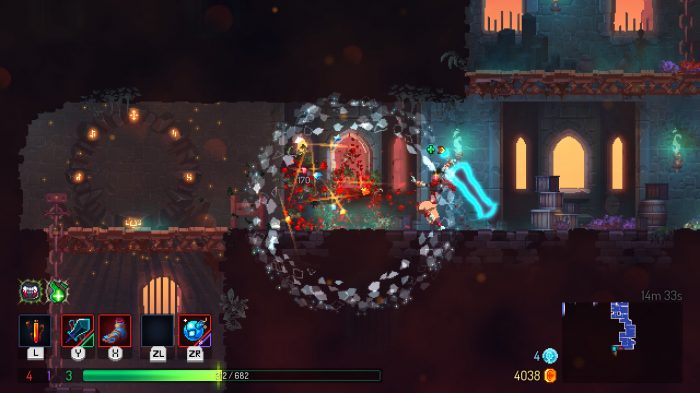 What is more impressive than anything in Dead Cells, though, is its superb fast-paced combat mechanics. Here you’ll find more influences from Dark Souls. Not because the combat is hard and implacable (although it can be, at times), but because it demands a certain cadence; the player must approach each enemy carefully, using all the tools at your disposal, including the map layout and enemy positioning. The better thing here is that almost every single weapon and equipment seems to be equally viable and powerful. On this regard, you can equip a primary (Y) and secondary (X) weapon, in addition to two skills (ZL and ZR), which include things like traps, bombs and spells. If at first you start with a sword and a shield (or bow), you’re constantly changing your gear to spears, hammers and many others. Cutting your enemies in half with a giant sword is equally satisfying to smashing them to bits with a hammer, or piercing them into a wall with a pole. Parrying an enemy arrow back to the sender is even better. The combat is that good.

This whole carnage is presented with a very pleasant pixel art style that mixes up fantasy and cyberpunk elements. At a same screen, you may see a normal medieval archer fighting side-to-side with a zombie with glowing green skin. Or a swordsman with a Japanese hat with a guy with a neon spiky shell. Well… things tend to go crazier from there. While the characters are made with 3D models, you won’t notice it thanks to an amazing art direction, which blends it perfect with the pixel art of the awe-inspiring background landscapes. Unfortunately, the game soundtrack isn’t on par with these visuals. Don’t misunderstand me. It isn’t bad at all. It just isn’t as remarkable as everything else. 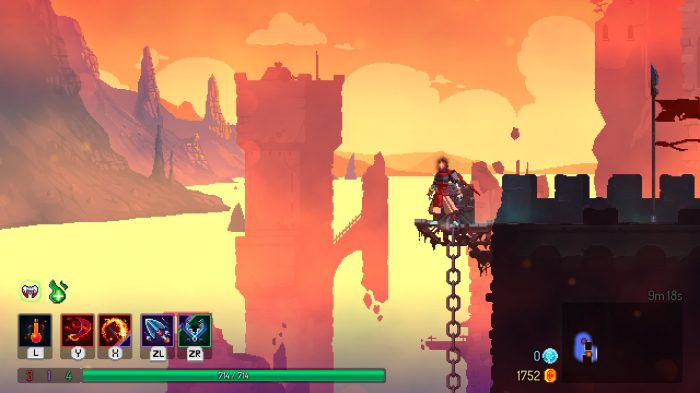 Thanks to the combination of this top-notch presentation and one of the best 2D platform combats I’ve ever played, Dead Cells become one of the best indie games of 2018 – one of those that simply fits better on Switch. Adds to that the mixture of metroidvania and roguelike elements, and you’ll have a game to always go back to.

Dead Cells is a game of many influences. As a child of roguelikes, metroidvanias, and souls-like games, it mixture many elements in a surprisingly cohesive and entertaining way. Thanks to one of the most satisfying sidescrolling combats and extensive replayability, it is a game that every Switch owner should play and keep playing.