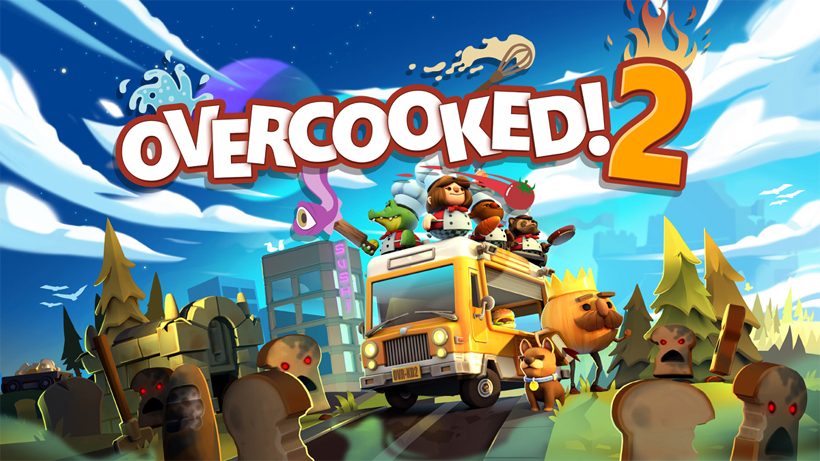 Who knew cooking with friends could be so much fun. And cause so much fire…

The ever-popular multiplayer cooking videogame is backed once again with a follow up that turns the heat up on the action. Following on from the first title, Overcooked 2 asks players to once again put on their chef hat and help to undo a horrible mess that has led to the rise of The Unbread. With knifes and fire extinguishers at the ready, what is the worst that could happen in the kitchen?

Overcooked 2 gives players a rather simple set of controls but asks them to complete complex recipes using those inputs. To make matters harder each kitchen has a unique design and twist on the gameplay which keeps the experience fresh and challenging. This means players go from cooking a simple, one ingredient dish in an open plan kitchen to rushing around with multi-step recipes on a hot air balloon which then crashes into a sushi restaurant halfway through the level.

Speaking of which, Overcooked 2 takes the idea of changing stages and leverages it to new creative heights. Stages don’t just move around and change, each one is alive and full of character. Learning to make the dishes is one thing but managing the environments is another skill altogether. Throw in the time limit and stars to unlock through points and you have a recipe for some stressful but gosh damn enjoyable gameplay.

The strength of the title comes from building on the already tried-and-tested core gameplay of the first, seeing improvements and features added across the board. Movement is more fluid, handling items and now throwing them is tighter and the general feel of the gameplay is on point. Not to mention the many new stages, story and endless repayable value.

Thanks to featuring local, online and wireless multiplayer options, the Switch version of Overcooked 2 makes it easier than ever to get your friends playing together. Sadly though, online play is not a completely smooth ride. Lag was an issue when playing even over solid internet connections and the lack of voice chat impacts the experience. It’s nice to be included but to be honest, communication is key in Overcooked 2 so local or wireless play would be a better choice. Even with the noticeable lag during online play and some drop frames in the chef select screen, the rest of the experience holds up rather well. Short load times, responsive controls, fluid action and top tier presentation ensure all players have a brilliant time.

So where does this leave Overcooked 2? Well, other than the mentioned performance hit in character select, the Switch release is solid. With multiplayer supported in so many ways and countless hours of fun to be had, the title is a worthwhile sequel to an already brilliant videogame. The core formula is refined and polished with plenty of new surprises to keep you wanting more. It might test the patience of your friendships but if you are all still talking by the end of the journey then good job.

Overcooked 2 is a brilliant and chaotic title that should be the standard of multiplayer gaming experiences that developers aim for now, not just on Switch, but across all platforms. Do yourself a favor and pick up Overcooked 2 today and spend some fun, cooking filled hours with your friends.

Overcooked 2 is a chaotic, intense, and challenging multiplayer experience that is so brilliant that it offers countless hours of enjoyment that should be played by everyone. Grab some friends and get ready to cook!