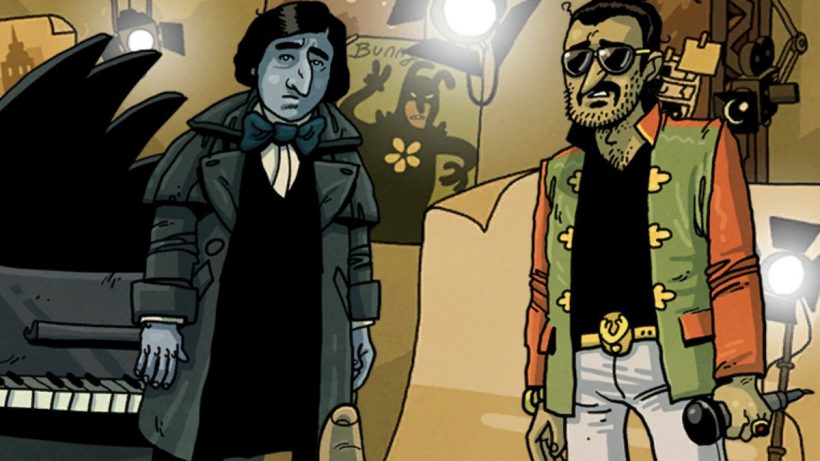 Is this Frederic in harmony with the first?

I’m fairly certain that everyone of a certain age (probably 21) and above and of a reasonably sanity will share my own views regarding how terrible modern music is. Whether it’s any of the tone-deaf nonsense that Drake puts out, which seems to be snapped up by everyone with a camera on social media, to whatever rubbish boyband is doing the rounds, everything just seems so much worse than it used to be. The Frederic series of games are all about that feeling.

Frederic 2: Evil Strikes Back is a sequel offering more of the same from the first game – quite literally. Chopin has swapped his grand piano for a keytar, but the only new additions are ten or so new songs and a new wacky story which sees Chopin face off against more enemies designed to look loosely like either famous musicians or stereotypical professions and ethnicities. Freddie Mercury and Michael Jackson-inspired characters are present and correct, while you can also take on a dancing Russian, a weird Kiss tribute band and a late boss duel with Lady Gaga. Taking all of these guys on through the medium of piano battles while playing as a nineteenth century Polish composer is, once again, the maddest plotline you’re ever likely to find in the Switch’s library.

This time, Frederic is heading on a worldwide journey in search of his heart, which involves a cartoon story which meanders from one caricature to the next, with the plot very, very loosely explaining why Frederic has to travel the world once again. While the writing, the voice acting and the delivery are some way over the border to being annoying, you’re going to want to watch them, as otherwise you’ll be getting very little gametime for your purchase. The game runs under an hour if you nail each of the songs first time and watch all of the cut-scenes, and it isn’t hard to play the songs well if you’ve already had the chance to master the first game.

The gameplay is largely the same, though the difficulty is ramped up a bit with blends of two notes at the same time to watch out for. There are also one or two sections of the later songs in the game which will require you to hover both hands over the Switch’s touch screen in order to play the piano more like in real life – the notes come thick and fast, and you have no hope of hitting them all just using one hand like you could in the first game.

As such, this entry in the Frederic series gives the player a much stronger feeling that they are actually playing the piano – but this being a rhythm game, the notes are not actually assigned to the correct keys, it’s disappointing to find out. For players with a background in actual piano playing, that can prove a little confusing – as songs repeat themselves, you find yourself wanting to play the notes from memory in the bid to play more fluently for a better score.

If you enjoyed the first game, you can come back for more with this, particularly when you can pick up both games for less than a fiver in the eShop sale. There’s not an improvement enough to warrant selecting this game over the first – that’s where you should start the Frederic story.

Frederic 2 offers more of the same from the first game. It’s nice to have them both on Switch, and at an affordable rate given the sale price. They’re both short games, though, so a bundle would be welcome.