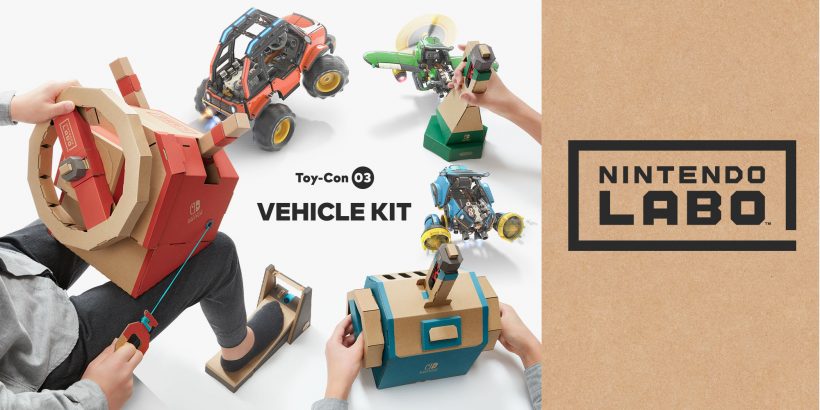 More cardboard for your games room

The sheer ingenuity and accessibility of Nintendo Labo cannot be overstated. When it initially released back in April 2018, it was met with a decidedly muted response from the gaming community – seriously, they’re charging how much for bits of cardboard?! – but when you actually lay your hands on the different kits available, its appeal becomes clear as day. It’s clever, charming and deceptively complex.

That said, my own personal experience with the new Labo release, Toy-Con 3 – Vehicle Kit, was a bit of a mixed bag. I had tremendous fun building the new cardboard sets included, but actually using them within the games included proved to be a frustrating, repetitive and altogether boring experience. But then again, I’m fully aware that these games simply aren’t for me – I am pushing 30, after all.

When you open up the hefty packaging, you’ll find the game box itself along with several pieces of cardboard (about A2 size – though a couple of them are folded in half and may be closer to A1 size), all of which are colour-coded for the vehicle type they relate to, along with a little icon in the top left corner to further indicate the vehicle. It also comes with a little pack containing elastic bands, marker stickers and more.

The game initially eases you into the building process by allowing you to make a Joy-Con holder – think of it as a kind of practice run before you get into the real thing. Straight away, it’s clear that the instructions available via the Switch’s screen are truly remarkable. You progress through the instructions by pressing and holding the ‘forward’ button on-screen, and you can also drag this to the right in order to speed things along a bit quicker. Each step is presented clearly, showing you exactly where to fold and in which direction, followed by an animated sequence displaying the cardboard folds inserting into one another.

To accompany this, each step includes text to aid you even further, but to be honest I didn’t pay too much attention to this (I am a visual learner, so I’m told). You can also drag your finger along the screen to rotate the image displayed, so if you’re confused at any point, you can take a closer peek at what you need to do. Naturally, the game also allows you to go backwards a few steps if you happen to make any mistakes.

The first main vehicle you’ll likely make is the car steering wheel and pedal, since these are the first cardboard pieces you’ll come across. The steering wheel itself is surprisingly complex, containing multiple parts that eventually come together to form one fully functional ‘machine’, complete with levers and other bits and bobs to use during gameplay. You also need to build the pedal, which functions remarkably well with the simple inclusion of an elastic band – you simply press it down with your foot and it springs right back up again. Keep in mind too, that the pedal is also utilised with the aeroplane vehicle.

Actually using the steering wheel during gameplay invokes a feeling akin to using the Wii Remote for the first time. It’s a cardboard contraption, but it genuinely works. You press down on the pedal with your foot and steer left or right with the wheel (which may sound ludicrous to adults who actually drive real cars, but for kids this will likely be the first time they’ve ever experienced something quite like the real thing), and you can pull a lever on the left hand side to reverse. On top, you’ll also find two more levers, and these activate tools on the left and right side of the car respectively. There’s a circular saw to cut down trees, a catapult to fling bombs in front of you, and more. It’s a neat idea, but the novelty wears thin very quickly.

In fact, all of the vehicles included feel great at first, and it’s genuinely remarkable that they work so well, but for a guy my age with no kids, I quickly lost interest once I got over the initial novelty. That’s not just my own personal preference, either – I think anyone who tries this game will soon see that there’s actually very little to do once you’ve built all the vehicles.

The main chunk of the game is the ‘Adventure’ mode, and it’s a kind of open-world playground for you to explore at your leisure. It’s broken up into sections depicting various themes, from an idyllic lake to Egyptian pyramids to a modern city filled with skyscrapers. Its size is reasonably impressive, and there are also a number of missions dotted around the map (for example, burst a certain number of balloons floating around, or escort some NPCs to the nearest gas station) for you to partake in.

Speaking of gas stations, the game bizarrely forces you to refill your tank of gas if you drive around for lengthy periods of time. Granted, it takes a while for the meter to run dry, but it’s just a completely unnecessary addition to the gameplay, and one that I believe was simply shoehorned in to make better use of the Toy-Con itself.

Other than the steering wheel, the package contains a flight stick for control of an aircraft, and a circular contraption used to control a submarine. Again, I had a great time building these (the flight stick didn’t take very long to build, which is slightly disappointing), but much like the car, actually controlling these vehicles becomes flat out boring. I do feel rather conflicted with the overall package, because it quite clearly an impressive idea, and it does have the potential to be expanded into proper full length games (part of the Variety Pack has been made available to use on Mario Kart 8 Deluxe), but as it is, it’s just such a shallow experience and I can’t imagine even kids would spend a great deal of time with it once the building aspect has been completed.

I only hope Nintendo perseveres with Labo, because the potential is there, but they haven’t quite reached it yet.

Nintendo Labo: Toy-Con 3 – Vehicle Kit is undoubtedly a clever idea that genuinely works. Sadly, once you’ve gotten past the actual building stage of the game, you’ll find there’s precious little to keep you occupied for long.