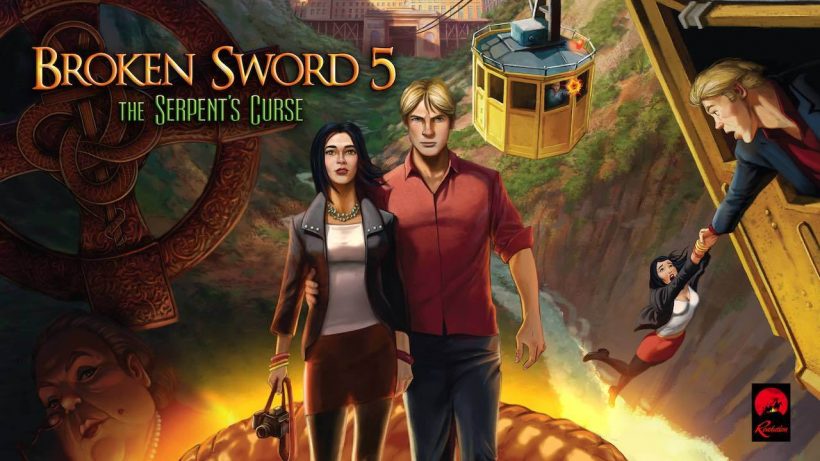 Murder in the art world.

The Switch is becoming quite a little home for adventure games, with the likes of The Wardrobe, Thimbleweed Park and The Inner World releasing in fairly close proximity to one another. With so much to choose from, Broken Sword 5: The Serpent’s Curse needs to be extra special in order to stand out. As it is, it’s a perfectly okay adventure title that sadly falls way short of being a modern classic.

A little caveat before we get into things: this is the first Broken Sword game I’ve played, so I’ll be reviewing it purely on its own terms. Please bear in mind though that if you’re a fan of the series, you may get a lot more out of the jokes and references made throughout.

Broken Sword 5 starts off with our intrepid heroes hanging out in a lovely, quaint Parisian art dealership. A pizza delivery man enters and suddenly whips out a gun, taking out the gallery owner before stealing a rather valuable piece of art. So starts a rather long-winded investigation process, one firmly grounded in retro gameplay tropes.

With each scenario that comes, you simply move the camera around with the right analogue stick, and move a cursor with the left in order to examine various objects and interact with the NPCs (though you can use the Switch’s touch screen too, if you wish). So much of the scenery is basically useless, and it’s only through trial and error that you’ll eventually come across something that might help you. Thankfully, as with many adventure games of this nature, you can pop into the pause menu and check out the game’s hint system if you’re struggling (although rather than gently nudging you in the right direction, these ‘hints’ basically just tell you exactly what you need to do).

I have to admit that whilst the gameplay itself leaves much to be desired (why do the characters move so slow?), the characters themselves were pretty delightful and spurred me on to keep going. I particularly enjoyed chatting to an elderly police officer whose dedication to guarding a crime scene is admirable. However, talking to certain people is necessary to solving particular puzzles, so don’t be surprised if you hear the same lines of dialogue multiple times whilst you figure out what to do. Furthermore, the game actually forces you at some points to exhaust all possible dialogue options with a character in order to open new ones that further the plot. It’s needlessly lengthy, and I found myself losing interest rather quickly.

Broken Sword 5 undoubtedly looks absolutely stunning. The scenery bursts with colour and the characters themselves are so well designed – it genuinely looks like an animated movie. That is, until people start moving around – the animation in this game is stiff at the best of times, and it’s really a shame because it conflicts with the overall visual aesthetic so much. Thankfully, however, the voice-over work is pretty decent for the most part, and quite frankly I doubt you’d be interested in playing this kind of game for its technical prowess.

As it is, Broken Sword 5 is a classic point-and click adventure through and through. It feels both new and old at the same time, thanks to the lovely visuals and clunky gameplay. Fans will no doubt love it, but newcomers may want to look elsewhere.

Broken Sword 5: The Serpent’s Curse is a decent adventure title that fans of the series will no doubt appreciate. It looks gorgeous, but clunky, long winded gameplay design holds it back from greatness.