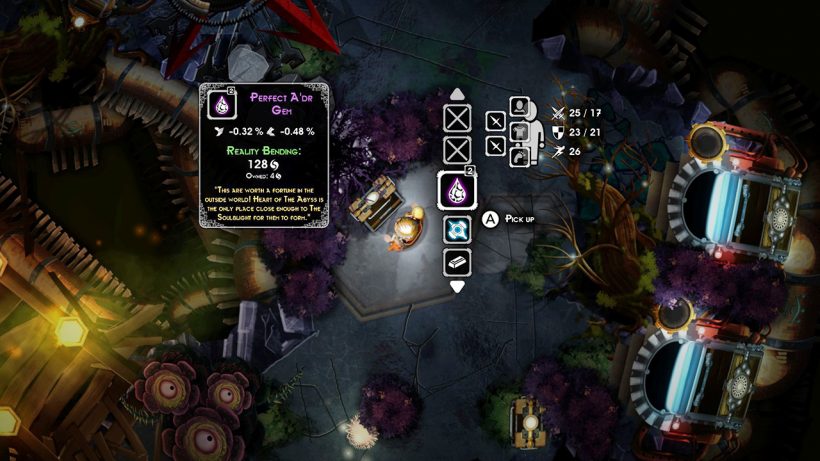 Dumped into a deep crowd of roguelikes on the Switch eShop, things were always going to be tough for Soulblight.

The story of Soulblight goes that the Soul Tree, which gave birth to and raised a man who built a sanctuary around the tree. Hidden from the world, the tree began to wither, and with the tree succumbing to disease, plague ran through the land. The adventurer must come to wash away the blight. It’s fair enough for a background, but it has next to zero effect on the majority of the actual action of the gameplay.

As a way of making itself stand out, the game’s unique feature is tainting, which affects your tactics employed on your playthrough, and which can be selected before the start of each level run. For example, you might be offered the Cowardly approach, which rewards for assassinating enemies and for sparing them too, but penalises for killing enemies in open combat. The Hypochondriac option, meanwhile, makes sustaining injuries all the more agonising by first raising your synergy and then penalising you heavily for getting hurt, as you can’t make use of healing items as efficiently as you would normally as a result of your condition.

Add factors like tiredness, drunkenness and your approach to small animals that you find in chests into the formula – all of which can come into a greater significance while under the effect of certain taints – and there’s a lot of RPG-like depth to take into consideration when launching an assault on Soulblight’s dungeons.

Tasks involve running through the area in search of missing pieces which will open the doorway to the next area, and the game records your progress and best times as you go. You’re likely to meet your demise on many an occasion as you play, and fortunately you can hold on to some of your accrued items by stashing them away in storage. Otherwise, you’re starting from the beginning with nothing.

The main issue is that it all just feels so samey. It’s all about moving through the labyrinth, searching chests on the off-chance that they might have the relevant part, all the while avoiding enemies whose line of vision is displayed through a red laser-type visual. Sneaking is encouraged, and performed by holding down the R button, but it’s far too difficult to pull off. In theory, all you need to do is to figure out where their blind spot is, move in close and strike to take them out of the equation.

But enemies turn around when you least expect it, even when you take the time to try to figure out their movement patterns. That in turn leads to a large degree of frustration when they spot you and give chase – at this point your cover is blown, and as you try to make a break for it for long enough to whack the enemy into oblivion, you’re likely to alert other guards as you go in an infuriating chain reaction.

Soulblight doesn’t do too well in generating a personality to connect with the audience. The top-down visuals don’t help, and neither do the consistently dark and dreary environments. If you’ve played a bunch of roguelikes on Switch already, this one’s unlikely to live long in the memory.

Soulblight won’t be for everyone. It’s for those who enjoy making use of their RPG skills to navigate tight roguelike environments. But it’s all rather samey and is unlikely to attract a new audience to the genre.