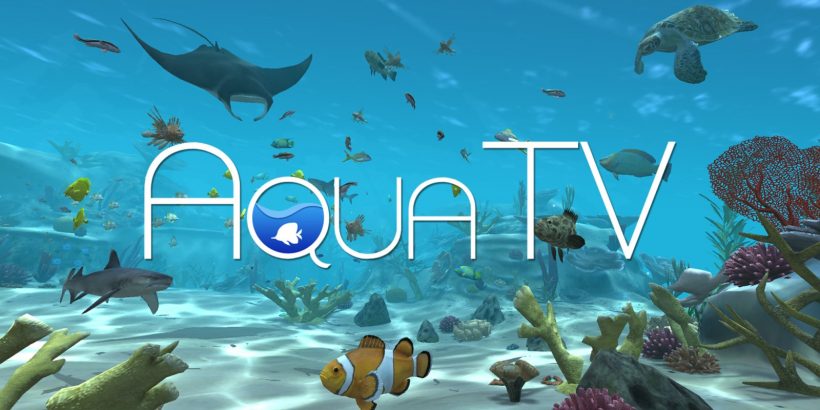 A fish tank without all those pesky real fish.

The virtual pet genre has always had its audience. Nintendogs on the DS, and later the 3DS, was comfortably the most successful option, but games have hit the market which have you caring for cats, horses and even fictional animals. Quite oddly though, it must be said, looking after fish while having your own virtual aquarium was also dreamt up in a board meeting somewhere.

Nintendo’s first experience of this type of ‘game’ was My Aquarium on WiiWare, with the 500 point title even managing to spawn a sequel on the same format. Even Nintendo got in on the act when they brought out Zenquaria: Virtual Aquarium in 2010. A version of My Aquarium was even put out on DSiWare, so there’s clearly a market of people out there buying these games. It’s a market that Aqua TV, previously on the Wii U eShop, is following up on.

Aqua TV allows you to choose from a range of various aquariums of differing sizes (and even an open sea view, before letting you populate it with fish of your choosing. You can add smaller fish to the little tanks, and then the likes of sharks, turtles and sea horses to the open water. Then fiddle with the floor and walls, if you so wish. Once you’re happy with the fish and other creatures setting your scenery, you can add in decorative objects to complete your tank’s look, and then all that’s left to do is sit and watch the creatures swim around.

As the developers stress, Aqua TV isn’t a game. What is clear is that Aqua TV is designed to be a mood setter; something to put on the TV in the background to give off a calm vibe when you’re alone in the house, or perhaps even to give an unobtrusive look of sophistication in the background of a certain class of house party. Weirdly, such is the lack of emphasis on the player’s input on the gameplay, there’s even an option to have the fish and the decorations automated into your tank, taking away the only level of input available to you.

But the question that must be asked is just what the audience is that wants to pick up an application like this. Surely, common sense dictates that those looking to host a higher-class house party will have more than enough money for a real-life aquarium in their house. After all, while Aqua TV prides itself on being presented in ‘glorious 3D’, it’s by no means a HD phenomenon looking quite blocky and doing nothing to really indicate anything other than this being a computer generated tank. What you’d want to see would surely be something along the lines of Dr No’s undersea lair in the eponymous James Bond film – something which adds a touch of class and sophistication. Instead, Aqua TV feels like a computer generated simulation, so really misses the mark on its purpose of being able to replace having some real-life fish in your house.

As a result, it’s difficult to find grounds for which you can recommend Aqua TV on Switch. Offering more of the same if you’ve played the Wii U version, that one’s the cheaper option at the moment, and the easier sell.

Pets at Home have nothing to worry about – there’s barely any reasons to go for Aqua TV over buying real fish. Perhaps an aqua education would have been preferable – it’s just such a light package as it is.