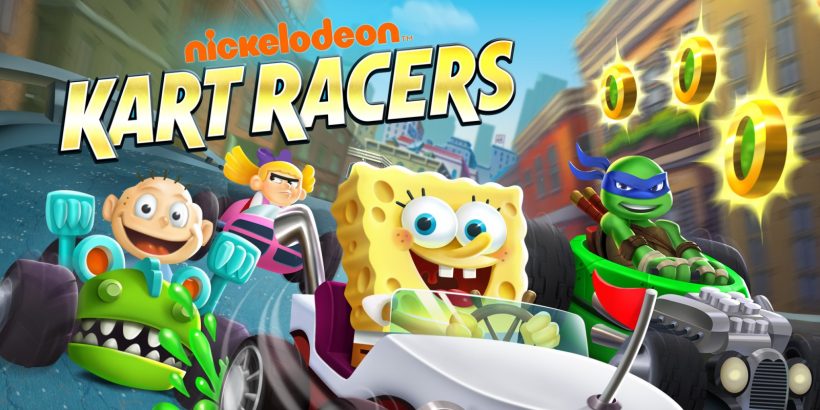 You’ll barely shift out of first gear with this one.

Nickelodeon Kart Racers lets you play as a variety of Nickelodeon characters from various tv shows, including Spongebob Squarepants, Rugrats and more. Once you’ve got past the title screen you can see that Bam Tang Games are trying to create their own kind of Mario Kart, but unfortunately there are quite a few downfalls.

That being said, the game does have a nice selection of characters to choose from. There are twelve in total and each one you can customize with different paint jobs. You can unlock new paint jobs and kart parts by either levelling up or buying them from the shop. Each character has their own style of kart as well based around the show they’re from – for example Tommy from Rugrats drives around in Reptar who you’ll find very familiar if you were a regular viewer of the 90’s show.

The tracks on offer do vary slightly but never really provide enough to keep you entertained – most of them have a pretty lacklustre feel and even the scenery provides very little eye candy. There are three modes on offer which are Free Play, Grand Prix and Time Trial. Free play may be an unfamiliar concept, but it’s exactly what it says on the tin – just standard racing around the track with no competition involved.

There are three difficulty modes for the Grand Prix option, the first two however really have you feeling like you’re driving some sort of under powered golf buggy regardless of what vehicle set-up you go for. They’re painfully slow and make each lap feel like one lap of Mario Kart 64’s Rainbow Road – the original, not the Mario Kart 8 remastered edition! Then you’ve got the hardest setting which has the opposite effect – your kart feels super fast and becomes somewhat tricky to navigate the tighter corners so it seems they had a hard time figuring out a happy medium in that respect.

As you progress through the Grand Prix, you earn experience which in turn helps you level up. This is actually a really neat idea for an arcade style racing game and one that I’ve seen few include. Unfortunately, the way they implement the leveling up system is again painfully slow. Once you reach 100 points you go up a level – however it can take anywhere between 6-8 races to achieve this and when the races are as bland as they are, it doesn’t give you much incentive.

The actual driving is uncomfortable and not user friendly in the slightest. You can drift around corners and boost via slime on the tracks, but drifting seems to be very hit and miss as to whether this command even works. You will be collecting item boxes to take out your opponents along the way as well but with no explanation as to what each one does in the form of a tutorial you’re having to figure each one out, which is frustrating.

I can see who this sort of game has been marketed for – kids will see this in the shops and beg their parents to buy it and at £29.99 you’d expect something of a decent quality racing game here. It’s a shame it’s turned out the way it has as Mario Kart is probably the only fun racer of its genre that stands tall on the Switch – do not go near this one unless you’re looking to be extremely dissatisfied.

Save your money on this one and opt for Mario Kart 8 Deluxe. Nickelodeon Kart Racers is not an enjoyable racer to play and whilst it has some interesting ideas adding an RPG element to the mix, it doesn’t make up for the rest of this half baked package.