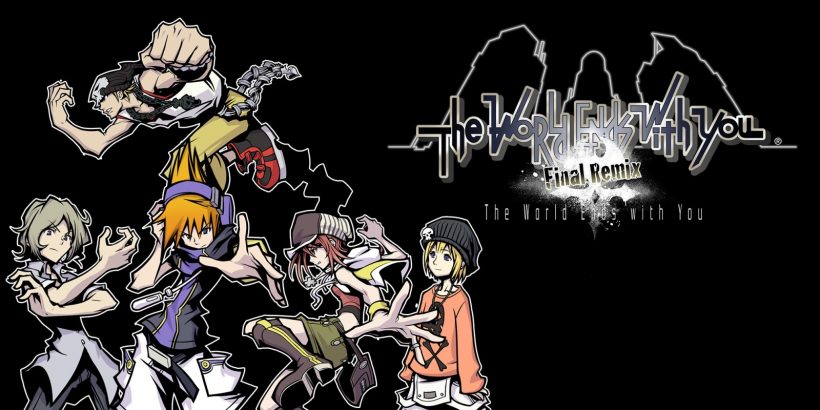 Originally released on the Nintendo DS way back in 2007 (slow down, time), The World Ends With You is a cult hit with JRPG fans. Boasting stylish art design, unique gameplay and a stellar soundtrack, it successfully set itself apart from Square-Enix’s more traditional franchises Final Fantasy and Kingdom Hearts. In recent years, the original DS title has become more and more difficult to get hold of, and with an iOS port that leaves much to be desired, The World Ends With You: Final Remix looks to bring the definitive experience to Switch owners. It mostly succeeds, but some annoying quirks damage its overall appeal for returning players.

The World Ends With You stars Neku Sakuraba, an antisocial teenager who finds himself taking part in a ‘game’ within the Shibuya shopping district of Tokyo, set up by entities known as the Reapers. Failure to complete the game will result in the erasure of his existence. Before long, Neku encounters another participant in the game known as Shiki, and he reluctantly joins forces with her to complete daily challenges and fight off bizarre creatures known as ‘noise’. It’s a strange concept, even for a JRPG, but its unique spin on the genre really helps it to stand out amongst its peers.

Straight away, if you’ve never played the DS version of the game, you’ll notice just how striking the visuals are. The art style has a certain graffiti quality to it, and it really suits the urban Shibuya setting. Character design in particular is impeccable, with bold line art and bright colours making each character feel really unique and memorable. On the flip side, some of the monster design is a bit hit and miss, but it works for the most part. Similarly, the soundtrack throughout the game is absolutely wonderful, and I guarantee that most of the songs will be stuck in your head long after you’ve put your Switch down.

You’ll be given two options in terms of gameplay with Final Remix. In handheld mode, you solely use the Switch’s touch screen for all inputs – none of the face buttons do anything. Docked, you’re required to make use of the Joy-Con’s pointer feature, pressing A to confirm any commands. Undoubtedly, the touch screen controls are far superior and intuitive, but I must admit that I wasn’t particularly enamoured with either control method. I would have preferred a combination of the analogue stick to move characters along with the touch screen for all other inputs, but lumping it all together into one single control scheme felt a bit counterproductive, at least until I got used to it.

Since I predominantly used the touch screen controls in Final Remix, this is how I’ll describe the gameplay involved. To move Neku around the environment, you can either tap on a particular spot and Neku will move to that area, or you can drag your finger along the ground, and he’ll follow with reasonable accuracy. You can then tap on various points of interest within the environment, such as NPCs and enemies. What’s interesting with Final Remix is that there are no random enemy encounters whatsoever – if you want to partake in a battle, you’ll need to find enemies and initiate the fight yourself. However, at various points in the game, battles are mandatory if you want to proceed to the next environment.

The touch screen controls extend further into the battle system itself. You’ll be dishing out various moves via ‘pins’, which you’ll collect more and more of as you proceed through the game. These pins equate to physical and elemental abilities, so for example you can drag your finger across the screen to create a trail of fire, swipe quickly to fling objects at your enemies, or tap to initiate a lightning strike. You also be utilising your partner much in the same way during battles, swapping between your own moves and your partner’s moves on the fly. As you gain more pins, you’ll also unlock additional slots to equip several pins at once. As you progress, it’s well worth experimenting with various pin combinations, but keep in mind that if you use certain pins a lot, these will also level up and become more effective.

Battles can become fairly hectic even during the early stages, and it’s exactly why the Joy-Con pointer controls are so poor. Using a pointer to simulate touch screen controls is awkward at the best of times, but when you’re waving your hand around like a lunatic during battles, it’s quite frankly a bit laughable. Couple that with the inevitable delay that you get between the pointer and the cursor, and it’s more definitely more hassle than it’s worth. It works to a certain point, but a suspect most players will want to opt for the handheld touch controls.

Aside from battling, there are typical JRPG mechanics in Final Remix that help boost its length and appeal. You can go shopping, eat food for boosts, and you’ll even need to keep in mind which outfits to wear or which pins to use in certain districts – wearing the wrong brand of pin can damage its potency, whilst wearing the correct brand will boost your stats. With the Switch version, you’ll also find a brand new side-story known as ‘A New Day’. Well, you might not find it at all. There are certain requirements you’ll need to meet in order to gain access to the new story – it’s not particularly difficult, but those who haven’t played the original DS title may not know where to look, so I’d advise either paying close attention, or just looking it up online.

All in all, The World Ends With You: Final Remix is the same game with a new lick of paint and some weird control schemes. It’s certainly not for everyone – if the idea of playing a game purely with the touch screen turns you off, then you’ll definitely need to look elsewhere. For returning players though, and those with a more open mind, Final Remix is a genuinely engaging, unique JRPG that boasts impressive visuals and a fittingly weird storyline.

The World Ends With You: Final Remix

The World Ends With You: Final Remix is a must for new players who are looking for a deep, rewarding JRPG. If you’ve played the game on Nintendo DS, however, you may find the gameplay options presented in this port a bit of a downgrade from the original.