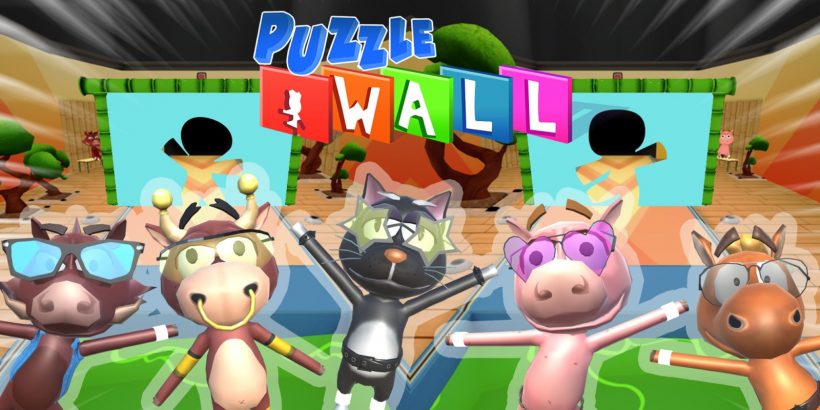 The immortal words of the late, great Dale Winton on the now sadly defunct Saturday teatime gameshow, Hole in the Wall brought themselves a cult following. Winton hosted as a menagerie of D-list celebrities put themselves in a plethora of compromising positions in order to fit through a small human-sized gap in a wall as it hurtled towards them.

What a surprise it was, then, to see Puzzle Wall make an appearance on the Switch eShop this month. It’s even more of a surprise to find that a game of this kind has taken so long to appear, because the premise is a party game dream. With a Joy-Con in each hand (Nintendo’s console is so perfect for these unusual concepts for games), you use the controllers to move the hands of the characters on screen to allow them to fit in the gap in the wall.

Puzzle Wall offers three gameplay variations, the first of which being the single-player Challenge Mode, which has you going after high scores by completing as many walls in succession as possible. Picking from a small selection of animal-themed characters, you can take on four types of challenge – the Classic mode, which brings walls with ever-increasing frequency and ever-smaller holes, is the first and best means of introduction if you aren’t familiar with Dale Winton’s escapades (and shame on you if you aren’t!). Rapid Fire is the next one, and throws two to five walls at you in quick succession, with the poses you’ll need to make shown to you briefly before the walls start coming your way.

Mode three is Memory, which is similar to Rapid Fire except the poses are shown to you but then disappear, leaving your brain and quick wit in charge of making sure your arms are in the right position. Finally, Reverse mode messes with your brain as your character turns its back to the walls, meaning you continue to control the left and right arms with the respective Joy-Con but your perspective is flipped on its side.

Of course, in a party game you want local multiplayer and it’s here: two players can take to the walls for split-screen head to head, which makes for great fun, and then as many as four players can join in the entertainment in Arms and Legs Mode, which has you – you guessed it, taking control of an arm of leg each. It can be a wonderful display of the joys of teamwork, for sure – but this being a party game and human beings being the way that they are, everyone knows that the experience you have with four players involved here is going to be something akin to that of the co-operative tasks in Snipperclips, with players doing their own thing and not having a single intention of doing their bit for the good of the team.

It’s all in good spirits, though – and Puzzle Wall takes a great premise for a party game and executes it well. I’m not fussed on the animal characters, though, and the game could perhaps have used more modes to give it some more of a feeling of depth. But, at just £6.99, it’s not a bank-breaker. It’s certainly one worth looking into with Christmas fast approaching.

Puzzle Wall captures the fun concept of Hole in the Wall, and makes for a great party game experience. It’s not got loads of depth, but it’s great for parties.