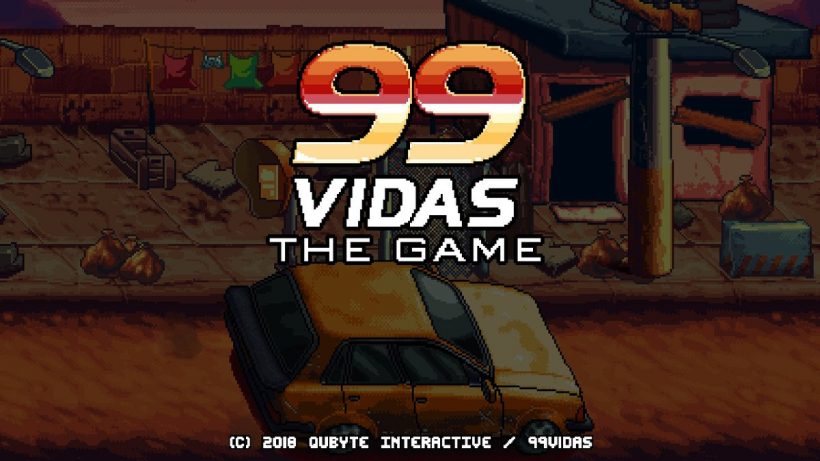 The desire to bring back certain aesthetics, genres, and even feelings from the past is something present at the core of many indie games. That’s especially true about 99Vidas. With an appealing 16-bits pixel art style, the Definitive Edition brings co-op beat ‘em up action to Switch, and comes with tons of references about many games’ tropes, as well as the podcast it is inspired on – yet only a minor audience will be able to perceive this.

Developed thanks to a successful crowdfunding campaign, the whole concept behind 99Vidas was to create a nostalgic gaming experience starred by the members of the synonymous Brazilian podcast. The main focus of the podcast actually is to talk about classic games, so it isn’t surprising to see many different cameos and references on the game. Unfortunately, a good portion of them are based on internal jokes that will only make sense to those who listen to the program. Nevertheless, 99Vidas can still be a funny experience based solely on its old-school gameplay.

With heavy roots on the classics of the beat ‘em up genre, such as Double Dragon, Final Fight and Streets of Rage, 99Vidas puts you – and some friends, if you wish – in control of the guardians of the 99Vidas artifact. This power to have 99 lives was stolen, so it is your duty to recover it from the hands of an evil doer. In order to do that, you must go through different stages, using punches, kicks, and your elemental skills to beat everyone who stands on your way.

At its core, the combat in 99Vidas has the same feeling of the aforementioned classic beat em’ up, but with its own caviar here and there. On most scenarios, you’ll go from left to right, beating waves of enemies to “unlock” your progression. To deal with them, you can perform a light punch combo with Y, a kick with X, a jump with B, and you can also press A to spend your special bar, dealing damage to all enemies on screen. 99Vidas combat is all about crowd control. Your attacks can stun lock most of enemies, but they can do the same to you. Due to that, I feel that the game becomes much more enjoyable during co-op, because some later levels can be very overwhelming when playing solo.

While 99Vidas’ main story mode can be finished in about three hours, the game incentivises multiple playthroughs thanks to its permanent upgrade system, unlockable characters and extra modes. The Definitive Edition gives all options from the previous versions, plus some surprises, so in addition to the story mode, you can replay the game on Arcade, Remix, and Survival modes. However, due to its old-school nature, the main loop of the game can feel a bit repetitive after a while. To add some variation, you can replay the game with many different graphic filters, some of which imitates portable consoles and old screens.

In trying to recreate the experience of a classic beat ‘em up, 99Vidas – Definitive Edition delivers a somewhat repetitive experience. Bring in a friend, though, and you’ll be able to enjoy this nostalgic trip until you try all of its different modes and playable characters.

99Vidas – Definitive Edition takes inside jokes and gaming references and transforms them into a classic beat ’em up experience. Despite becoming a bit monotonous with time, it has plenty of content that can be enjoyed with friends.