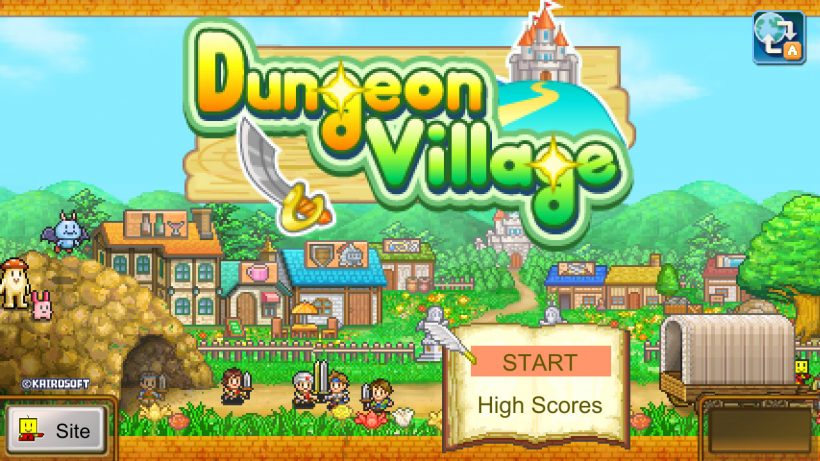 Have you ever roamed around a village in a fantasy RPG and just wished you could tailor it to your exact specifications? Well, neither have I, to be honest. But nevertheless, that’s exactly what Dungeon Village let’s you do. Joining Kairosoft’s Game Dev Story and Hot Springs Story on the Switch, it’s yet another example of how well their titles work on Nintendo’s console. That said, it’s not without its faults. Grab your potions and staffs, folks, let’s dive right in…

Where the two aforementioned games see you take control of very specific business ventures, Dungeon Village is a bit more ambitious in that you start and grow your very own village in the heart of a monster-infested fantasy landscape. Starting off modestly with just a select few establishments, you’ll soon be erecting new buildings and pathways to make your village the most fruitful in all the kingdom.

Like Kairosoft’s other titles, Dungeon Village is purposefully accessible with bright colourful graphics, simplistic menus and catchy music. There’s little depth to the title, but what it does, it does very well. The in-game menu features only three main sub-menus – Build, Adventure and Manage. Build does exactly what you’d expect and let’s you add new structures to your village by spending from your overall budget. Adventure gives you a list of various so-called ‘missions’ to embark on, provided you have sufficient recruits at your disposal. Completing these will bag you more money and items. Finally, Manage primarily gives you the option to upgrade your village, but you can only do this is you meet certain criteria – for example, you’ll need a minimum amount of income and popularity, and you may need to build specific establishments, like a Bakery or Florist.

As mentioned, a big part of Dungeon Village is sending your recruits out into the wild to fend off monsters and complete quests. Their basic ability can be improved as you go along by giving them presents, most of which consist of new weaponry to improve their attack/defend stats. Should they fall during combat, you can quickly heal them with items, but otherwise they might be dragged back to the village to rest, leaving your remaining recruits to fend for themselves.

Basic gameplay on the Switch can be done either with the face buttons or entirely with the touch screen, much like the original release on mobile. For a console sim management game, it works well for the most part – you can easily pick out specific characters or monsters, and you can zoom in and out whenever necessary. Like I said, it’s built to be accessible, so anyone can pick this up, but those after a bit of a meatier adventure might be a bit disappointed.

Graphically, Dungeon Village is little different to Kairosoft’s previous games – the pixellated graphics are decent enough, and the colours really help bring it to life. It loses a bit of clarity the more you zoom in, but that’s to be expected. The music is good at first, but loops back around after maybe 30 seconds to a minute, meaning you’ll be hearing the same tune over and over… and over. Not good.

Much like Kairosoft’s previous titles, Dungeon Village is an accessible management title that oozes charm. It lacks depth, however, and the music can become extremely grating.