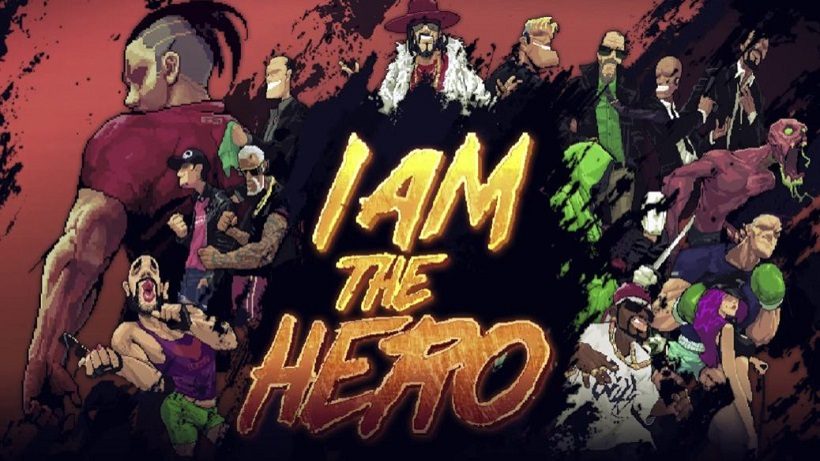 I Am The Hero is another 2D side-scrolling beat ‘em up that also happens to have a pixel visual style. However, it does have one visual flourish that separates it from its forbearers, and that is a slanted 2D pixel style. This might sound like I’m being cynical, but it is actually a nice visual twist, giving the game some additional depth whilst also making it visually distinctive.

Aside from this one distinctive choice, I Am The Hero doesn’t do much to take the genre beyond – or even match up to – the games that defined it over two decades ago. You still move towards the right as you take on a range of thugs, starting off in some dingy urban sprawl before some unknown secret location. So far, so Streets of Rage. But, this is where I Am The Hero realises this is the 21st century and therefore introduces zombies; missing the memo that most players have already got bored of zombies.

The game can be commended for the variety of different enemy types, and the zombies are either their own thing or zombified versions of previous enemy types. This goes beyond mere visual differences with some enemies using some rather frustrating moves, such as setting off multiple wind-up mechanical frogs. As you progress, the game will throw countless numbers of enemies at you at once, ordinarily, this would be its own challenge, except in this instance the frame rate drops (including docked mode) considerably making it much more difficult. You’ll end up blaming the game for your deaths and the solution will be a workaround that ordinarily wouldn’t be the best strategy, but instead, one that will help keep the frame rate up; therefore, go after the spawn enemies.

To take on the range of enemies you have the standard punch and kick moves, as well as a power attack, but you also have what are called EX-Skill special moves which use up energy. These are combo moves that unleash a more powerful and longer lasting attack which is very useful at weakening multiple powerful enemies. The main character starts with one and can unlock more after completing an area. Alternatively, you can instead choose to unlock a new alternative character. These are just enemies that you have already faced, but they do have different attack styles to the main character which can make them useful in some fights. You can swap them in at any time using the R button or they will be automatically called in if your main character loses all their health; effectively making them another life.

Whilst I have already positively remarked on the distinguishing aspect of visual style, I unfortunately, can’t say that the game as a whole does anything more with that. Aside from a couple of instances, the visuals are mostly uninspiring and very forgettable. Accompanying this is a grating faux-metal soundtrack that tries to support the edgelord persona the game seems to be attempting. This also extends to its questionable use of stereotypical depictions of certain groups of society. It’s also highly recommended that you use a Pro Controller, due to its larger face buttons, or ideally a third-party solution that has a better D-Pad.

I Am The Hero

I Am The Hero starts off well enough, but quickly the sheen wears thin and you’re left with a by the numbers beat ‘em up that is let down by its inability to balance difficulty with technical performance.