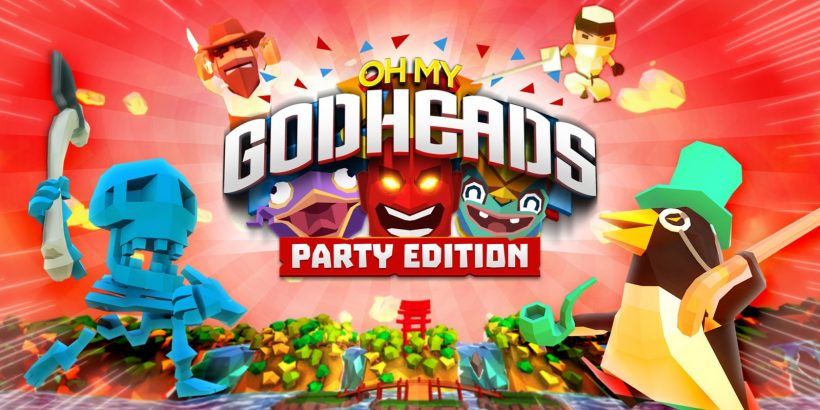 Don’t let the victories go straight to your head.
At some point throughout our collective gaming experiences, we have all experienced that Nintendo magic. The sensual concoction of a specific graphical style alongside meaningful and deliberate audio is not necessarily unique to Nintendo platforms, but the quality of the gameplay hook is, usually, certainly higher. It’s expected now for Nintendo games to have that feeling, yet it’s always a joyous surprise to find a relatively unheard of title – Oh My Godheads, in this case – to replicate that experience with such precision and perfection in its execution, even if the game may not have the staying power needed for all but short play sessions.

So, what exactly is Oh my Godheads: Party Edition? Developed by Titutitech and published by Square Enix, Oh My Godheads is a couch multiplayer whereby two teams of two have to capture the titular Godhead from the middle of the stage and run it to the enemy’s base, thus scaring a point. Each head, of which there are 11, have unique effects that correlate to the design of the Godhead in question; Zeus spits lightning, for example. Each Godhead’s unique abilities introduces something new into each match-up and can change the way in which you choose to tackle a particular match.

The manner in which you and your teammate decide to play each match can often lead to hilarious scenarios, and the constant tug of war that this unique take on the beloved Capture the Flag game mode is at the core of the pleasure that’s to be had. The varying levels force a range of tactics to be employed, and where throwing the head from platform to platform may work on one, a more overly defensive range of moves may be best suited for another.

Unfortunately, that’s where the bulk of the enjoyment abruptly ends. The various other modes at hand are nowhere near as enjoyable, offering mixed results but, as a general rule, of a much lower quality. Deathmatch-inspired modes, such as Last Man Standing and Headhunters, lose the back and forth quality that Oh My Godheads so perfectly pulls off, resulting in much slower and less dynamic play sessions. King of the Head, the last mode on offer, is passable but, again, lacks what makes this game special. Where the previously mentioned deathmatch modes focus on direct confrontation and lack the rush that is found elsewhere, King of the Head is Godheads’ take on the King of the Hill format found elsewhere. You and your chosen companions compete against one another to see who can hold onto the Godhead for the longest amount of time. Holding said Godhead will grant various abilities to aid you in your quest, yet will slow you down considerably, offering interesting mix-ups where, if needed, you must work alongside your enemies to fell the common enemy – and so the battle continues.

As by now it should be obvious, the default CTF mode is indeed the way to go. It certainly won’t hold the attention of most for the same time as other party games may manage, but I assuredly had more fun in the short play sessions I had than I would in most other titles of the same ilk. It’s just a shame, then, that Oh My Godheads: Party Edition’s over-reliance on simplicity in the mechanics department makes this an overly shallow game all around.

Oh My Godheads: Party Edition is a massively enjoyable game that, unfortunately, doesn’t quite manage to hold your attention for extended play sessions. Various game modes are available, yet only the Capture the Flag-inspired mode is worth any considerable amount of time.