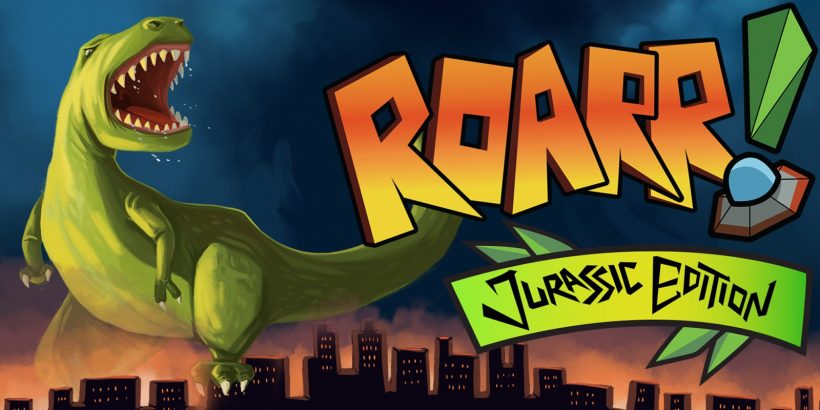 Roarr! Jurassic Edition is a strange beast of a game – and not just because it centres around a sleep-deprived Tyrannosaurus Rex. On the one hand, its main gimmick of having you cause as much anarchy and destruction possible can be quite fun. However, the various locations it sets you in are so lifeless – and your move set so limited – soon leads to vicious bouts of boredom and repetition. In other words, two factors that should never be an issue while playing as a prehistoric dinosaur.

It all begins promisingly enough, with an opening cut-scene establishing you as Sue the T-Rex being awakened from your 65 million-year slumber. The reason? Ginormous mutant squids, of course. Many of which look to ruin your day by descending on the local towns above and wreaking habit. It’s a silly enough premise that fits in well with Roarr!’s quirky sense of humour and polygonal art style, but the story here is really just a means to get you causing chaos as quickly as possible.

You’ll make your way as Sue through six levels, each one unfortunately being just as empty and bland as the last, battling the various squid army members by alternating both light and heavy attacks. All of this is made immensely more enjoyable when jumping in with up to three other friends, seeing each of you destroy your surroundings, as well as the attacking invaders, to keep your combo meter up and place high on the in-game leaderboard.

After a few mad dashes through the odd tropical island and frozen Antarctic, however, monotony soon starts to set in. Sue’s two core attacks and special ground pound are simply not enough to keep the combat interesting. Enemies can also feel like they require one too many hits before they evaporate before you too, despite the 20 or so distinct types. This would all be well and good if the environments were in the slightest bit interesting, but the abundance of vast, empty space is a bit of a problem for those looking to fulfill their Jurassic fantasies. 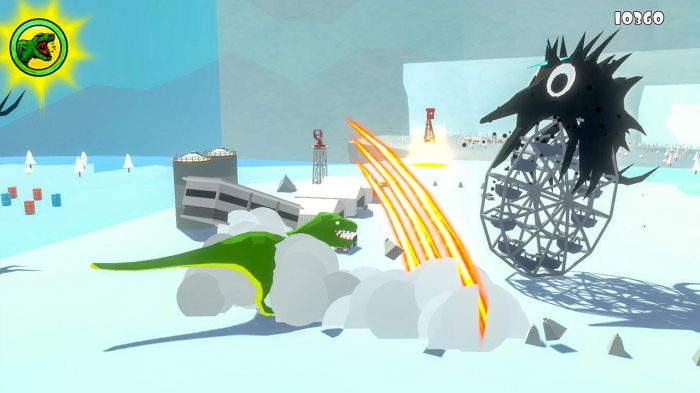 The only means you have to entertain yourself after seeing all that Roarr! has to offer s by dressing Sue up in the various costumes available, but that’s still only an aesthetic change. Most of them are funny, quirky, and fully align with the sort of madcap action the game seeks to provide, but its very slim pickings in an experience that should be all about big scale on the big screen.

Roarr! Jurassic Edition delivers on its simple enough premise perfectly well, but unless you have up to three friends willing to wreak destruction with you, it soon grows tiresome. Thankfully, the controls are basic enough that breaking off a Joy-Con doesn’t feel like a compromise. It could have been great, but this Switch version fails to live up to its self-proclaimed ‘Jurassic Edition’ moniker.

Causing chaos in Roarr! Jurassic Edition is fun for a short while, but saving the world from squids as a sleep-deprived dino soon grows tiresome.