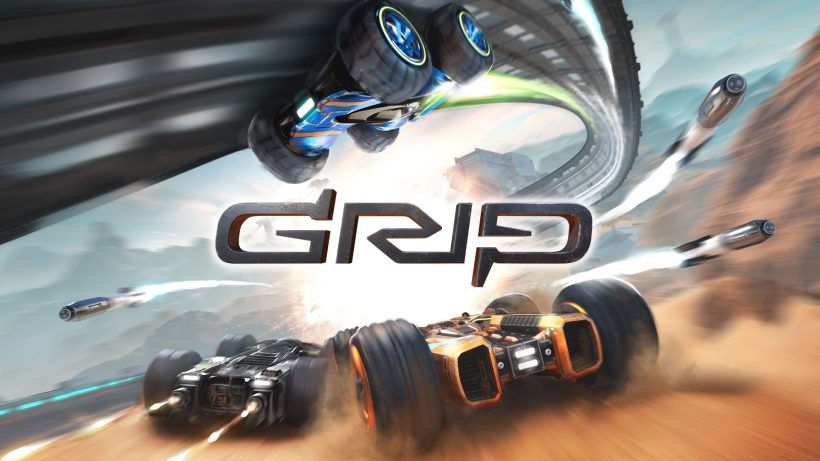 Disclaimer: Prior to its release, I scored GRIP: Combat Racing 2.5 out of 5. At the behest of the publisher, I have since altered the score to account for the game’s day one patch, which addressed one of the main issues I had with the experience. As such, the final score below reflects the experience that players will get after installing the day one patch.

After eighteen months on the market, the Switch still feels a bit starved of great racing titles. Since the early release of both Fast RMX and Mario Kart 8 Deluxe, there have been a few new releases, but none of particularly notable quality (and Rocket League doesn’t count!). GRIP: Combat Racing hopes to rectify this, boasting a unique premise containing a wealth of content to play around with. But does it succeed? Well, yes and no. It’s undoubtedly a fun racing title, but it does have a few issues that hold it back from being a must-have title.

Taking influence from 1999’s Rollcage, GRIP: Combat Racing features compact vehicles sporting huge wheels, which means they can ‘grip’ any surface, regardless of their orientation. To put this into better context, if you happen to suffer a particularly nasty crash, it doesn’t matter if you flip over a number of times, you’ll be able to carry on racing pretty much straight away, provided you’re facing in the right direction. This also means the tracks themselves are a bit more outrageous than what you’d be used to in your standard racing titles. They’ll loop around in all sorts of directions, and gravity becomes a thing of the past as you speed across walls, ceilings and around cylindrical tunnels. It’s a novel concept, and when you’re racing across the track at top speed, it’s genuinely quite exhilarating.

Of course, it wouldn’t be combat racing without a few weapons either. As you race along, you’ll encounter green pickups which grant you a weapon or ability. Offensive weapons include mini-guns, homing missiles and more, whilst other abilities include a rear shield to protect from other racers’ weapons, and boosts to your vehicle’s speed. You can carry two abilities at once, each of which is assigned to L and R respectively, so you can choose which one to use according to particular situations.

Prior to a day one patch, the game ran really quite poorly, and wasn’t an experience I’d heartily recommend. The frame rate was patchy at the best of times, and thanks to the gameplay’s fast, twitchy nature, this made moment to moment experiences more frustrating than they had any right to be. To exacerbate this issue, the game’s camera will also occasionally glitch, flipping around or jutting from one side to another, meaning you’re completely thrown off balance, inevitably leading to being thrown off the track.

The patch has thankfully alleviated the frame rate issue somewhat, leading to a smoother experience for gamers looking to pick up this game, but the camera problem is still present (though not quite as much). If this gets patched at a later date, then GRIP could genuinely become one of the Switch’s top tier racing games. Right now, though, it’s simply ‘good enough’ (which really isn’t good enough, when you think about it).

I have to give it credit, however, for the sheer amount of content on offer. It really is quite astonishing. First up, there’s a campaign mode, which contains multiple tiers to make your way through. Each tier contains three tournaments, and each of those contain three races. There’s a lot to work your way through, and some of the challenges can become a bit repetitive. It does, however, provide decent challenge from the off, and with certain races you’re limited as to what kind of abilities you can acquire, meaning you’re forced to focus on pure speed and skill. 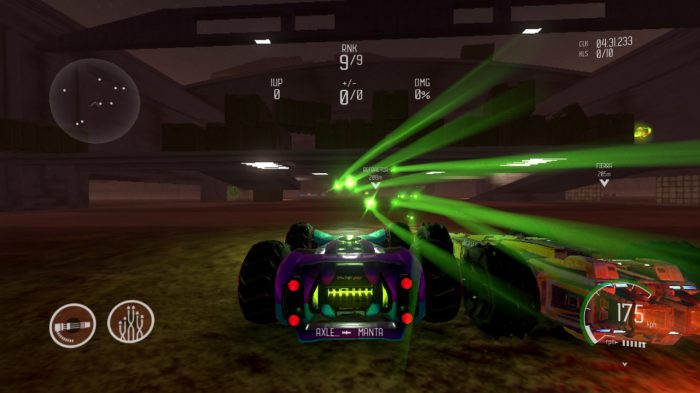 Next up, there’s a basic single-player mode. Here, you can choose from a number of different variations to take part in. Classic Race contains weaponry and abilities, but your speed is what counts the most. Ultimate Race, however, favours your ability to use offensive weapons effectively. Elimination Race is an interesting one – a countdown timer will constantly threaten whomever happens to be in last place. Remain in last place when the timer reaches zero, and you’re out. This continues until there’s only one remaining racer. There’s also a basic Time Trial mode which needs no explanation, and the Speed Demon mode, which removes weaponry entirely.

That’s not all, though; in Arena mode, the game pits you against competitors in a sort of ‘battle mode’, similar to Mario Kart. There’s a basic Deathmatch in which you must destroy other racers with weapons until you come out on top. Steal the Stash sees you and your team stealing the enemy team’s loot. And finally, Time Bomb requires you to avoid the player carrying the bomb, which will explode and destroy any nearby racers at the same time. 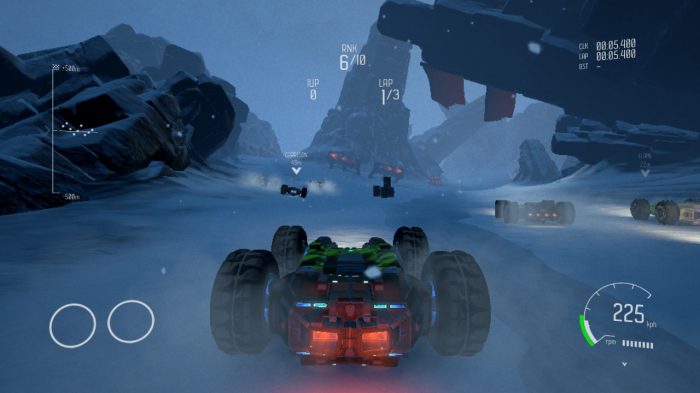 The final part of the single-player experience is a quirky little mode called Carkour. Basically, it’s ‘car parkour’, and you’ll need to tackle a number of levels which require you to accurately navigate increasingly difficult tracks, requiring you to jump and use your boost with near-perfect timing. This is a frustrating mode at the best of times – one wrong move will throw you off the track, forcing you to start over from scratch.

There is also an extensive Garage option to play around with if you don’t particularly feel like racing. Here, you can pimp up your ride however you see fit. You can change the vehicle’s basic chassis, upgrade to better (read: cooler) wheels, and apply various colours and decals to really make it your own. Racing in the campaign and single-player modes will also allow you to level up, and the more you level up, the more customisation options become available to you.

If the devs hadn’t patched out the issues I had with GRIP prior to its release, I’d encourage you to actively avoid it. Thankfully though, the experience has been improved quite substantially, and whilst it certainly isn’t a must-buy, it’s at the very least a competent, often fun, racing game.

GRIP: Combat Racing boasts exciting gameplay that is sadly held back by technical issues. It’s worth a look into for fans of racers, but other folk may want to wait until a price drop.