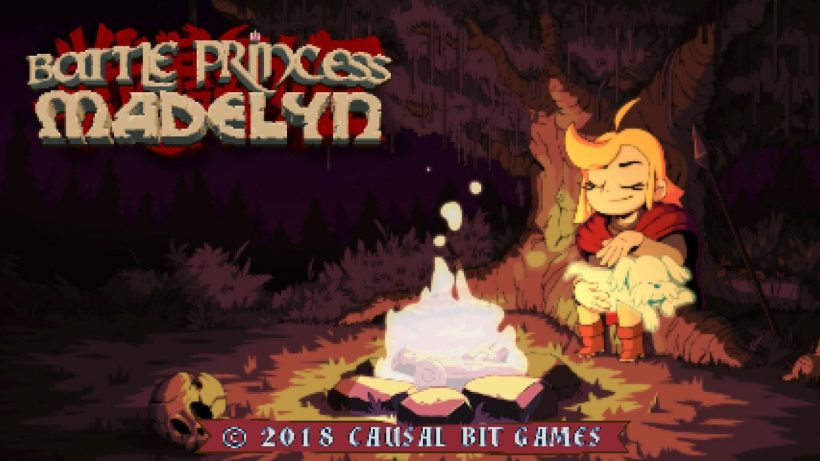 When playing indie games, it is often possible to see their many little nods to certain classic titles. Cosmic Star Heroine, for instance, is full of Chrono Trigger references. YIIK is clearly inspired by Earthbound. 99Vidas aims to be a modern Streets of Rage. On a similar fashion, it is impossible to talk about Battle Princess Madelyn without considering its roots – especially with a game that looks and feels so much like a lost title from the Ghosts `n Goblins series.

Developed thanks to a successful Kickstarter campaign, Battle Princess Madelyn proposes to bring back all the arcade feel of a classic fast-paced platformer while at the same time adding some improvements seen in modern games. The game has two separate modes, where your shoot ‘n’ run skills will be put to test. Both see you control Madelyn on a series of platforming levels. Her basic set of skills include a jump and an attack. As you progress, you can unlock better equipment, new magical powers, and other manoeuvre improvements, such as a double jump. Despite the similar core mechanics, each one of the two modes of Battle Princess Madelyn provide very distinct experiences.

Arcade, the first and simpler of the modes, provides a more straightforward experience, taking Madelyn on a sequence of very linear levels, defeating the many enemies and progressing as far as possible. If you crave the classic experience of a game from the Ghost ’n Goblins series, then you’ll find it in full style here.

The main meat of Battle Princess Madelyn lies in its History mode, though. After a superb hand-drawn intro cutscene, you’ll be free to explore the game’s fantasy world in the search of your kidnapped family. Instead of the linear structure of the Arcade mode, all the levels have many branching exits, with secret items, collectables and power-ups to be found, in such a way that resemble some metroidvanias. Unfortunately, though, this open-minded philosophy clashed with the classic gameplay of Battle Princess Madelyn.

Despite having a beautiful 16-bit pixel art, with astonishing detailed environment, the game does’t do a good job in creating a distinct interconnected world. Once you enter a different level, it is very hard to distinguish where exactly you are, as the game has very few landmarks. In addition to that, enemies’ respawn rates are very high, similar to how they are arcade mode, so you’re constantly being pushed forward. These factors detract from the exploration experience.

Disregarding the problems, though, with gigantic bosses and fun classic gameplay, Battle Princess Madelyn still has something for those interested in the Ghouls ‘n Ghosts kind of arcade experience.

Battle Princess Madelyn seeks to emulate the likes of Ghouls ‘n Ghosts, to some success. The old-school gameplay may hinders the modern elements from its History mode, but the game still delivers a fun experience.