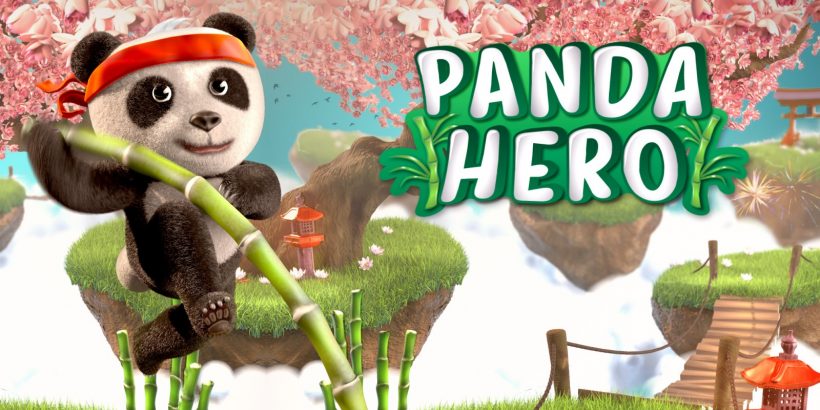 It takes little time at all to figure out where Panda Hero took its inspirations.

You play as a panda wielding his weapon of choice: a green bamboo stick. The game is a platformer in the traditional sense, with the aim of the game to try and make your way through two-dimensional levels, left to right, to the goal point. This already sounds like one of the more notable platformers of all time, for sure, but then loads of games have taken inspiration from the classics. But from the question mark blocks to the pipes littered across each stage, Panda Hero is far too much like Super Mario Bros. for my liking. That’s because this game lacks any of the style or credibility that Nintendo’s number one mascot carries.

There are four worlds to play through, titled Mountain, Underground, Sky and Winter. Irritatingly, there’s no gameplay differences which set the worlds apart; it’s really just a new lick of paint that represents the differences between them. The Mario nods continue throughout the game, including  blocks forming a staircase leading up to the goal at the end of each level. But there are new takes on that formula – you have a health gauge, which you can fill up by consuming fruit which can be found throughout the level including from within ? blocks (yes, another thing pinched from Mario).  But Panda Hero essentially borrows a lot of ideas and executes them terribly.

Some of the platforming elements, such as the wall-jumping, are disjointed and broken; there’s hardly even an animation for your time hugging the walls. Enemies are placed in some really awkward places, meaning you’ll need similarly awkward jumps in order to use your bamboo stick to shoot pieces of fruit at them, with the likelihood for lamely falling of the stage heightened. There is a boss battle at the end of each world but the term “boss” should be used incredibly lightly. They are insanely easy and make use of zero ingenuity.

But icing on the cake is the astronomical cost that Switch players are being charged, especially when compared to what players of other consoles face. We have to stump up an astonishing £26.99 for this dud; elsewhere, people are paying a max of £15. It’s perhaps the worst example of the “Switch tax” yet; this writer can honestly say Panda Hero is the worst game I’ve played on the Switch to date. There is no originality, the platforming is broken, dull and repetitive and the overall presentation is bleak, to say the least. Go and buy New Super Mario Bros U Deluxe or even Monster Boy and the Cursed Kingdom instead for a similar price. You’ll find a lot more enjoyment there.

Panda Hero is an abomination of a game and is fully deserving of a bad review. We feel sorry for the collectors who have to pick it up.