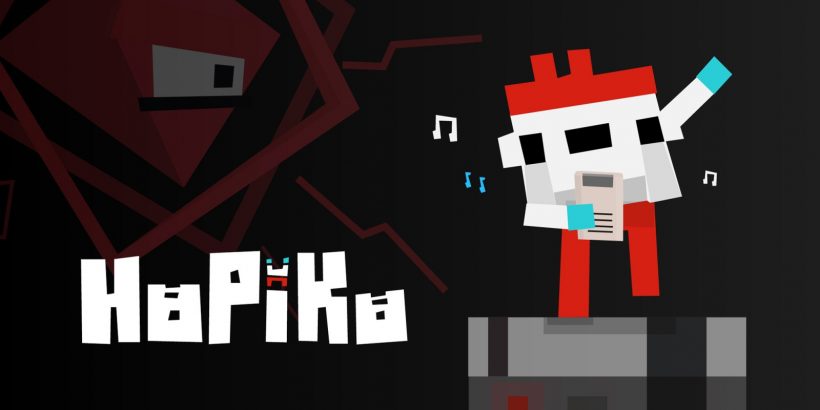 HoPiKo is a frantic game where the objective is to blast yourself from one platform to another with the aid of super high-powered jumps. The player character sticks to the surfaces which he collides with, and cannot move to adjust his position, so the game is all about timing your speedy jumps perfectly.

Such is the force of the jumps that some platforms will start to rotate after you jump into them, and the speed of this rotation is dependent on what part of the platform you strike. It’s all set on a physics base, so if you were to imagine a rectangular platform, hitting it towards the centre of one of the long sides would generate minimal spin, but landing towards the end of the long ends would carry considerably more trajectory.

The game is split into spurts of five levels, where one wrong move in any of them will send you to the start. Colliding with any enemies, hitting any walls which you’re not meant to or to simply mistiming a jump and careering into the stratosphere will all result in restarts, and that’s why inch-perfect precision is the key element in HoPiKo’s platforming gameplay.

As you progress through the game, your surroundings will react differently – while some will slowly spin depending on where you hit them, others will immediately perform a sharp 180 degree turn and have you facing in the opposite direction, which makes for some thoughtful decisions on the behalf of the player. Every level has you trying to reach an area which is often surrounded by enemies, meaning only a perfectly timed jump will get the job done, but it’s not a linear experience; there will usually be more than one way to solve a level, so HoPiKo is likely to be a popular experience for the sort of crowd who appreciate trickshots and other impressive manoeuvres.

HoPiKo does take place at a frantic pace and that is likely to be an acquired taste. You never really get the opportunity to just sit back and appreciate the intricacies of the game, even if you’re watching someone else play. It’s more of a jump-jump-jump-crash sort of experience, with the margin for error getting more and more fine as you go on. But that’s really the game’s big strength – difficulty is at the forefront, and there’s even a hardcore mode to make the challenge even more miserly.

Such is the precision needed in a game like HoPiKo, the Switch’s Pro Controller is the input mode of choice – like in first-person shooters, the Joy-Cons analogue sticks just don’t feel accurate enough. Having the Pro Controller does mitigate this a little, fortunately, but there always is the sense that there is room for improvement in terms of having greater power over the controls.

You can tell the developers put a lot of time into HoPiKo, and for that they should be commended. But we’d have liked to feel more in charge of the controls.