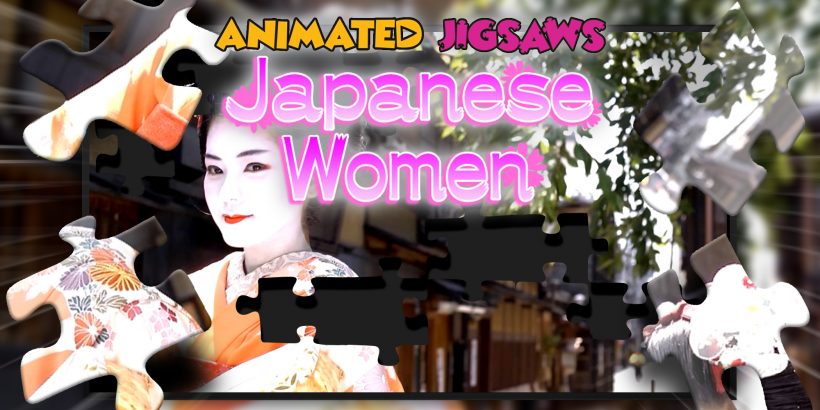 The Switch continues to make strides as the medium of hosting other mediums. Much like the DS a decade ago, the functionalities of Nintendo’s latest console have lent themselves perfectly to a myriad of different game genres, and is particularly effective when executing titles that are suitable for the ‘casual’ crowd.

Jigsaws, of course, are accessible to anyone. From a developer’s point of view, jigsaw video games must be pretty easy to make, so it’s a surprise that we don’t see more of them. This one, Animated Jigsaws: Japanese Women, follows a second jigsaw puzzle title from Rainy Frog which was based on Japanese scenery. As such, it looks like this title is more focused on men, or women of a certain persuasion.

This is no smutty experience like a Gal Gun 2 or a Senran Kagura, though – the women pictured in the jigsaw puzzles here are all quite elegant, usually clad in traditional Japanese attire. This is more ‘art’ than an excuse to enjoy looking at pretty women, but that’s unlikely to be enough for it to bridge the gap to more wider audiences.

Animated puzzles, of course, are moving pictures; almost like a gif. This makes it more of a challenge than a standard puzzle, as you’ll need to watch carefully each repetition of the video loop in case you spot any notable moving objects that will help you piece things together. Early puzzles are limited to a reasonable 60 pieces, and do present a satisfying challenge. Clearing them unlocks a 120 piece puzzle of the same image. Taking things up to 240 pieces really ups the difficulty, particularly when you have to shift so many pieces out of the way of others with your finger.

The reason for that is the size of the Switch screen. You want to be playing this in handheld mode, for sure – dragging a cursor around on the TV would be a nightmare and would take ten times as long – but the touch capabilities of the console aren’t quite precise enough to stop you from accidentally touching the wrong piece several times and then accidentally placing one piece on top of another. Pieces automatically lock into place if you place them on the correct point on the board, even if you’re only taking a guess, but the difficulty comes in just selecting the right piece in the first place. You can shuffle the pieces into end pieces and centre pieces, which comes in handy.

The game’s music does hit the right tone – Japanese sounding in origin and at a gentle pace as you pass the time. You can quite easily spend hours at a time on the bigger puzzles – but given the subject matter, it’s likely this will only be for a certain type of player.

Animated Jigsaws is fun enough to pass the time. Some tricky issues with managing so many pieces on the touch screen were always likely to exist, but at least it’s pretty enjoyable.