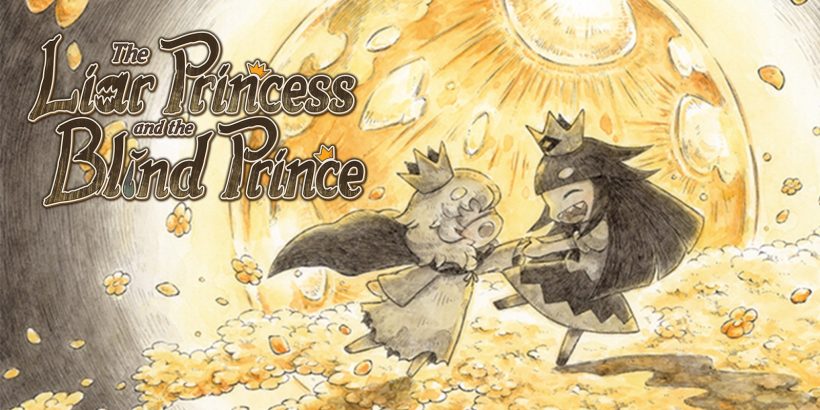 As the gaming industry grows, the standard approach for many developers (AAAs, in particular) is to deliver experiences that are simply bigger and longer – titles that burst with content, and mixes elements of many different genres. These convoluted games are so common nowadays, that it is a nice surprise when you discover a game that is more focused and short, and, despite that (or maybe because of that), still manage to touch you profoundly. That is exactly what you may get with The Liar Princess and the Blind Prince.

This Nippon Ichi title tells a fairytale-like narrative that takes the form of a puzzle-platformer. As its title suggest, the two main characters are the unlike couple formed by the Liar Princess and the Blind Prince. The liar aspect of the Princess comes from the fact that she is, in fact, a wolf that was magically transformed into a human. The Prince, as it happens, has become blind due to a unpleasant accident involving the wolf. Decided to help the Prince and undo her actions, you’ll control the Princess on their journey to meet the witch of the forest, and recover the Prince’s vision.

Despite having direct control over the Princess, the player needs to overcome many different obstacles and enemies and bring both the Princess and the Prince to the end of the stage. In order to to that, there is a dedicated button that must be pressed to hold the Prince’s hand. Due to this mechanic, the main reference for the kind of gameplay and experience that you’ll find with TLPatBP is definitely Ico. Similar to Yorda, the Prince is a weaker character that must be protected from the perils of the level, while the Princess, can transform herself into the wolf form and deliver powerful blows to enemies.

TLPatBP is very inventive in its presentation of interesting puzzle segments involving the skills (and lack thereof) of both characters. Its main campaign can be finished in about four hours, but at each stage the game introduces a new mechanic, skill or concept. Unfortunately, though, TLPatBP has some flaws when it comes to its platforming segments. At times, the handling can feel a bit clunky and unresponsive, which can result in unfair deaths. Thankfully, the game has plenty of checkpoints, which helps to somewhat alleviate this frustration.

TLPatBP’s presentation is probably the most outstanding aspect of the game. Its orchestral soundtrack beautifully complements the fairytale experience, while on top of that, the whole game is presented in a very unique hand-drawn style that mixes different drawing styles between the gameplay and narrative sections. From simple sketch-like segments to awe-inspiring detailed landscapes, The Liar Princess and the Blind Prince hits some unique artistic notes. It may be a short experience, but it’s an ever-lasting one.

The Liar Princess and the Blind Prince

The Liar Princess and the Blind Prince delivers a short but heartwarming experience that, despite having some flaws in its gameplay, really sticks with you after the ending credits thanks to its beautiful presentation.