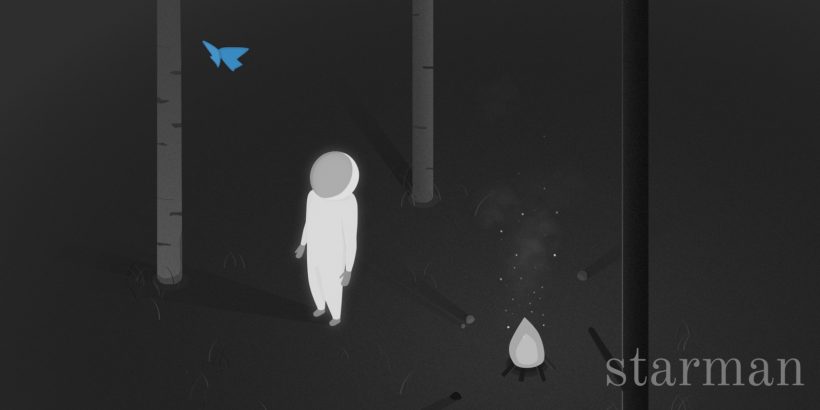 Sometimes the most satisfying puzzle experiences in gaming come when they’re kept simple. Starman, from Nada Studio, is presented in just about as simplistic a fashion as possible, with puzzles for the large part contained to what you can see on the screen, and the entire game making use of light despite its consistent black and white look.

For most of Starman, your mission is to twist dials, move blocks and create platforms which allow you to progress to the next area. Some blocks are jet black, while others are crystal clear: it’s these crystal clear blocks which usually provide the game’s main puzzling element, as you need to find a way to get them in front of sources of light in order to illuminate them into a solid white to make them usable as platforms or as sources of electrical power to use switches that open doors to allow you to progress.

But sometimes, those sources of light are out of reach, and so you need to find a way to bring the block to them, or vice-versa. That’s where the planning element comes in, as you prod buttons and spin dials to manoeuvre the environment and attempt to get a clear path. Tougher challenges later on require you to bypass energy-sapping beams, and again using the environment to your advantage provides for the solution.

That’s the crux of Starman – your little spaceman character picks up a box here, drops it there and hopefully opens some doors as a result of doing so. Tricky levels throw conveyor belts at you which need to be timed cleverly to bring blocks within reach, while others rely on timed sections from pushing a button, so you could need to map out a plan of attack before you start pushing every button and pulling every lever you can see.

This game has the feel of the sort of indie titles we were getting when the Wii U eShop was in full swing, with minimal controller input alongside even more minimalistic yet crystal clear presentation. But the issue with games of this kind is that too often they’re more about style than they are substance. That’s a feeling which Starman can never seem to shake off.

There’s some clever puzzling in Starman, but at under ten levels it’s a little light on content. The less said about the controls, the better.